Minimates are iconic popular culture characters in blockish form, just over two inches tall. They are surprisingly articulate and detailed given their small statue, making them great to stage for action poses and keep as display pieces to show off on your desk or shelf. Think of them as slightly larger and more detailed Lego figures

Minimates often come in packs of two to four, making them great for scene reenactment. The latest releases from Minimates are Star Trek pairs, and I got in to review a pair from my favorite Trek series: Captain Sisko and a Jem’Hadar from Star Trek: Deep Space Nine.

Each figure has 14 points of articulation: ankles, knees, hips, torso, wrists, elbows, shoulders, and neck. The hips and shoulders have a surprising range of motion, thanks to being stuck on a round peg. Most of the figure also comes apart. The pair comes with two weapons each – a hand phaser and a phaser rifle – and a clear plastic base to stand upon, mounted to the figure by a peg which fits into either foot. Each figure also has a place to keep their hand phasers on their person – a peg for Sisko and an actual holster for the Jem’Hadar. 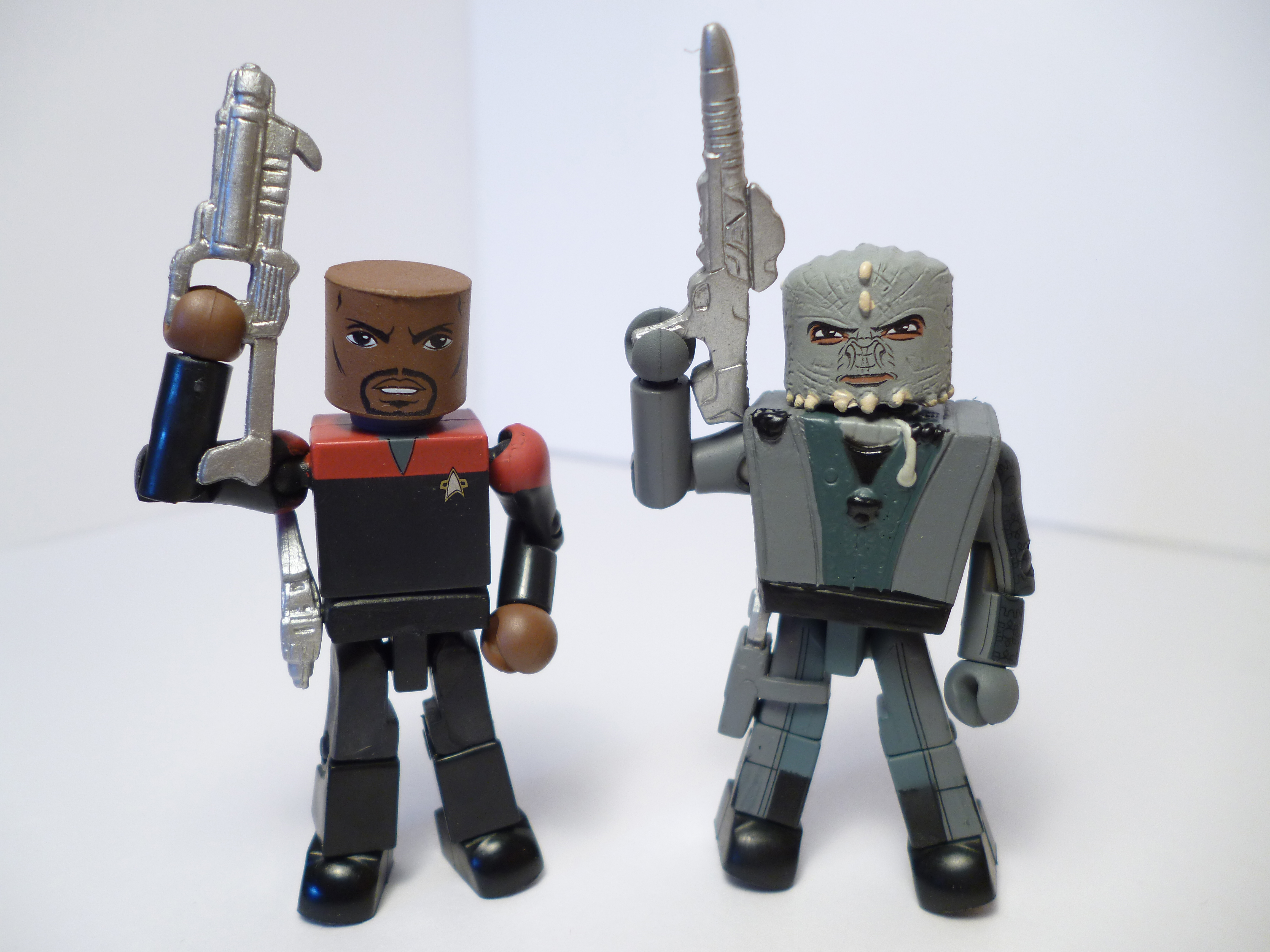 The figures themselves, despite being just blocks and cylinders, are spot-on recreations of the characters. As nice as Sisko is nailed down all the way to the baldness and goatee (from season four onward), the Jem’Hadar soldier is the one detailed to impress. The head is textured with the bone protrusions, scales, and hair knot in the back. The armor even includes the ketracel white tube the Jem’Hadar needs to survive.

I had a fun time setting up some scenes with these two. For those unfamiliar with DS9, Sisko and Starfleet are at war with the Jem’Hadar for a large part of the series. As such, pitting the two in combat with each other is a no-brainer. As are scenes where Sisko runs off in glee after stealing the Jem’Hadar’s chest armor. Sure, it didn’t happen in the series, but I’m sure it happened between seasons.

The only problem I have with these figures is the feet come off easily. One of Sisko’s falls off over and over again. The feet are pegged into the bottom of the legs, but they aren’t snug enough to stay in. Hopefully this is an anomaly in my specific two figures, but it makes it difficult to keep Sisko standing, even with the help of the base. The slightest bump will knock him over. An easy DIY fix would be some cheap glue in the peg hole.

Also something to look out for – losing accessories. They’re tiny, especially the phasers, so be sure to keep track of them. Same with the limbs that may fall off and the plastic bases. Heck, I lost one of the plastic bases in the course of the review.

Overall though, as long as you can keep track of everything and deal with loose appendages, these are some cool mementos to play with on your desk while you avoid work (like writing this review).

The packaging here is calling to be opened. Often Diamond will bring their collectables to life with creative packaging as well as the toy inside. What we have here is basic because these little guys aren’t meant to be jept mint in package, they’re meant to be played with! 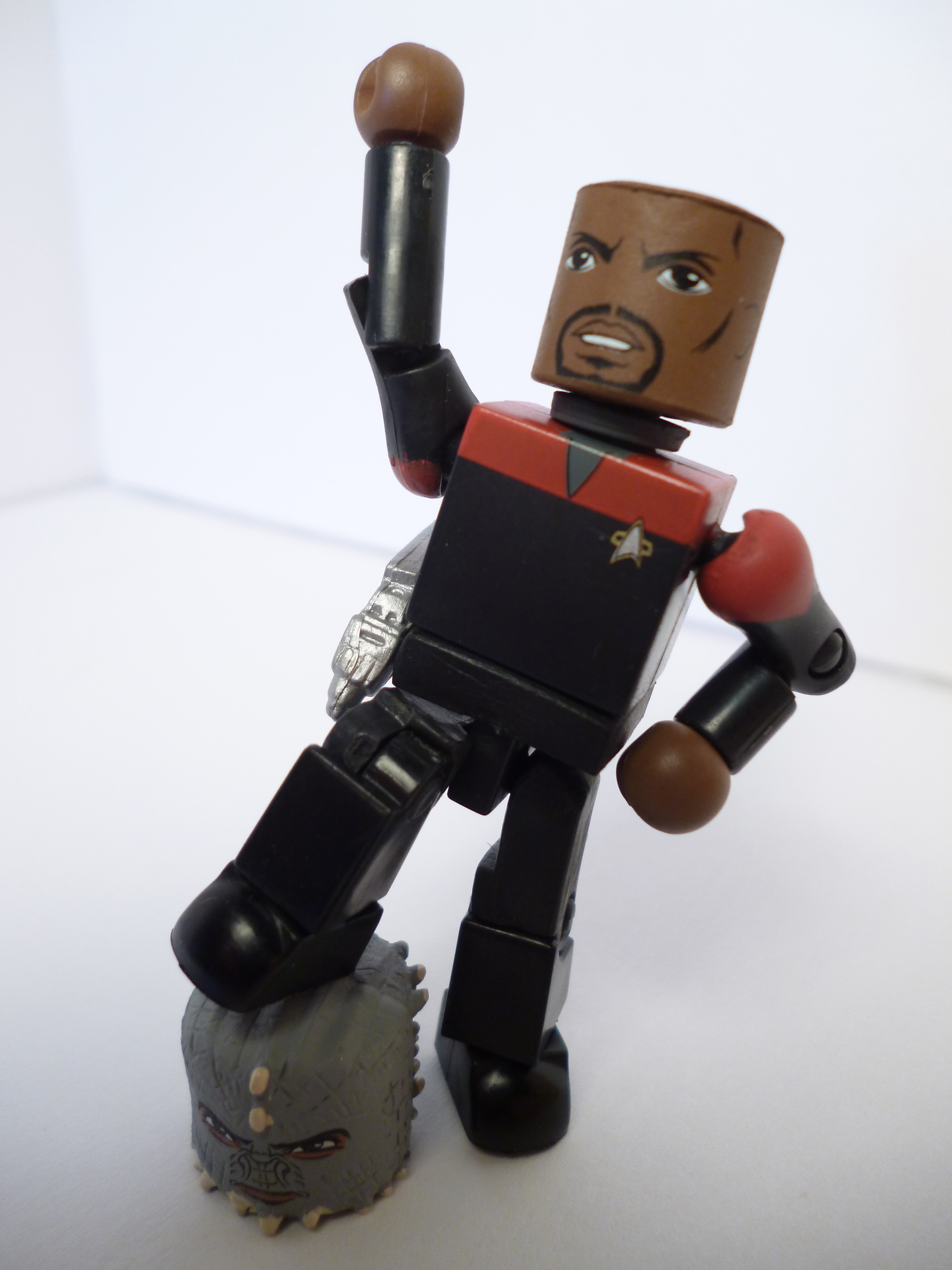