Chambara (Sword Play) and Jidaigeki (Period Drama) film fans owe a debt of gratitude to the good folks at Animeigo for keeping us supplied with great films. The Sleepy Eyes of Death film series is legendary, albeit hard to locate. That is until Animeigo. They have recently released the first four films in this series in a box set and I happily gave it a try.

The Sleepy Eyes of Death film series follows the adventures of Nemuri Kyoshiro (Raizo Ichikawa), a masterless samurai who is known as ‘The Son of the Black Mass” and the master of the full moon cut. Sounds good: Count me in!

So, here is a breakdown of each film included in the box set:

In the first installment, the audience is introduced to Nemuri Kyoshiro (Raizo Ichikawa). As the film opens, Nemuri is fighting a group of assassins. He takes care of them so efficiently; he is soon offered an assignment by the group’s leader, Lord Maeda. Maeda even sends over a woman to sweeten the deal.

Nemuri doesn’t trust all of this so he checks out Lord Maeda’s enemy, a man named Chen Sun (Tomisaburo Wakayama Lone Wolf and Cub).

Soon, Nemuri is weighing his options and making sure everyone knows that he doesn’t like anyone and doesn’t trust anyone: a man after my own heart.

While the pacing is a bit slow, things build to a nice conclusion and it definitely gets the audience hooked on Nemuri and ready for his future adventures.

Nemuri shows some impressive sword tricks in this film by undressing a woman by using his sword. After that heart pumping experience, he is soon protecting a member of the Shogunate from an ememy and getting pursued by one of the Shogun’s daughters.

It isn’t long before Nemuri has a host of enemies and thugs out for his blood and he is going to have to use his sword and his wits to settle the score.

Again, Raizo Ichikawa is fantastic in his portrayal and brings a nice amount of “anti-hero” to the role. He shows that his motivation isn’t always selfless. Rather, Nemuri is more motivated by self interests and selfishness, but can still have a desire to help others.

In the third installment, Nemuri has to contend with a nasty man who kills peasants just to test the quality of his sword. This is no ordinary jerk; he is the illegitimate son of the Shogun.

Nemuri, once his sword is returned to him, gets to exact revenge for the callous act and prove to the villagers that he is not affiliated with this evil man. But before you start clapping Nemuri on the back for being so virtuous, it isn’t long before he is forcing himself on some of the Shogun’s women, enjoying intimidating her as much as “romancing” her, if you know what I mean.

Remember, Nemuri isn’t an upstanding man. He is deeply flawed. He is much more “The Watchmen” than “Superman”, to use a comic book comparison.

Nemuri has a lot going on in this film. He ends up emotionally involved with a woman whose husband is in jail and when he is released, Nemuri has a difficult ethical decision to content with. What decision will Nemuri make?

Again, The Sleepy Eyes of Death films just get better and better and Raizo Ichikawa continues to dig deep into the character of Nemuri and the audience is continually rewarded by his efforts.

As the fourth film opens, Nemuri is dealing with the wicked Princess Kiku, who likes to get servants hooked on drugs, and then force them into withdrawal just so she can get a kick out of killing them and dumping them in the nearby river. What a catch Princess Kiku is! How can Nemuri resist?

Soon, Nemuri is not only fighting Kiku and a various assortment of thugs, but also the Shogun, drug smugglers and the return of Chen Sun (Tomisaburo Wakayama).

What is a masterless samurai to do?

Again, Nemuri’s fantastic “dark nature” is featured nicely in this film and Ichikawa, once again, turns in a fantastic performance. The choreography of the sword fighting is top notch in this film, continually getting better in each film. This film sets you up perfectly to anxiously await the 5th installment in the film series.

What more can I say about The Sleepy Eyes of Death series? Any self respecting Chambara fan will add this to the collection quicker than Nemuri can perform the full moon cut!

Presented in Anamorphic widescreen, the films are well transferred here. The overall image is crisp and the color palette is strong and natural. I did not notice grain or artifacts.

Presented in the original Dolby Digital mono with English subtitles, the overall sound is mixed well and sounds crystal clear. Animeigo once again offers the fantastic option of Dialogue only subtitles and Full Subtitles, which will also translate signs and written pages on screen as well as the spoken language. Great job, Animeigo!

Presented in a digipak that holds the four discs, there is a nice image of Nemuri on the cover.

The Chinese Jade film has a feature length commentary from Ric Meyers and Jeff Rovin. It is an entertaining and informative listen and definitely worth your time.

Also offered are production notes, still galleries, and trailers. A booklet is also included with some interesting essays on not only the films themselves, but a historical overview about the time period in which these films are set. 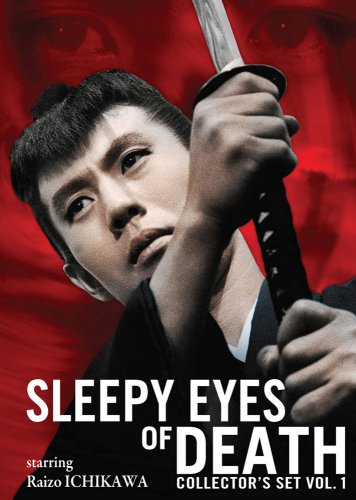