On DVD: Rifftrax: The Best of Rifftrax Shorts Vol. 2

Okay, everyone knows how much I loved Mystery Science Theater 3000. So, it is only natural that Rifftrax: The Best of Rifftrax Shorts Vol. 2 was right up my alley. This collection was recently released on DVD by Legend Films.

Before I get started with the review, I will give a catch up on the whole “riffing” on movies phenomenon.

Back in 1988, there was Mystery Science Theater 3000. In the show, Joel Hodgson, Trace Beaulieu, Frank Conniff, Bill Corbett, and Kevin Murphy would watch terrible B movies and old short films and “riff” or make jokes while shown in silhouette at the bottom of the screen while the film played.

After Joel left the show, Mike Nelson (who had written for the show) joined the cast as an “on screen” personality. Now, flash forward to 2009: there is Cinematic Titanic that has Joel, Frank, Trace and other original writers “riffing” on movies and there is also Riff Trax, which features Mike, Bill and Kevin “riffing” on movies. Even though the gang has divided into smaller groups working on different projects, they are friendly and supportive of each other. Okay, now on to the review.

This collection of shorts features Mike, Bill and Kevin having a fine time “riffing” on these great old educational shorts. Where do they find these gems?

Collected here are One Got Fat, Each Child is Different, Lunchroom Manners, Why Doesn’t Cathy Eat Breakfast?, Petaluma Chicken, Act Your Age, Are You Popular? Good Health Practices, Coffee House Rendevous and Harm Hides at Home.

While all of them will have you rolling with laughter, I do have my favorites from among the bunch.

One Got Fat has just got to be seen to be believed. Somehow, someone thought that bike safety could be taught to children in a film where the children wear some of this most nightmarish monkey/ape masks ever filmed. Truly, this film could give someone night terrors! The children, in masks, commit various fatal errors and the body count rises as the film delivers its message in the strangest of ways.

Harm Hides At Home is another wonderfully misguided educational film. A woman works as an architect and a school crossing guard. But, when she isn’t designing a skyscraper or helping the kiddos across the street, she is scaring the beejesus out of them by educating them about how their homes and everyday appliances and items could potentially kill them. She dons the cheapest superhero costume this side of the Dollar store and sets forth on her path “saving” the youth of today.

Why Doesn’t Cathy Eat Breakfast? concerns itself with the dietary needs of Cathy as we watch her eerily prepare for a day at school without an adult or guardian anywhere in sight. Talk about a latch key kid…..

Good Health Practices will have you rolling your eyes as the narrator dances around the subject of healthy toilet practices.

Mike and the gang provide constant laughs throughout and their razor sharp wit and charisma with each other is as natural today as when they worked together in years past.

This is a no-brainer. Find this and buy this.

The shorts are presented in their original full frame aspect ratio. These are low budget educational films, so don’t expect any fancy restoration or flaws or deterioration: you know what to expect.

Presented in Dolby Digital 2.0, the dialogue in the films and the voices and jokes from the Riff Trax crew are clear and easily understood.

Presented in a standard amaray case, the artwork is suitable to the material presented.

Unfortunately, there are no bonus features available on this release. 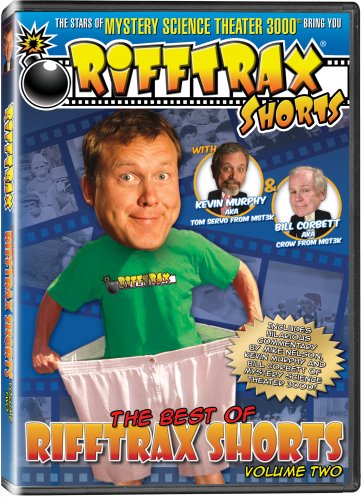