Following the success of March of the Penguins and Planet Earth, audiences are primed and ready for the next big nature documentary hit. Is Arctic Tale what they have been waiting for? Arctic Tale: Blu Ray was recently released by Paramount Home Video

Where March of The Penguins followed the lives of penguins, Arctic Tale follows a polar bear cub named Nanu and his family and a Walrus pup named Seela and his family.

Nanu spends his days with his family learning all the things he needs to grow into a powerful polar bear. He plays in the ice and snow, has moments of mischievousness like any other cub. However, due to the climate changes, the ice around him and the other polar bears is melting, making it much more difficult to find food.

The photography is the real star in Arctic Tale. The photography, both above and below the water’s surface, is breathtakingly beautiful and is captured on the Blu Ray format flawlessly.

This film is solidly aimed toward children, so expect some corny narration and jokes about animals passing gas and whatnot. While the adults watching will groan, kids will probably get a kick out of it.

Arctic Tale is not made with the same style as March of the Penguins and Winged Migration. Those films were not only entertaining, but presented with a sense of subtlety that would appeal to adults and children alike.

But, Arctic Tale is definitely for the kiddos in your life, however adults will enjoy the spectacular photography. Just a word of warning though: the message of global warming and the affects it has on wildlife and animals is communicated very strong and heavy handed throughout the film, so it is in these moments that Arctic Tale could be a bit too melancholy for the young ones, so get ready to have a talk about the subject matter and be prepared to try to uplift some spirits because even though the filmmakers try end on a high note at the end of the film, I would expect some saddened younger viewers at the close. The never-ending global warming agenda takes away from what viewers watch the film for from the beginning: to simply see how these beautiful animals live from day to day.

While I am not saying the message of global warming is not important, because it most definitely is, it just needed to be handled in a much different way. And when you see footage tacked on during the closing credits of a bunch of kids with tips on how to be “green”, it just feels overly forced.

So, Arctic Tale, while not on the level of Planet Earth or Winged Migration, is an enjoyable watch for the young ones in your life, you will enjoy the spectacular photography. It is worth an addition to the Netflix queue at least.

The film is presented in 1080p/AVC MPE-4 encode Blu Ray in anamorphic widescreen. Even though the film is presented in HiDef, the filmmakers filmed in a variety of locations with widely varying levels of light. So, expect some scenes to have a great amount of detail with other having slightly less. Overall, this film looks pretty terrific.

The film is presented in Dolby TrueHD 5.1 Surround. The narration is well mixed with the lush recording of the natural sounds of the animal’s habitat. The soundtrack is mixed well and is not overly loud.

The film is presented in a standard Blu Ray case with a picture of the sweet polar bears.

There are a few bonus features to explore on this release. First up, The Making of Arctic Tale shows the production of the film which spanned several years and the difficult weather conditions filmmakers endured to capture these images.

Polar Bear Spotting is a “how to” find polar bears if you find yourself on an expedition in the arctic.

Finally, the Theatrical Trailer is presented in HD. 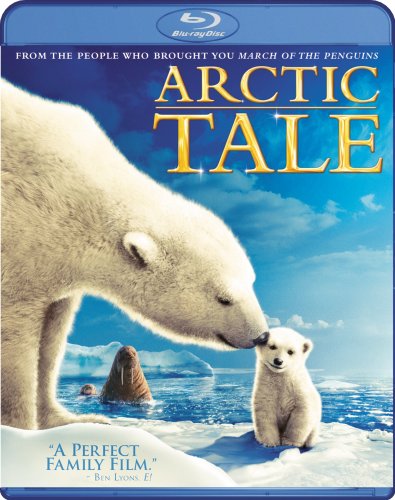