Phillip K. Dick has become Hollywood’s favorite whipping boy. Ever since the classic Blade Runner made so much money his stories have been adapted film left and right with mixed results. The John Woo film Paycheck is based on one of his short stories.

Michael Jennings (Ben Affleck) is an engineer in the near future who makes his living reverse engineering and improving products for competing companies. Since what he does is illegal he agrees to have all memory of the work he has done erased from his mind upon its completion.

An old High School friend who is the head of a multimillion dollar company approaches him about a major job that will take him over three years to complete but will pay him more than he has ever been paid before. After some consideration he agrees to take the job. He moves into an enormous lab and meets another scientist, Rachel Porter (Uma Thurman) who works for the company full time.

The three years fly by and the project is complete. Jennings returns home with no memory of the past three years to find that he has given up rights to his paycheck and that he has sent himself a mysterious envelope with seemingly worthless items. So, he sets out to discover what he has been involved in for the past three years. He finds himself stuck between the authorities and the company that now wants him dead and at the same time he must rediscover a relationship with Porter that has been erased from his mind.

Philip K. Dick has explored this area before in his short stories and novels and many of those have been made into films. Woo mentions at the beginning of his commentary that he doesn’t feel that he is a great director of science fiction films so right away he had 80 % of the sci-fi elements stripped out of the story. This is problem number one since this is a science fiction story. Certainly this story is larger and has more to say than the sci-fi details included within but those higher concepts of morality and “what if…” are barely touched like the top of a pond when we skip a rock across it. We are more interested in seeing what the rock will do rather than the effect the rock has on the water. It’s the same here as we move from a MacGyver moment of having just the right useless item at the right time to get out of a situation to big set pieces and action sequences rather than investigating the higher concepts touched upon between these sequences.

Another problem is the decision to give Affleck’s character a Carey Grant like identity. It works and looks good on screen but it doesn’t mesh with the action elements. They feel out of place with the look of the character. Another thing is Uma’s character has very little to do accept things that don’t make sense. What I mean is she is a scientist, but at the end of the film she’s kicking ass in full Kill Bill style. At least it’s established early on that Affleck’s character has some martial arts experience.

Paycheck made me want to pop Total Recall or Blade Runner into my DVD player and watch those classic looks at Dick’s work and mourn what could have been with Paycheck. On the upside, John Woo is one of the best director’s of action sequences working today and if you hang out to the third act of Paycheck you won’t be disappointed, especially in the motorcycle scene.

Paycheck in my opinion just missed its potential. Some of the action sequences are fun but the story is just too derivative. If you are a collector of Philip K. Dick films or of John Woo films, pick this one up. If you don’t fall into those categories then rent it first.

There’s very little in the way of scratches or grain and colors including blacks and whites look very nice. Detail levels are fairly high too if just a little inconsistent. Some scenes feature a bit more background detail while others are just a little soft in the back. The biggest fault I found is that the skin tones seem a little off. Uma looks a little too dark and been seems to be a little to red faced. Otherwise a very nice widescreen release.

The audio for most of the film is very limited to the front speakers and the center channel. There are a few instances of surround usage that are nice in action scenes but there’s not much in the way of more subtle ambient sound effects. The audio is good enough but it doesn’t live up to the TrueHD format that we’ve come to expect from Paramount releases. The film is available in Dolby Digital audio too.

There are two commentaries available, one from Director John Woo and one from screenwriter Dean Georgaris. Both commentaries are interesting and offer a great deal of insight behind the film. Woo talks concepts and style while Georgaris gets more specific talking about revisions and specific scenes. The two commentaries complement each other perfectly.

There are two featurettes: “Paycheck: Designing the Future” and “Tempting Fate: the Stunts of Paycheck”. The first fairly extensive featurette covers the creation of the film even discussing the original choice of Matt Damon for the lead role. It features interviews with most of the cast and crew. In the beginning it felt a little bit like one of those HBO Specials but then it seemed to go beyond what those specials usually provide. The next featurette is a quite in depth look at the major stunts of the film especially the motorcycle scenes.

There are no new features exclusive to this Blu-Ray. While these bonus features are good enough they aren’t at all new. Shouldn’t there be new features for this new “upgraded” version of the film? 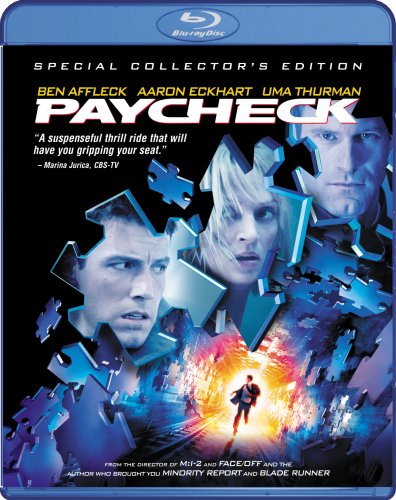