Remember Wayne’s World? Starting out as a skit on Saturday Night Live before becoming a feature film in 1992, it seemed like everyone was walking around in the early nineties saying “”asphinctersayswhat?” Paramount Home Video recently released the film on Blu Ray.

Wayne (Mike Myers) and Garth (Dana Carvey) have a public access show where they discuss important worldly issues like music and which models and actresses are “babalicious”. After the show, they go to see bands, drink and dream of being famous one day.

Until one day a dubious executive (Rob Lowe) discovers the duo and thinks that there brand of particular weirdness might be the “next big thing”. Soon, Wayne and Garth aren’t on public access anymore; they have an honest to goodness cable show.

They go from being virtually unknown to getting attention from attractive women and hanging out with one of their idols: Alice Cooper.

It seems like life can’t get any better. Emily Dickinson said ” Fame is a fickle food – Upon a shifting plate” and never a truer statement has been made. Even though Wayne and Garth care about each other and their friendship is tried and true, can it withstand the trials and tribulations that money and fame can bring?

Wayne’s World, unlike some other Saturday Night Live skits turned into feature film, works and stays entertaining thoughout. This is thanks to the chemistry between Myers and Carvey and the agile direction of Spheeris.

Wow, even though 1992 wasn’t that long ago, this film really feels like a time capsule already. References to video game arcades, the absence of characters “texting ” or making references to social networks like Facebook or MySpace and the clothes will transport you back the days of Ugly Kid Joe and flannel shirts.

If you somehow missed this film, catching up on Blu Ray is a good idea. This is the perfect film to pop in when you have had a stressful day and just need something unapologetically goofy to raise the spirits.

We know that Mike Myers went on to do the tedious Austin Powers films and the dreadful The Love Guru but what happened to Dana Carvey? A quick look at his biography on IMDB reveals nothing after working on The Master of Disguise in 2002.

Dana Carvey is a natural comedic performer, as eveident in this film, and it seems like he should get to showcase that again somewhere else.

I digress. Wayne’s World is a fun addition to the Blu Ray library and aren’t you impressed that I somehow found a way to integrate a Emily Dickinson quote into this review?

The film is presented in anamorphic widescreen in a 1080p/AVC transfer. The transfer, overall, is respectable with vibrant colors and a crisp image. The black levels are impressive and I did not notice any grain or artifacts.

The film is presented in Dolby TrueHD 5.1 Surround. The dialogue is crystal clear and mixed well with the soundtrack.

The film is presented in a standard Blu Ray case with artwork suitable to the film presented.

There are some nice bonus features to explore on this release. First up, a commentary with Penelope Spheeris which is an informative and entertaining listen.

Extreme Close Up is a look back at the production of the film and features new interviews with Mike Myers, Dana Carvey, Rob Lowe, Tia Carrere, Penelope Spheeris and producer Michaels.

Rounding things out is a theatrical trailer. 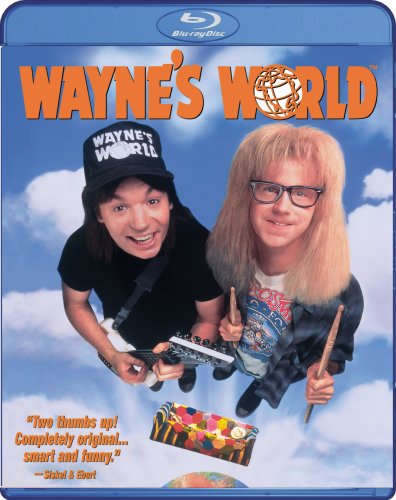