OK, so I’ll admit right away that I’m not a huge fan of vampire stories and movies. Interview with a Vampire was dull to me. I just don’t like the whole idea of the romantic villain theme that is at the core of most vampire stories. Now there are exceptions such as 30 Days of Night, both the graphic novels and the film, and my favorite vampire film From Dusk til’ Dawn. When True Blood started I was interested to give it a look but my hopes weren’t high.

The first episode of True Blood really sort of took me aback because it wasn’t at all what I was expecting. I was hoping for a dark violent drama/horror series. It is that but it’s also really campy and heavily laden with humor. I didn’t expect so much humor and I was disappointed. So, I struggled through a couple of more episodes and then suddenly I found myself hooked on the series. Once I accepted the humor I started really enjoying it and along with the funny came some gore, some frights, some drama, and serialized cliffhangers for each episode which is a weakness of mine.

The story is focused on a waitress in a small Louisiana town. Her name is Sookie (played by Anna Paquin) and she has a special ability. She can hear everyone’s thoughts around her. Often her eve’s dropping is unintentional and tough to control. It turns out though that she can’t see into the thoughts of vampires, which is one of the things that attract her to them. In this alternate reality vampires exist on earth and are known to the world. A drink is synthesized that eases the vampire’s hunger for human blood and many vampires drink it and try to coexist with humans. Some humans are indifferent to the vampires, others are intrigued by them, and still others hate and fear them. The racist element is used quite well in this series to mirror those situations in our own world. Some of the vampires don’t want to drink this horrible tasting fake blood and refuse to do so. They believe they are an evolution of humanity and that it’s their right to eat humans just as humans consume other lower life forms. There’s a lot in this series that reminds me of the stories of racism from the old X-Men comics. That’s not a bad thing because those stories were quite good.

When Sookie begins dating a vampire named Bill she splits the town and her friends. Some of them are in support of her decision but many more are afraid for her. Bill struggles to stay as “human” as he possibly can by drinking the synthesized blood and respecting humanity. His natural instincts to kill and drink blood do come into play throughout the season though.

There are tons of twists and turns in this first season of True Blood that not only involves vampires but a shape shifter and another creature that isn’t completely defined yet. Overall this is a fun romp through a world that isn’t represented in any other way on television. The gothic Louisiana setting is perfect for the darker parts of the story and the campier almost vampire spoofing that happens here and there. Even though there are some poorly executed southern accents here and there overall the cast of True Blood is fantastic. Anna Paquin is the innocent girl next door struggling to find her place in two different worlds, the world of the vampires and the world that she grew up in. Unfortunately Stephen Moyer as Sookie’s vampire boyfriend Bill is the weakest of the cast. It’s obvious that he was picked for the series for his look. Nelsan Ellis as Lafayette is a fan favorite for good reason. He steals every scene that he’s in.

Once the show found its stride it became one of my favorites on TV and now on blu-ray it’s just as much fun if not more so.

This series is presented in 1080p video at 1.78:1 aspect ratio on blu-ray. Overall the image looks good if a little dark. Detail level is high in brighter scenes and just a little bit muddy in darker ones. With that said this blu-ray presentation looks substantially better than the original HD presentation on HBO. Colors look great especially the vivid red blood. Skin tones and environment colors look great too. There is some grain to go along with some of the softer detailed scenes keeping this series from being at the top of the pack.

The DTS HD 5.1 audio is here is some of the best I’ve heard from a television series presented on blu-ray. Action scenes obviously take full advantage of the surround environment but also quieter scenes offer nice immersive ambient sounds through the rear speakers putting you right in the middle of the scene. Dialogue, score, and sound effects are well balanced and clean and the volume levels are consistent too. This is a near perfect audio presentation.

The packaging and Bonus Features

The box set is actually presented in a somewhat outdated style. The five discs come packaged in a thick fold up book, something that hasn’t been used for years. The box does have a nice texture to it making it feel like a nice book.

Now we come to the biggest failing of the box set; the extras. There are some funny things in the set such as fake blood commercials, and commentary on the town’s residents from Lafayette but none of it, I repeat NONE OF IT, is accessible from a bonus features menu. The only way to see these extras, which also include some information on how some of the characters were turned to vampires, is to watch the episodes in the enhanced mode which brings the short bonus features up in picture in picture windows. So, to find all of these extras you literally have to watch the entire season. In the end it’s not worth it because there’s just not much here as far as extras. There are a few funny bits but they aren’t worth trudging through the season a second time after watching it once through with the enhanced mode turned off. If you watched the season originally on HBO maybe you won’t mind watching it for the first time on blu-ray with the enhanced mode turned on. Don’t expect a constant barrage of bonus stuff because you won’t get it.

True Blood really surprised me. I didn’t expect to like it nearly as much as I do. Even if you aren’t into the whole vampire thing True Blood is still worth a look because it’s so much fun. The bonus feature situation here is horrible but the audio and video quality makes this a must own. 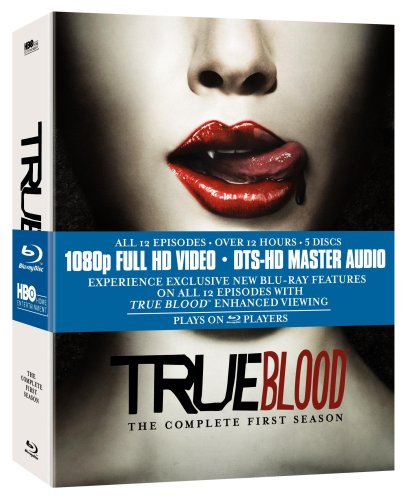