On Blu-Ray: The Curious Case of Benjamin Button

“The years like great black oxen tread the world, And God the herdsman goads them on behind, And I am broken by their passing feet.”

The Curious Case of Benjamin Button is a movie that was tailor made to be released by The Criterion Collection and on Blu Ray.

Benjamin Button begins his life in the most unusual way: he is born as a baby sized old man. His parents, shamed of his unusual appearance abandon him on the steps of the home of Queenie and Tizzy (Taraji P Henson and Mahershalalhashbaz Ali), two people whose hearts are full of love, even if their pockets are nearly empty of money.

It is soon revealed that Benjamin is aging in reverse. Queenie and Tizzy do the best they can with the situation and raise Benjamin to be proud no matter his unusual looks.

Benjamin meets Daisy, a seven year old girl and they bond instantly and seem destined to be soul mates. As Daisy grows older, she is played by Cate Blanchett. The two meet in the “middle” for a short time, age wise, and a passionate love blossoms fully.

Benjamin’s life takes him from New Orleans, to Paris and even Russia and Benjamin’s lives and hearts intersect often and ardently. Benjamin seems to attract extraordinary and unusually open people into his life that enrich his strange existence. Things are good for a time, but both know that time is not on their side and too soon it seems that Daisy starts getting older while Benjamin continues his trajectory toward getting younger.

To me, the story of Benjamin Button is more than just about a love story or the unexpected nature of life, but rather, the fragile nature of time itself and how we have no control over it. Life can be heartbreaking, exciting, and challenging and just when it seems you may get the “hang of it”, it is over.

The performances by Brad Pitt, Cate Blanchett and Taraji P. Henson are remarkable. The direction by David Fincher is amazing. He flawlessly meshes the CGI effects necessary to age Brad Pitt and then make him younger into both a love story and an odd story about an unusual life and man without being distracting.

My only criticism of the film is that at 2 hours and 46 minutes, the pacing is sluggish at times. But, the film overall has an emotional impact that lingers long after you see the film.

If you missed this film in the theater, now is the time to see it. This is more than just a film filled with technical achievements; it is a one of kind cinematic adventure you need to take.

The 1080 p transfer (aspect ratio 1.85:1) is transferred directly from the digital source. This transfer is flawless. There is no noticeable grain or noise, no artifacts and black levels and color is perfect. This is exceptional in every way.

The primary track is a DTS-HD MA 5.1 audio mix and it is wonderful. It is immersive, well separated and crystal clear. This film has a wonderful audio presence that is well presented in this release.

The film is presented in a standard amaray blu ray case with a cardboard slip cover with artwork suitable to the release.

Wow, there is a plethora of bonus features on this release.

On the first disc, there is a commentary track with David Fincher. Fincher keeps the commentary lively, entertaining and informative throughout.

On the second disc, The Curious Birth of Benjamin Button is a 1080i massive documentary about the creation of this film and covers every aspect, from pre-production to the premiere. Clocking in at over 2 hours, it is one of the most comprehensive making of documentaries I have seen included on a DVD release.

There are also 4 photo galleries and 2 trailers. 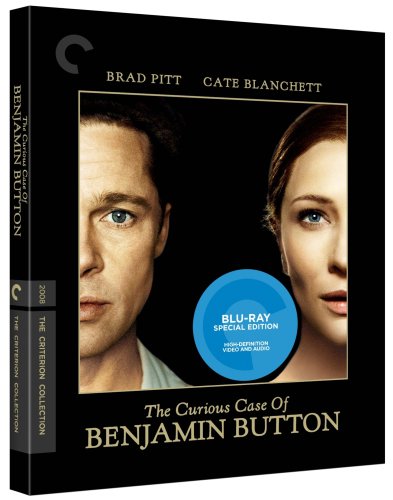