An interesting, almost peculiar movie, The Man Who Shot Liberty Valance is one of John Ford’s masterpieces, and a movie, after a several viewings, I can’t stop thinking about.

The Man Who Shot Liberty Valance starts out with a train pulling into the station at Shinbone, a growing western town around the turn of the century. A man and a woman are escorted off the train by the conductor and met by an old friend. A reporter noticing the deference the conductor showed the couple asks if they are worth a few lines in the Shinbone Star, the local paper. The conductor chastises the reporter “that’s Senator Stoddard and his wife, you could fill your newspaper with them.” The reporter rushes off after Senator Stoddard, Jimmy Stewart, and his wife Hallie, Vera Miles. When he catches up with the Senator the reporter begs for an interview and the Senator acquiesces suggesting their old friend Link, Andy Devine, take Hallie on a ride around town, remarking that a lot has changed.

While the Senator walks to the office of the Shinbone Star for the interview, Link and Hallie take a ride out to the desert to visit an old burned out homestead. As they return to town, the Senator is finishing his interview. The reporter asks why the Senator has come to town. He’s come to town for the funeral of Tom Doniphon, a name that means nothing to the reporter or his editor. The Senator and Hallie barely get to the undertaker’s before the Editor shows up demanding to know the identity of Tom Doniphon. The Editor is insistent and reluctantly the Senator agrees to tell the story of Tom Doniphon. The movie flashes back to when the Senator first arrived in Shinbone. Of course he wasn’t a Senator then, just a wet behind the ears law school graduate by the name of Ranse Stoddard. Before he even gets into town his stagecoach is stopped by a band of masked men. The leader sports a silver trimmed black riding crop that he beats Ranse mercilessly with after Ranse tries to stand up to him. The masked men let the stagecoach go but leave Ranse in the desert to die. They break into Ranse’s baggage and are shocked to find books. The lead masked man almost seems insulted when he examines the books and finds that they are law books and gleefully starts ripping them up before his henchman drag him off.

Luckily Tom Doniphon, John Wayne, comes across Ranse and he hauls him into town on a buckboard. He drops him of at Hallie’s where Hallie and her parents, who run a restaurant, take Ranse in. As soon as Ranse is conscious he’s shocked to learn that everybody knows who the masked man with the silver riding crop is. He doesn’t understand and can’t believe the law is not enough to rein in Liberty Valance, Lee Marvin. Everybody advises him that if he wants to do something about Valance he better get a gun and learn how to use it. Nobody in town is willing to stand up to Liberty. Ranse is convinced that the law is enough, but the title of the film is enough foreshadowing to tell the audience that’s not exactly how things are going to work out.

This is an odd little movie. John Ford who, after making John Wayne a star, is probably most well known for sweeping vistas and breathtaking landscapes employees none in this movie. Besides the opening and closing shots and a couple of scenes at Tom Doniphon’s place everything else in this movie could have and probably was shot on a sound stage. John Ford whose movies usually champion the untamed west here tells a story about building a community and imposing order on chaos. The two leads are ultimately forced to go against their ideals to find resolution, the fierce individualist ends up sacrificing everything for the best of the community and the law and order man ends up picking up a gun and building his career on a lie. There are several levels of irony and contradiction that keep unraveling themselves as the story unfolds. The only uncompromised character is the bad guy, Marvin’s Liberty Valance. Liberty Valance with his henchman Strother Martin and Lee Van Clef make a trio that ooze menace with a tinch of madness. Every minute they are on screen you can’t take your eyes off them, much like it’s hard to turn away from a thunderstorm or a fire that’s out of control. It’s not as if Wayne and Stewart are phoning in their performances either, they are both on top of their game along with the usual faces you see in nearly every Ford movie. What’s so great about The Man Who Shot Liberty Valance though is that it works on all those different levels, you don’t have to wade out into the deep waters to enjoy it, but they are there for exploring if you feel up to it.

The film is presented in widescreen format and is beautiful. Every scene is in deep focus and the amount of detail visible is amazing there is practically no visible grain. The lighting is textbook, moody and dramatic and it all comes through wonderfully. I never noticed any of the usual digital compression gremlins, no moiré or aliasing or for that matter any defects that got transferred from the print. This presentation lives up to the standards set by the other volumes in Paramount’s Centennial Collection.

The audio is presented in the original mono in English, French and Spanish with subtitles in the same. The audio has been cleaned up as well but the improvement is not as dramatic as the improvement in the video. The mix is simple and uncluttered with the simple, typical Ford score never overpowering the dialog. I never noticed any distortion or other problems with the audio.

The two disc DVD edition comes in a standard dual disc Amaray case with a colorized shot from the film of Marvin, Wayne and Stewart. The Amaray case slips into a nice cardboard case that is styled to match the other titles in Paramount’s Centennial Collection. The menus are simple and consistent with the other Centennial Collection volumes. The second disc contains one seven part featurette about the movie. There is one complete commentary with Peter Bogdanovich with bits of archival interviews he conducted with Ford and Stewart. There is also a partial commentary with Dan Ford, John’s grandson with archival audio from John Ford, Jimmy Stewart and Lee Marvin.

This is a must have for anyone who considers themselves a student of cinema. Calling it simply a great western, though it is, is a bit of a disservice, it’s simply one of the best movies ever made. Wayne and Stewart are worth watcing in anything they do, but Marvin’s performance is breathtaking. There is something in this movie for everybody. 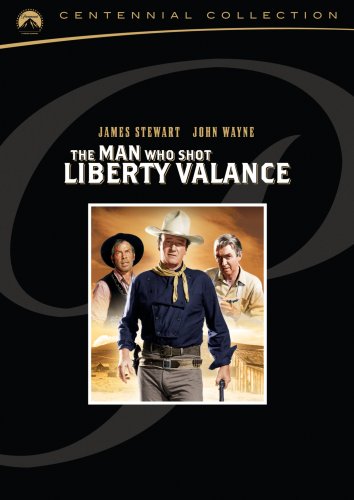