Another must have in Paramount’s Centennial Collection; this time Paramount drags Howard Hawks penultimate film from the archives for our enjoyment.

After a montage of western art used as the backdrop for the opening credits we are greeted with the image of a solitary figure holding a lever action rifle in his hands walking tall down a western street. There’s a badge on his breast and he’s heard there’s a gunslinger in town so he’s going to set some things straight. It’s J.P. Harrah, Robert Mitchum, the Sheriff. Harrah strolls into a saloon and into the back room to confront the gunslinger, Cole Thorton, John Wayne, who is just finishing washing off the dust of the trail. Turns out Harrah and Thorton are old friends, but that doesn’t mean Harrah is going to lower his rifle till he knows where Thorton stands. Turns out Thorton is in town at the behest of one Bart Jason, Ed Asner.

El Dorado is a typical western story, Jason wants to expand but he needs water, the McDonald family has the water and they don’t feel like selling out. Harrah explains that his sympathies lie with the McDonalds and that signing up with Jason means going up against him. Thorton doesn’t feel any need to go up against Harrah and explains to the Sheriff that he’ll just ride on out to Jason’s and turn down his offer. After Thorton tells Jason he won’t be working for him he rides back towards town past the McDonald place. Unluckily for the McDonalds and Thorton the McDonald’s are tipped off that Jason’s hired a new gun and are on the alert. The youngest McDonald boy, who is supposed to be watching out for Thorton. Startled the young man stands up and fires off a shot to warn the rest of the family. Thorton thinking that he’s under attack, spins and shoots the McDonald boy. It’s a gut shot and the boy is certain he’s done for. Before Thorton can do anything besides learn who he is the boy takes his own life.

Thorton takes the boy back to the McDonald place and explains what’s happened. The elder McDonald believes his story but Joey, the fiery tomboyish daughter of McDonald, played by Michele Carey, doesn’t and ambushes Thorton on his way back into town putting a bullet in his back. After getting patched up Thorton leaves town for a job in Sonora. On his way he gets involved with a young man called Mississippi, James Caan, who is just finishing up a two year quest to avenge an old friend. During the brouhaha Thorton learns that McLeod, a dangerous gunslinger, is heading to El Dorado to take the job Thorton turned down, only the job will be much easier now that Harrah has turned into a drunk and is not likely to put up much resistance. Thorton decides to head back to El Dorado and at least warn Harrah of what he’s up against.

Some of the best westerns are actually anti-westerns, deconstructions of the genre. El Dorado is the exact opposite; it’s an old fashioned black hat, white hat story. The first blood drawn and shots fired are by people who are on the same side, but instead of turning into a tragedy with no good guys or bad guys, the decent people do the right thing. That’s not to say the story is simplistic. In a way it’s the weakness of Harrah that sets up the whole main conflict of the film. Typical of a Hawks movie there is a strong theme of professionalism and the importance of loyalty running through the movie. Never send a boy to do a man’s job and never send an amateur to do a professionals job. Even a drunk professional is better than an amateur. In this story Thorton’s on the side of the law but he is a gunslinger, you wonder if Harrah hadn’t been Sheriff would Thorton have taken the job with Jason. Is he doing the right thing because it’s the right thing to do or is it just because it’s what his loyalty to Harrah demands? It might be a bit of a old fashioned story but that doesn’t mean it’s not without depth.

El Dorado is presented in wide screen format. The transfer is superb. There are zero problems with the print, no dirt or blemishes, remarkably little grain even in the night scenes. The colors are beautiful in that wonderful saturated early color movie way. It’s a terrific example of old school movie making. The lighting is always perfect and everything is in deep focus. There is a little bit of moiré here and there but it’s never really an issue and I never noticed any blooming even with the intense reds that are in some scenes. Like the other movies in the Centennial Collection it’s simply beautiful.

This double disc edition comes in a single width Amaray case with a cardboard slip cover. The artwork matches the artwork on the other Centennial Collection releases. It is simple and elegant, black with gold trim and a small iconic image from the film on the front and appropriate copy on the back. The menus are common with the rest of the Collection as well. There is a second disc containing all of the extra features. There are three featurettes included; a making of featurette, one on John Wayne and one on the western art used in the opening credits montage. One defect of the earlier Centennial Collection editions was a lack of commentaries. Paramount has corrected that, this one has two. One by Peter Bogdanovich who is well known filmmaker in his own right, but who also worked with Hawks, and one with Richard Schickel a film historian and critic, Ed Asner, and author Todd McCarthy.

If John Wayne, Robert Mitchum and James Caan all in one film is not enough to interest you, maybe the fact that it’s Howard Hawk’s, the master of any genre, penultimate film may make a difference. Besides its star power and pedigree it’s just a great, beautiful movie as well. 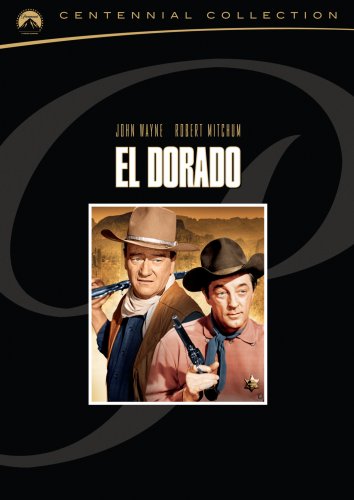