I tend to be more of fan of stand up comedians that are more cerebral, weird and edgy (Sarah Silverman, Zach Galifianakis, Steven Wright) than Dane Cook or Carlos Mencia. So, Jim Gaffigan would fit in there, right? Comedy Central recently released Jim Gaffigan: King Baby on DVD and I gave it a whirl.

Jim Gaffigan does what could be best described as “slacker” humor with jokes mainly about food, laziness and the odd observation about the world around us.

Gaffigan covers the wonders of bacon in deep detail. The food almost holds a magical spell over him apparently. He also has some funny observations about bologna stating “Have you seen the bologna that has the olives in it? Who’s that for? “I like my bologna like a martini. With an olive.” “I’ll have the bologna sandwich – dirty.”

He makes some jokes about Waffle House restaurants, futons and bowling. He makes fun of escalators and vegetarians.

Gaffigan isn’t about political commentary, cutting edge social commentary or edgy humor. In fact, Gaffigan works remarkably clean, so you could pop this into the player if your overly sensitive older parents or other family members are over. This is the one to pick, not Sarah Silverman’s Jesus is Magic.

If you are fan of Gaffigan’s work on Ed, Flight of the Conchords, The Ellen Show or his appearances on Conan O’Brien, Late Night with Carson Daly or Late Night with David Letterman, you are going to enjoy this performance.

If you are looking for something edgy, this isn’t it. But if you are a fan of something quirky and clean, Gaffigan is your man.

It remains to be seen what is going to be the future of standup comedy. Will there be more like Gaffigan, Wright, Patton Oswald, and Brian Posehn? Perhaps more like Dave Chappelle, Chris Rock and Dennis Miller? Or will the scene be overtaken by overrated comics like Dane Cook or “redneck” humor like Larry the Cable Guy and Jeff Foxworthy?

It remains to be seen. But we can make it a stand by supporting releases like this a when we get a chance.

So, this is worth an addition to the Netflix queue, at the very least and for Gaffigan fans, you will add it to the permanent collection.

The show is presented in Anamorphic widescreen. The special looks great with respectable black levels, detail and vibrant colors.

Presented in Dolby Digital 5.1 Surround sound, the sound mix is great. Gaffigan’s voice is loud and clear throughout.

The film is presented in a standard amaray case with an odd rendition of Gaffigan’s pale visage.

There are some nice bonus features to explore on this release. First Up, Pale Force, a fun bunch of animated shorts that Gaffigan made with Conan O’ Brien.

Our Massive Planet has Gaffigan pretending to be a wildlife expert and the Never Aired British Interview that finds Gaffigan goofing around, giving funny fake answers to life questions in this mock interview.

XM/Sirius Interview is a great interview with Gaffigan where he reveals his struggles in the industry and his influences.

Atlanta: Meet and Greet on Demand is a behind the scenes look at a recent tour and features him interacting with fans.

Finally, there are promos for other Gaffigan special and other Comedy Central releases. 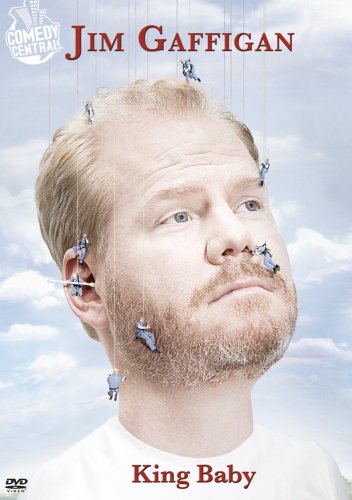