Adam Rifkin is exploring much different territory than in other films he wrote (Mousehunt, Detroit Rock City, Small Soldiers) with the release of Look, recently released on DVD by Anchor Bay.

Look , filmed entirely with surveillance cameras, explores how little privacy our daily word really contains. From security cameras in every store we shop to cameras in our parking lots and workplaces, where are we truly “alone” without “big brother” watching our every move? What is the definition of alone or private in the year 2009?

What starts out as just some random and unrelated video clips slyly turns in to four different stories that are revealed in the surveillance tapes: the ordeal of a geeky office drone, a couple of killers on the loose, a slimy store manager’s hang-ups and the ulterior motives of a Lolita-ish seductress.

Adam Rifkin is able to pull all of this together in the most fascinating way and if it wasn’t for Anchor Bay, the little seen gem might have missed everyone’s radar.

Fyodor Dostoyevsky once said that “Every member of the society spies on the rest, and it is his duty to inform against them. All are slaves and equal in their slavery…” and that statement is true. Our base desire to eavesdrop, to be untrusting of others unless we can watch them without their knowledge for prurient desires or to gain knowledge, imprisons us and in turn, imprisons all those that are being watched.

Many filmmakers are trying to write scripts and make films that capture what it is like for the human race after the influx of technology, such as powerful cameras the size of a pen or now, everyone walking around with cell phones that can capture video and sound at a moment’s notice. Have you ever truly thought about how you are being watched or even taped every moment that you leave your private residence? Even if you are in the rare store without a camera or are riding public transportation, the harmless looking woman in the cardigan sweater next to you could be filming you with her cell phone. While many have attempted to define cinematically what it is like to live in our society now, Rifkin has come as close as any to truly getting the right atmosphere and create the right amount of paranoia that this story needs to feel relevant.

Rifkin also cleverly cast unfamiliar faces at the leads making the film feel even more like true surveillance footage. Would this film feel the same if Jennifer Anniston was in a major role? I think not.

Look is a compelling slice of cinema and you would be missing a great film if you let it slip by.

The film is presented in Anamorphic widescreen. This is supposed to look like surveillance cameras, so expect some fuzz, grain and low level of detail. However, there are a few moments where there are some unexpected bright colors.

Presented in 5.1 Dolby Surround, the dialogue is clear. Now, don’t expect a lush soundtrack, this is supposed to be surveillance footage, so adjust your expectations accordingly.

The film is presented in a standard amaray case.

There is a commentary with director Adam Rifkin, Producer Barry Schuler and Brad Wyman and actor Hayes MacArthur that is an entertaining and informative listen.

A behind the scenes making of featurette can be found with A Look Behind the Scenes. Also offered are alternative and deleted scenes and even Adam Rifkin Outtakes, which are scenes that were botched because the director had to step in to provide proper direction.

Rounding things out is a theatrical trailer, TV Spot and trailers for other releases. 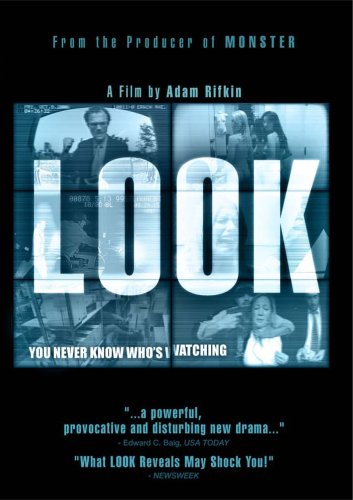