Dustin Hoffman is Last Chance Harvey. He’s barely hanging on to his job as a jingle writer, and after flying to London for his daughter’s wedding he finds himself ostracized from the wedding party. After watching his daughter’s step-father walk her down the aisle and give her away he misses his flight back to New York and as a consequence loses his job. So much for Harvey’s last chance.

After losing everything he heads to the nearest airport bar and starts knocking back Johnny Walker Black, after several shots he notices Kate Walker, Emma Thompson, sitting eating lunch and reading a paperback. Kate has the unthankful job of trying to get people to answer surveys as they arrive at Heathrow and earlier Harvey had brushed off Kate as he deplaned. So after a little lubrication Harvey tries to apologize. Kate brusquely accepts his apology and Harvey, unperturbed, charges on eventually forcing Kate to crack a smile and ultimately Harvey ends up walking Kate to a writing class and wouldn’t you know it a relationship blooms as they stroll the South Bank of the Thames.

What we have here is an old fashioned love story with a few twists on the variables. The plot elements are mostly all there the meet cute, the crisis, the resolution, the twists are in the choice of protagonists. Kate Walker and Harvey Shine. Instead of two twenty somethings or even thirty somethings we have two fifty somethings (or even two well preserved sixty somethings). A lot of time is spent introducing us to the characters. We learn what a wreck Harvey has made of his previous marriage and how his insecurities have managed to isolate him even from his daughter. We see how Kate has become used to being disappointed in love and resigned, almost comfortable, with an inability to being able to connect with somebody else. Which really makes it a trick making it believable that they would fall for one another so completely in a single day. And it works for the most part, the meet cute is not completely believable but the on screen chemistry between Emma and Dustin gradually erodes any doubts you may have had about their initial moments together. The crisis comes across as a little contrived and plot driven but the resolution while formulaic really works with the characters as we have become to know them.

Dustin and Emma are wonderful, but every part is extremely well acted. Eileen Atkins, Kathy Bates, James Brolin all have very small parts but they are all wonderful as well. The subplots involving Harvey’s daughter’s wedding and Kate’s paranoid mother are well put together and support the main plot line perfectly. The direction is great. This is the second film Joel has written and directed. He’s got a great eye and is fluent in the language of film using the camera to augment the emotions emanating from the actors. While this is no classic it is a solid, fresh, and above all entertaining journeyman effort.

The video is presented in wide screen format or on a second disc in full screen format. Some of the dark interior scenes contained a hint of grain in the backgrounds but the subjects were always detailed nicely. The blacks were all crisp and never grayed out. It’s a sharp, clean transfer which you would expect from a new release. The only defects I noticed were a little aliasing around the edges of back lit subjects and some striped objects get a little blurry but none of these ever rose to a level of being distracting and were no more than what you will usually find. Which is a nice because there are a number of very nice compositions.

The audio is presented in Dolby 5.1 Surround Sound with English and Spanish subtitles. The dialog is always clear and well mixed with the wonderful score by Dickon Hinchliffe. It’s organic and complements the movie perfectly.

The DVD is packaged in a standard Amaray DVD case with a cardboard slipcover. The artwork is attractive and make good use of iconic scenes from the movie. The cover artwork and color palette are paralleled with the DVD menus which are well laid out and easy to navigate. The only bonus features are a making of featurette and an audio commentary with, Dustin Hoffman, Emma Thompson, and Joel Hopkins.

After seeing Emma Thompson and Dustin Hoffman share a few scenes in Stranger Than Fiction I was excited to see Last Chance Harvey. The chemistry between the two actors is enough of a reason to watch this movie, the fact that it’s a also a well crafted film is really just icing on the cake. 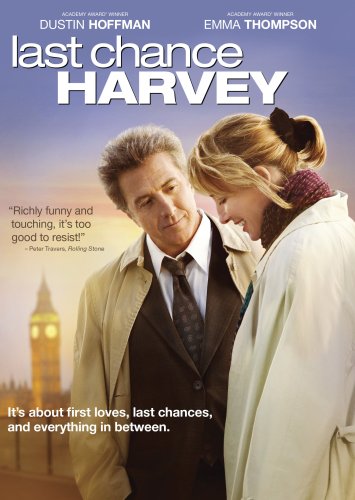