On DVD: The Loyal 47 Ronin (Chushingura)

There have been many different films telling the classic Japanese story of the loyal 47 ronin. I did some research and there have been over 200 films telling this much beloved tale. So, how does Kunio Watanabe (Lady Sanshiro, Ambush at Iga Pass) and Shintaro Katsu (the Zatoichi film series, Hanzo the Razor) do with this story? Animeigo recently released The Loyal 47 Ronin (Chushingura) on DVD.

Lord Asano (Raizo Ichikawa) is a leader that is upstanding, fair and honest and he refuses to bribe his elder Lord Kira (Osamu Takizawa). Lord Kira is the opposite of Lord Asano in every way possible.

The Shogun then tells Asano he must commit seppuku (suicide) because of his offense. While Asano pays the ultimate price for this war of wills, Kira walks away unscathed.

Enter into the story Oishi (Kazuo Hasegawa), who was one of Asano’s loyal men. He begins plotting to exact his revenge on Lord Kira, but quietly, so very quietly. His plan is elaborate and clever and far too complex and enjoyable to spoil in this review. Just know that he won’t be alone; he is going to have lots of muscle with him to put Kira in his place.

Shintaro Katsu appears as the samurai Genzo Akagaki who doesn’t play as big of a role as a fan might hope, so be prepared. While he is great in his part, he is almost unrecognizable if you are only familiar with him because of the Zatoichi films. I was struck by how much he resembled his brother Tomisaburo Wakayama who played Ogami Itto in the Lone Wolf and Cub films.

Fans of Japanese cinema should also notice the appearance of Machiko Kyo as Orui, and she as great in this film as she is in her other films, such as Rashomon, Ugetsu, and The Gates of Hell, just to name a few. She is a beautiful and charismatic actress that is always refreshing on screen.

The Loyal 47 Ronin is everything an epic jedai-geki (period drama) should be. Elaborate costumes and sets, fantastic sets, great performances and a classic story.

This film belongs in your collection and once again, Animeigo is a great friend to all of us who love Japanese cinema.

Presented in widescreen, this is a very respectable transfer. I did not notice any artifacts or grain throughout. The colors are vibrant and the black levels are decent.

The film is presented in the original Mono mix in the original Japanese language. And, as always with Animeigo films, the subtitles are yellow and bold and easily seen. They also continue the great tradition of providing dialogue only subtitles or “full” subtitles that will translate signs and more.

The Loyal 47 Ronin (Chusingura) is presented in a standard amaray case with artwork appropriate to the film presented.

There are a few bonus features to explore on this release. There are program notes, crew biographies, an image gallery and trailers for other Animeigo releases. 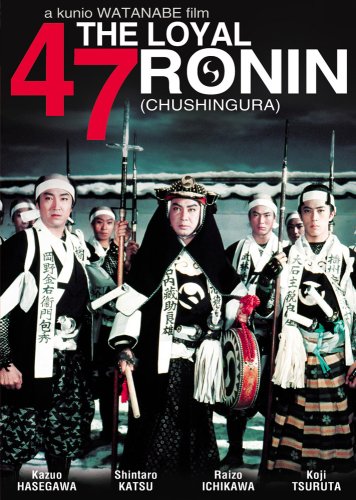