One of America’s favorite and curmudgeons and most erudite country gentleman Ron White’s new show has been released by Comedy Central on DVD. While Ron White is undoubtedly from the South and of the South it would be a mistake to pigeonhole his material as Southern humor. It’s just good old fashioned standup comedy with a bit of Texan twang thrown in.

My only experience of Ron White has been the Blue Collar Comedy Tour albums and while Ron always came off as the more refined of the bunch I was somewhat surprised when the program opened up with Ron standing on the stage with a simple blue curtain backdrop and a small antique stand beside him with a crystal decanter, ashtray and ice bucket and a mic stand in front of him. Ron himself is dressed in a simple black suit sans tie, the picture of elegance and the perfect setting to discuss the pleasures of heated toilet seats and bidets.

After riffing on a little toilet humor, literally, Ron moves on to discuss a bit of legal trouble he encountered in Atlanta when he was caught with a rather smallish amount of marijuana and recounts the opportunity he had to teach one of Atlanta’s finest how to count. From there the material moves on to lawyers and valet attendants and Ron somehow proves again that it is possible to be a lovable jackass; of course it does help when the jackass is the one telling the story. Showcasing the diversity of his material Ron moves on to discuss the appropriateness of the branding of Scotch Guard and the versatility of his couch before moving on to talk about some legal trouble he got into the last time he did some shows in his hometown for explaining that paper mills stink.

He then segues into a story about how he was the first comedian to ever go on a UFO tour and manages to distill the differences between a UFO tour and a USO tour down to one word. Ron spends some time thanking the US military for the job they are doing and while he had a great time doing the USO tour in Germany he had to turn down an offer to do a USO tour in Iraq and uses a donut to explain why you would not find him in Iraq.

For a brief moment Ron gets political pointing out the absurdity of Homeland Securities Heightened States of Awareness color codes that years after it was implemented no one still understands and presents his own simplified more effective Heightened States of Awareness, something simple enough that his own mother could understand. Staying with politics for a moment Ron explains how the country could solve its economic woes by leveraging some beach front property currently owned by the military and reclaim all of the cocaine money the Peruvians tricked us out of and dramatically reduce the size of the border fence that we are trying to build on our Southern border all at the same time.

Following those easy targets he moves on to another stable of stand up and puts his own twist on relationship comedy while discussing his and his wife’s sex life and pointing out the unintentional humor to be found in women’s magazines. Ron finishes of he show on a civic tone pointing out how NASA could save ten million dollars explaining just what the dangers of having women with PMS in space could be.

It’s nearly impossible to come up with a topic that some comedians not built a routine out of, but even when delving into clichés such as air travel and marital relations Ron still manages to put his own unique twist to the material. Ron funny as hell and its fun to watch the decanter slowly empty and the cigar burn out over the course of the show.

The video is presented in wide screen format. It’s bright and crisp; the colors are great with deep rich blacks. There was some slight aliasing but less than normal and I never noticed any other artifacts that would distract from the content. In fact you can always see just how much liquor Ron’s got left in his decanter.

The audio is presented in your choice of Dolby 5.1 Surround Sound or Dolby Stereo. It’s English only with no subtitles though Closed Captioning is available. The sound is simple but effectively mixed. The audio is always distinct and clear.

The DVD comes in an Amaray case with the locking tabs. The artwork consists of a couple of shots of Ron White and his ever present cigar. The copy is bold and simple and raises no false expectations. The menus are attractive and well laid out. The bonus features consist of a couple of culled bits from the show and a couple of tales that Ron tells at a bar in front of a small audience.

Seventy one minutes of comedy gold from Ron White, the perfect way to spend an evening. 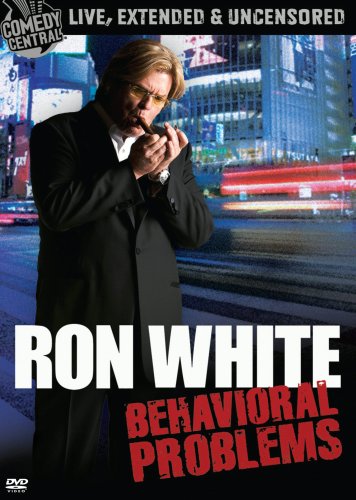