On DVD: Secrets of the Furious Five

Secrets of the Furious Five is a short film based on the characters in the popular animated film Kung Fu Panda. Dreamworks Animated recently released the film on DVD and I love some animated critters, so I gave it a whirl.

Shifu (Dustin Hoffman) has decided that Po (Jack Black) should train a group of youngsters about Kung Fu. These kids have nothing on the rugrats you see on Nanny 911. Po knows that the job is going to be tough, but he believes he is the panda for the job.

Po figures that if he tells of the struggles that the other members of the Furious Five that their stories of challenges met and struggles will inspire the little ones and make his job a bit easier.

What follows is a spirited and humorous “prequel”, allowing fans of the original film to see what the characters were doing many years ago.

We learn that Mantis wasn’t always the calm and well organized being and his poor focus caused some real personal obstacles before he changed.

Viper was born without fangs or venom, a real disadvantage for a snake and her story tells of how she overcame this challenge and learned how to defend herself and her father when an enemy approaches.

Tigress didn’t have an easy childhood. She was an orphan and developed quite the nasty disposition. She was prone to fits of rage and Shifu had do help her learn to calm down and focus.

Monkey wasn’t always the well trained creature that you see today. Monkey was once very hurt and from that, he learned how to hurt others by being short sighted and careless.

It is going to take a lot to get Monkey to see the error of his ways.

Crane was once a janitor and the object of ridicule from his social circle. But, he decided that he had dreams of being more and challenged himself to achieve more, with Shifu’s help.

While the running time for the film is rather brief at just 24 minutes, there is a lot of fun and giggles to be enjoyed in watching this film and if you are a fan of the original, you are going to get a kick out of this film.

The animation and voice work is as solid in this companion film as was in display in the original Kung Fu Panda film. So, this would be a nice addition to the animated film section of your personal collection.

Presented widescreen, this is a decent transfer. I did not notice any artifacts or grain throughout. The colors were vibrant and there was a decent level of detail throughout.

The film is presented in English Dolby Digital 5.1 Surround and 2.0 surround. Thisis very nice sounding. All voices are very clear and easily understood.

Secrets of the Furious Five is presented in a standard amaray case with artwork appropriate to the film presented.

There are some fun bonus features to peruse on this release. Learn to Draw reveals how the storyboard artists and artists teaching the viewer how to draw Po and each member of the Furious Five via sketching the characters one-by-one.

Dumpling Shuffle is a typical shuffle game and Learn the Panda Dance shows you and any kiddos in the house a fun little dance number.

Do You Kung Fu? is a short featurette about Kung Fu movements and shows children demonstrating various Kung Fu moves.

Inside the Chinese Zodiac helps you learn about the Chinese zodiac and its differences from ours.

Rounding things out is Pandamonium Activity Kit accessible by using the DVD drive of your computer.

While aimed toward the little ones, there are some cute stuff here to explore. 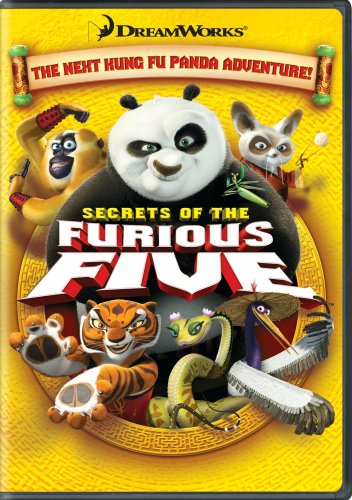