On Blu-Ray: No Country for Old Men 2-Disc Collector’s Edition

So we are finally getting around to covering the now Oscar winning No Country for Old Men. Is it really all it’s cracked up to be? Well, in a word, yes. Let’s get into it.

The story, if told straightforward, is a pretty basic one, but this film is more than just its story. This film does tell a compelling story but even in this film adaptation it remains completely literal and rather than a beginning, middle, and end, this film is really more of a middle. A lot happens with these characters on either side of this story but it’s not important. What’s important is this snapshot of their lives because in this part of their story they find their lives crossing. It’ll be a series of endings for some, and just a pause in the action for others, but for us, the audience, it’s amazingly satisfying.

When this film hit theaters I remember people complaining about the ending, but those people aren’t true movie fans and they most likely don’t have much of an appreciation for literature either. The ending of the film is one of the best I’ve seen in years, easily the best of last year. As I said the film isn’t built around a typical formula of beginning, middle, and end, but the ending of the film is still a finality and the characters in the film do get to tell the stories they were supposed to tell.

Stylistically this film is stunning and subtle all at the same time. There’s no question this is a Coen Brothers film but the style doesn’t weigh down this slowly paced and sure story. The cinematography, especially in the first act is gorgeous. The direction is handled with a sure hand by the Coen brothers and the acting from Javier Bardem, Tommy Lee Jones, and Josh Brolin is top notch. Speaking of the acting, Bardem gets all the attention here but Jones does some of his best work, especially at the end of the film.

No Country for Old Men is a beautifully executed metaphor, an unconventional western, and a crime film. It’s violent, quirky, and intellectual. There were only a few must see films last year and this is definitely one of them. A perfect 10.

The 1080p presentation is easily one of the best video presentations on Blu-Ray to date. Detail is extremely high and the muted color pallet of the source material is nearly perfectly rendered on this Blu-Ray. Black levels are a bit thick but the detail in nighttime scenes remains solid. There is just a bit of grain in these dark scenes though.

There’s no blooming in the bright desert sun and there’s no edginess or compression issues. Again this is a gorgeous transfer, easily demo quality.

This DTS HD 5.1 presentation takes full advantage of the surround sound environment. Action scenes, score, and even subtle atmospheric elements utilize the entire surround stage to make the move deeply immersive from beginning to end. Surround usage can be more subtle during the quite moments which actually gives the movie a realistic atmosphere that works well with the visual reality created by the natural if slightly muted color pallet. With that said there are some segments of the film that are glaringly front heavy making the overall experience feel just a little off balance. The mix of score, dialogue, and effects is always crisp and clean.

The single disc presentation is packaged in a standard slim Blu-Ray amaray case with artwork that better fits the dark tone of the film than the DVD presentation. It’s simple but effective..

On the original release of the film to DVD there are only three featurettes for extras here that all together barely hit 40 minutes. The featurettes do manage to hit the high points of what we’d like to see in featurettes including the making of the film, a look at what the film is really about, and a look at how the Coens work together. These featurettes are available in standard def video on this release too.

The Spike Jonze Q&A is exclusive to this new release of the film on Blu-Ray. Jonze moderates a discussion with the Coen Brothers and some of the crew that worked on the film. This hour long featurette goes deep into the technical aspects of making the film. If you aren’t heavy into film you may not be interested in the level of detail covered here but if you are a fan of the filmmaking process you’ll enjoy this featurette.

There’s an in store appearance with Brolin and Bardem discussing their characters and working with the Coen Brothers. This interview feels less built on sound bites because the actors are given breathing room to really share their thoughts.

The WGA panel discussion is brief and repeats a bit of information that we’ve already heard in other bonus features but this featurette is important due to the participation of Tommy Lee Jones. Up to this point his participation in the bonus features has been minimal at best so it’s good to hear him talk a bit more about his character and the film in general.

I’ve never watched an episode of The Charlie Rose show but I’ve seen tons of clips of it on various DVD’s and Blu-Rays. There’s another segment from his show here featuring Bardem, Brolin, and the Coen Brothers. This featurette is very repetitive to what we’ve already heard in previous suppliments.

Next up are a bevy of additional interviews, a dozen or so, that are very marketing heavy and built on sound bites. So you may be predicting that there’s nothing in these interviews that hasn’t already been covered and you’d be right.

There’s a gag featurette with Josh Brolin that’s unfortunately not as funny as it’s meant to be. At least it only runs around 10 minutes.

The second disc is a standard DVD with a digital copy of the film on it.

There’s a good amount of bonus stuff here but still no commentary and not that much new from the previous release. Where’s Cormack McCarthy. He should have been given an audio commentary along with the Coens. 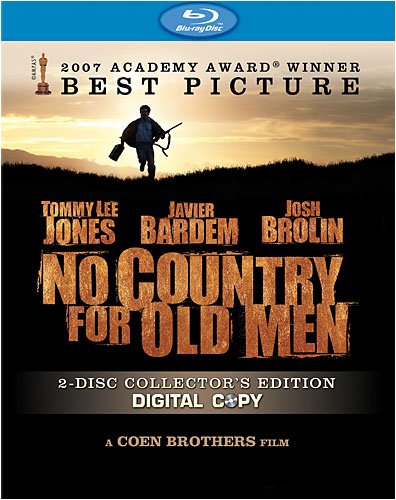