Pinhead may be one of the last modern day horror icons. There was Dracula, Frankenstein, and all of the other Universal era monsters, then there was Michael Myers, Jason Voorhees, Leatherface, and Freddy Kruger taking us into the 80’s. From there a glut of copy cats came on the scene but there wasn’t much innovation as far as the creation of new icons, with the exception of Pinhead. Sure there’s an argument that could be made for the ghost face from Scream but I honestly don’t know that he deserves to be part of this group. Pinhead though, was the last of the true icons and he was definitely the most out there of them all.

What appears to be an innocent little puzzle box actually opens the door to, to what really? Maybe it opens the door to hell, or it could be to another dimension. This place is referred to as hell but that may not be in a literal sense. If it is literally “Hell” then is Pinhead Satan? At any rate splving the box brings forth Pinhead and his twisted minions. By solving the box the holder of it agrees to experience all of the wonders that Pinhead and his crew have to offer. They thrive in pain as pleasure. What they have to offer is torture but the person being tortured may grow to like it, or maybe not. Themes of S&M, fetishism, and sex run rampant through this film and through these creatures. Eroticizing these monsters is truly something unique to horror cinema in the United States.

The film comes from a short story written by Clive Barker as part of his Books of Blood anthology. He adapted the story for the big screen and directed the film. The budget may have been tight but Barker manages to truly create an innovative standout visual style for this film that takes more influence from classic literature than from Jason and Michael. Pinhead himself, the leader of the cenobites, is striking with the grid of long pins across his head and the rest of his body clad in leather. Doug Bradley makes the dialogue and look of Pinhead come to life with a level of icy intimidation that was a requirement to sell the character.

Basically a man who gets taken by the Cenobites manages to escape but not in one piece. He’s incapacitated until the blood of a dead rat starts to rejuvenate him. The rat is killed because his borther and wife are moving into a long vacant family home. Julia, his sister-in-law, begins bringing men to the house and killing them so he can feed on them and rebuild his body. The only problem is that Pinhead is ticked off and he wants the guy back so he finds his way into our world to wreak some havoc.

The 1080p HD presentation is a mixed bag. Some scenes offer a higher level of detail than I’ve ever seen from this film on home video. At the same time some of the brighter colors are blown out and the color pallet overall is washed out. Some of this is purposeful from decisions made when the film was shot but some of it too could have been cleaned up in a restoration from the source material. There’s still a good bit of grain present as well. Even with these complaints the gore effects show more detail than we’ve ever seen before and the image overall is a step above any previous release.

The Audio presentation comes in Dolby TrueHD 5.1 Surround sound and it offers as good a quality audio experience as we’ve ever heard from this film at home. Dialogue, sound effects, and score are all well balanced and mixed but sometimes it sounds a bit muffled. The audio for this film has always sounded this way in every version that was released to home video. This version is the cleanest of them all though.

The single disc release comes packaged in a standard thin amaray case with Pinhead art that feels a little separate from the film. The color pallet just doesn’t match that of the actual film. It still sells the film proper though with Pinhead’s creepy head featured prominently on the cover.

For this Blu-Ray upgrade of Hellraiser Anchor Bay has only added one bonus feature exclusive to the format. That extra is a pop up trivia track that plays during the film. The track does offer some interesting bits of information but it seems like a really minor supplement for the films transition to hi – def.

All of the other bonus features on the disc are brought over from the anniversary edition DVD. Everything is in standard def here too. There’s a very informative audio commentary with the writer/director of the film Clive Barker and star Ashley Lawrence. Barker is one of those writers that is as interesting a speaker as he is a writer so he does a fantastic job of holding your attention throughout the commentary with some behind the scenes stories of the production as well as technical information as far as the filmmaking goes. Lawrence shares some great behind the scenes stories and she discusses her impressions of the production.

There are interviews with Andrew Robinson and Ashley Lawrence. Both of these new interviews offer up some great information from these actors not just on being in the film but about the impact the film has had on their careers and lives. Then there’s a third interview with the composer of the score for the film that also offers up some solid background information. “Under the Skin – Doug Bradley” is an interview with Pinhead himself covering how he became involved in the first film and even some information on his continuing to participate in the franchise even after Clive Barker stopped being a part of it. There’s a behind the scenes documentary that appeared on a previous home video release as well as a group of TV Spots, storyboard and still galleries, and a screenplay. There’s also an interview with Clive Barker that’s slightly redundant to the commentary but it still has a lot to offer.

There’s a BD Live option for downloading additional content but it wasn’t working the last time I checked before writing this review. It’s unfortunate that there’s not more exclusive hi def content but if you don’t own the 20th Anniversary release of this film this Blu-Ray is the one to get.

Even if you do own that version the step up in audio and video makes this release worth a look. Hellraiser is a true classic in the horror film genre. Fans of horror must own this one period. 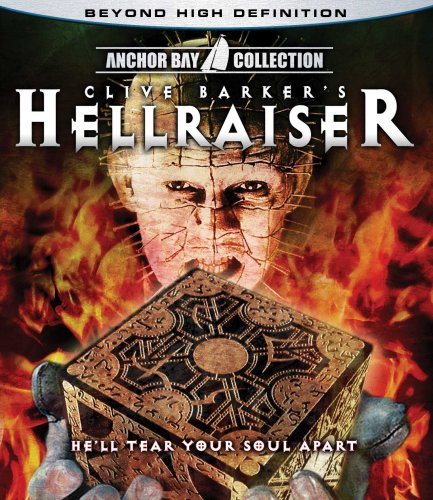