On Blu-Ray: Marley and Me

Okay, I know this is going to be a sappy movie. While I didn’t read the book by John Grogan detailing his life with a destructive Labrador named Marley, both of my parents read the book and told me every detail. So, I know what I was getting myself into. Marley and Me: Three Disc Blu Ray was recently released on DVD by Twentieth Century Fox.

John Grogan, a newspaper writer (Owen Wilson) is madly in love with Jenny (Jennifer Aniston), another newspaper writer. They marry and soon, Jenny is talking babies and nursery rooms. John’s friend, a single womanizer, says to get a puppy. John will have a buddy to hang out with and Jenny will be able to take care of something, which will satisfy the baby craving until they are more ready.

So, John and Jenny decide a Labrador is a good choice and visit a local breeder. As they are sitting with many cuddly pups wiggling for attention, one jumps on Jenny right away. The breeder mentions that one is lower priced than the others and he is on clearance. Both ignore what might be a nicely worded warning and select him. John names him after Bob Marley and Marley the Labrador comes home.

Marley is not like any other dog. While he is loyal and lovable, he is a force of nature that leaves a wake of destruction in his wake that has not been seen before or since. He bumbles through life, making messes, destroying walls, floors, windows, never understanding the error of his ways.

These scenes of Marley destroying everything in his path are some of the funniest in the film. John and Jenny do their best but all Marley is capable of is love and damage.

Eventually, John and Jenny begin their family and Marley helps everyone, between episodes of destruction, with the ups and downs of starting a family and adding children one by one and the changes in life we all experience.

If you have read the book, then you know how the film ends. I am a staunch believer in spoiler free reviews and won’t stop the trend here.

Marley and Me is an entertaining film and I enjoyed it more than I thought I would. However, I was much more a fan of the “dog” parts of the plot than the more standard “new couple faces obstacle starting life” plots. If you took Marley completely out of this story, I wouldn’t enjoy this film.

Although I wouldn’t describe myself as a big Jennifer Aniston fan, she did a good job with her part. And while I much prefer Owen Wilson in the quirky parts he plays in Wes Anderson films (The Royal Tennebaums, Bottle Rocket, The Life Aquatic), he does a lot with the material in this film.

This movie is for animal lovers and in particular dog lovers. And, if you are like me and have grown up around dogs and consider dogs part of your family, you will relate to the story and emotions John Grogan expresses about Marley and the impact he made on his life and the life of his family.

So if the quote by Roger Caras “Dogs are not our whole life, but they make our lives whole” makes sense to you, add this film to your queue. If it doesn’t and dogs just seem like a nuisance, skip this movie but damn, I feel sorry for you.

Presented in Anamorphic widescreen, the film looks great in high definition. The colors are vibrant and the black levels are highly respectable. There is a decent level of detail as well.

The film is presented in 5.1 DTS HD Master audio. The dialogue is crystal clear throughout and mixed well with the lively soundtrack. The bass isn’t booming, but it wouldn’t suit this film. I noticed nice usage of the rear speakers with a pleasant mix of ambient sounds throughout.

Marley and Me: Three Disc Blu Ray is presented a standard Blu Ray amaray case with an uber cute image of Marley as a pup on the cover. The three discs are: Blu Ray edition, a bonus digital copy and a standard DVD of the film presented.

Some nice bonus features await you on this release. Finding Marley explores the process of finding the dogs that portray Marley at different ages throughout the film. Breaking the Golden Rule and On Set with Marley: Dog of all Trades explore the challenges and joys of working with animals on a film and Marley is “interviewed” about his experience on the film.

There is a short featurette about Animal Adoption as well as the comically named featurette When Not to Pee.

A Gag Reel is offered as well as a Dog Training Trivia Track. There are also 19 Deleted Scenes with Optional Director’s Commentary available.

While these are entertaining albeit a bit contrived and focused on the younger viewers, I found myself missing a director’s commentary or a featurette about the real John Grogan and the real Marley. 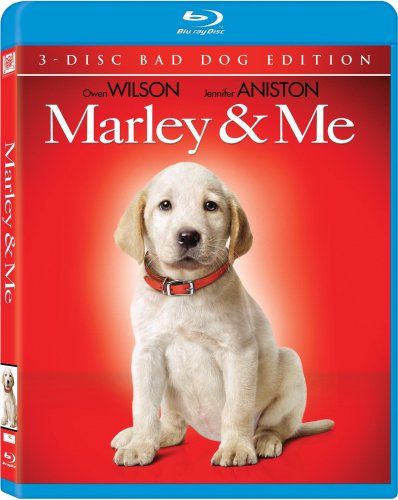