When I saw the trailers for this film, I leaned over to my friend and said “Meryl Streep and Philip Seymour Hoffman hatefully ripping each other apart AND they are doing it in a church? Count me in!”.Well, I missed it in the theater so I was happy when Doubt: Blu Ray, released by Walt Disney Home Entertainment arrived in my mailbox.

The year is 1964 and it is the fall of the year in Bronx, NY. As the cool wind blows the fall leaves across the sidewalk, an even colder wind blows down the hallways and classrooms of Saint Nicholas School: her name is Sister Aloysius (Meryl Streep). Just the whisper of her name or the threat of sitting in her office turns students into organic sacks of fear.

She lives by the motto “Every easy choice today will have its consequences tomorrow”. She views everything and everyone with a raised eyebrow and a heart full of suspicion.

Although Sister James (Amy Adams) has to respect Sister Aloysius, she doesn’t live by the same coda. Her heart is full of hope and love but she has a critical fault: she is far too impressionable and her will is not strong.

Enter into the picture the new priest, Father Flynn (Philip Seymour Hoffman). Father Flynn has a glint in his eye and a smile and a laugh for everyone. Sister James takes to Father Flynn, but the steely gaze of Sister Aloysius has landed upon Flynn in the frostiest of ways. She is soon asking her fellow sisters to keep an eye out for worrisome behavior on the party of Father Flynn.

Father Flynn has seemingly developed an innocent relationship with a young African American altar boy Donald Miller (Joseph Foster). He takes a special interest in him after Donald expresses an interest in becoming a priest after being particularly moved by one of Father Flynn’s sermons.

However, one day Sister James witnesses Father Flynn slip an undershirt into Donald’s locker. When asked by the inquisitor Sister Aloysius, she tells them of what she witnessed.

This conversation sets the stage for a showdown that shakes everyone and everything in its path shaken to the core.

Doubt is not a movie made to be eye candy. This film is about sharp dialogue, an emotionally challenging plot and superb acting.

This is an “actors” movie and the leads bring their “A” game in every single frame. The performances by Streep, Hoffman and Adams are absolutely spectacular and all of them deserved the Oscar nominations they received.

Also, the performance by Viola Davis as Donald’s mother is a revelation. She holds her own and raises the bar in the film, in particular one scene with Streep where she reveals a surprising perspective on the situation. That scene will be one you will be talking about after the credits roll.

I just can’t recommend this film enough. Doubt is a taunt and challenging film that gets you thinking and showcases the best actors working today performing at the top of their craft. Buy it or at least put it in the Netflix queue now.

Presented in Anamorphic widescreen 1080p/MPEG 4 transfer, the film looks great in high definition. The colors are vibrant and the black levels are respectable. A nice level of detail is present throughout.

The film is presented in 5.1 DTS HD Master audio. The dialogue is crystal clear and vibrantly mixed throughout. You can hear the leaves scrapping the sidewalk surprising well.

Writer and Director John Patrick Shanley provides a audio commentary. He provides an insightful look at the production of the film and details the lengthy rehearsal process utilized to get this film into what we see as the final product.

The Cast of Doubt has the cast sitting down for a discussion of the film and From Stage To Screen is a look at how Shanley brought is highly praised play to the big screen.

Scoring Doubt finds composer Howard Shore discussing his musical influences and how he brought those to the score he wrote for the film.

Sisters of Charity is a featurette where a group of real life nuns discuss their lives and how it has changed since the Vatican council demanded them to modernize in 1962.

Rounding things out are some theatrical trailers for other releases. 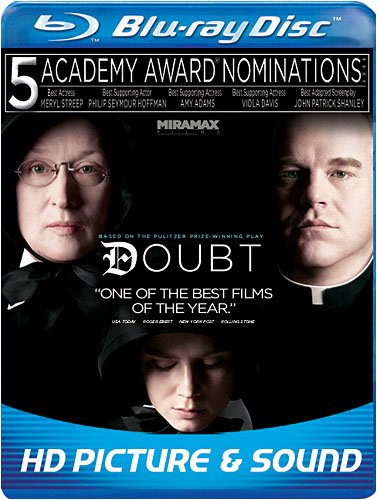