South Park is one of those series that was just too edgy twelve years ago to last. Well twelve years later it’s still going, to the shock of its creators Matt Stone and Trey Parker. The challenge for them is to maintain a steady level of edginess, pop culture relevance, and timeliness that they started the show with.

The short answer is, the show still remains edgy, it’s still timely, and it’s still funny. The shows pop culture relevance may have dimmed just a little due to its age but on occasion throughout the last twelve years the show ahs found its way back into mainstream media here and there. A perfect example is the opening episode of this season where Cartman finds that he has been infected with the HIV virus during his tonsil removal.

The thing that makes this series so fantastic is that the creators combine expected low brow humor with even funnier social commentary. Basically these shows are message driven. They’re like after school specials for the twisted set. Really though, these shows do require a small amount of thoughtfulness to see everything that’s on offer in each episode.

We’ve talked about this before but it deserves repeating: part of what makes this show able to be so timely is the way it’s produced. Typically each episode is produced within a week allowing Matt and Trey to write about whatever happens to be hot in the news at that time. There’s even an episode that aired with Obama as the president the day after the election.

South Park can be a challenging view for the faint of heart but if you stick it out there’s great fun to be had. There are 14 episodes here and they are all extremely entertaining. Maybe two of the episodes are of a lower quality compared to the other twelve but even those episodes brought a smile to my face. No show on TV is as “of the moment” than Sotuh Park, even all these years later. With little exception this show remains just as entertaining and relevant as it always was. If there’s a complaint it’s that there’s not an episode that made as much of an impact on pop culture as “respect my authoriti!”

The look of this series is as basic as it gets. The question is does this series even need to be in HD? Well the answer is yes because it looks much better than previous releases of the series. Oddly the season is presented in 1080i rather than the near standard 1080p. With that in mind colors are extremely crisp and detail level is top notch. Contrast is as good as it gets and black levels are solid. There’s just a little bit of “edginess” in a few spots and in a few other spots there’s some motion blur but overall this season looks outstanding in HD.

This season of South Park is presented in Dolby TrueHD 5.1 audio. This lossless audio format seems wasted on a series that was recorded as basically as the visuals were rendered but the presentation actually makes some use of the surround environment. Music, dialogue, and sound effects are clean and well balanced and on some occasions the rear speakers actually get some use. Overall the sound quality is probably better here than when the season was broadcast.

The packaging for this release features the same less is more sort of art that the other eleven seasons utilize. The difference here is that the packaging is more typical Blu-Ray so it’s slim and space saving.
The expected mini commentaries that Matt and Trey have been doing from the beginning are back for this release. Basically the two creators sit down for four or five minutes of each episode of the series and comment on that episode discussing how they came up with the ideas and cracking jokes.

The Making of Major Boobage is a refreshing extra for a South Park release. This is an actual featurette that goes behind the scenes and really shows what went into getting this episode made. Six Days to south Park si something I’ve wanted to see for years: a behind the scenes look at the creation of an episode. Unfortunately there’s not a lot of time spent with the creators as they go through their process in that week. The unfinished work shown as the week progresses is still interesting though. Behind the scenes: About Last Night is actually more of what I wanted from the previous featurette. This episode couldn’t be complete until the election was over, and the election happened the day before the episode was to air! So this featurette shows a bit of what happened after the election and the team had to scramble to get the episode finished.

Finally there’s a download code for a digital copy of teh entire twelfth season. Oddly this download isn’t available for iPods. I actually think this is pretty funny. Screw Apple and their grip on digital content.
Up to now there hasn’t been that much in the way of bonus features on South Park releases so even as short as the featurettes are they are really appreciated. 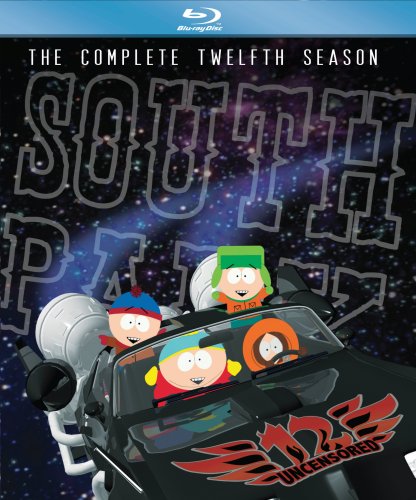