I am long time fan of Mike Leigh’s films, with Secrets and Lies being my favorite. So, anytime this man puts out a film, I am either right there in the theater, or popping it into the DVD player. Happy Go Lucky was recently released on DVD by Miramax.

Happy Go Lucky introduces us to Poppy (Sally Hawkins), a schoolteacher that has one of the most upbeat and positive outlooks on life you are likely to ever experience, either cinematically or in so called “real life”.

Nothing gets her down. Her clothes are just as bright as her smile and her eyes. Even when her beloved bike gets stolen off the street, she is just disappointed she didn’t get to say “goodbye” to it and gets on the bus to go home.

She looks forward to each day and takes the good and the bad equally with a wink and a smile. She enjoys her friends, her job and her life in general.

Until one day, she meets a challenge. She wants to learn to drive a car and hires an instructor. The challenge comes in the form of Scott (Eddie Marsan), a man who is the polar opposite of Poppy in every conceivable way possible.

As Poppy is sugary, Scott is sour and doesn’t take to her light take on life or driving and strives to change her attitude. Poppy is up to the challenge and sets out to change Scott too.

Not a lot happens in Happy Go Lucky and that’s the point. We just see how Poppy sets about her day and what happens to the character during this time and place.

In my opinion, the film is just a look on how an optimist, in this case, Poppy, greets what could happen to any of us during our daily lives.

Being more a “realist” myself, I am fascinated by the perpetually enthused and positive. While I am not a pessimist, I know I am not Poppy.

I found myself smiling and chuckling throughout the film. This is not a “gut busting” film, rather a sweet observation of the type of person you see smiling during a rainstorm, even though they forgot their umbrella.

There have been many positive reviews for Sally Hawkins’s performance as Poppy and they are all well deserved. She has received lots of nominations for this performance. She is remarkable in every scene in the film.

While this is different thematically than other Mike Leigh films, if you are a fan of his films, you are going to enjoy this one. Also, if you aren’t familiar with his work, this will have you adding other Leigh films to your DVD queue.

So, if you have had a terrible day, this is going to put you right. If you are so sour that this film can’t raise your spirits, no one can save you.

Presented in Anamorphic widescreen, the transfer is respectable. The colors are vibrant yet natural and the black levels look suitably dense. I did not notice any instances of grain or artifacts.

The film is presented in Dolby Digital 5.1. The dialogue is crystal clear throughout and mixed well with the soundtrack. The bass isn’t booming, but it wouldn’t suit this film. I noticed nice usage of the rear speakers.

Some nice bonus features await your discovery on this release. First up, a commentary with Mike Leigh is offered and gives some fascinating insight in the film and the character of Poppy.

Behind the Wheel of Happy Go Lucky is a look at the driving sequences in the film and the challenge of filming many scenes in the car.

Happy In Character is a in depth interview with Sally Hawkins about bringing the perpetually cheerful Poppy to the big screen.

Rounding things out are some trailers for other Miramax film releases. 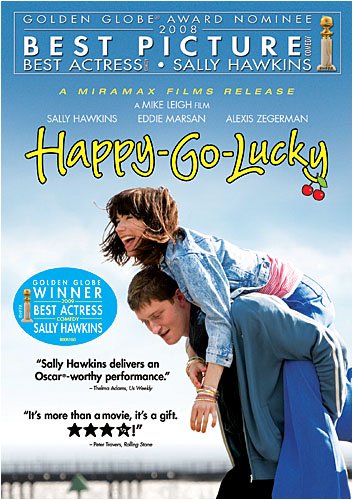