On Blu-Ray: The Kite Runner

The Kite Runner written by Khaled Hosseini is a highly praised novel that had people talking. So, is this an example of the movie is equally as good as or better than the book? The Kite Runner is finally released on Blu Ray by Dreamworks.

Set in 1970’s Afghanistan, The Kite Runner tells the story of the friendship between a young Pushton boy Amir (Zekeria Ebrahimi) and Hassan (Ahmad Khan Mahmoodzada). Even though Amir’s family is well off and Hassan is the son of Amir’s family’s servant, the two are not bogged down in judging one another based on the economic status of their family, they just like each other, love The Magnificent Seven and kite running.

What is kite running, you ask? The sport is popular in Afghanistan, India, Korea, Guyana and India. The kites are standard single line flat kites. However, the kites are made with strong and abrasive lines and the kite flyers are highly skilled, knowing how to utilize the wind and string tension in order to get the kite to fly aggressively toward another kite, wrapping the string around and “cutting” or “capturing” the other kite out of the sky.

Watching these matches are exhilarating and fascinating. I found it refreshing to get a small glimpse into the culture of Afghanistan and a view different than what we are all seeing on the news daily.

However, the happy and carefree days of Amir and Hassan are changed forever one day when a tragic event changes them and their friendship forever. The story follows what happens many years later to find Amir, now married and a successful writer, being summoned back to Afghanistan by a family friend to face the terrible incident in his past and to hopefully, find redemption.

The book was filled with so much information and rich descriptions of Afghanistan culture and life, it would be hard to capture it all in a two hour film. Also, the complex emotions of all of the main characters would be hard to portray as well. The director had almost too much rich material to draw from to try to squeeze it all in comfortable running time.

I think many who read the book were disappointed. I enjoyed the film but see its faults. However, I still strongly encourage you to seek out the book and read it for a much deeper and fulfilling understanding of the story of Amir and Hassan.

The two lead actors, Zekeria Ebrahimi and Ahmad Khan Mahmoodzada, are turn in mature and solid performances. The cinematography is breathtaking.

While The Kite Runner isn’t a perfect adaptation of the original source material, there is a lot here to enjoy and you would be doing yourself a disservice to not take this trip to a far away country and witness the story of Hassan and Amir.

The movie is presented in 1080p Anamorphic widescreen. The level of detail is strong and black levels are respectable. The color palette is respectfully preserved. The “kite running” sequences are especially nice looking in this release.

Presented in Dolby Digital TruHD, the dialogue is crystal clear and mixed well. The bass mix is respectable and there is nice usage of the rear speakers. The sound is immersive and lively. Alberto Iglesias’s award winning score sounds wonderful.

Presented in a standard Blu Ray amaray case, the image of the cover of Hassan and Amir is suitable understated.

Some nice bonus features await your perusal in this release. However, they are the same as in the original 2008 release. A commentary with director Marc Forster, novelist Khaled Hosseini and screenwriter David Benioff is an intriguing listen. Instead of just verbally describing what you are seeing or telling of technical details of capturing on film the story, the two spend some time discussing Khaled’s childhood in Afghanistan and encourage him to give details about the area and why it was difficult to return to Afghanistan to film this story and having to choose to film in rural Western China.

Rounding things out is an HD transfer of the original theatrical trailer.

While what is offered is entertaining, there isn’t anything different here than in the standard release of the film that was offered in 2008.

So, make your own judgment call on whether you want to save your money on splurging on the Blu Ray version of the film. The Blu Ray transfer is respectable, but the bonus features are not “special” on this release. 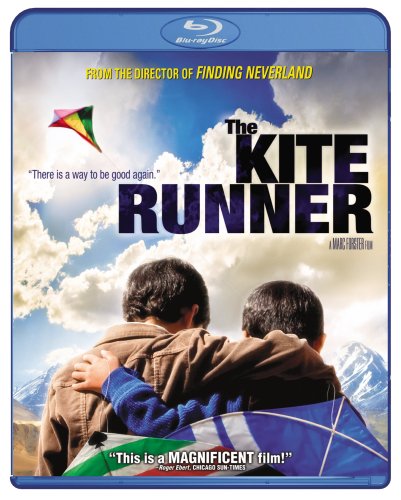