This is the seventh installment of Paramount’s Centennial Collection. Another beautifully restored and presented treasure from the Paramount catalog. The previous selections featured the glorious and glamorous, Audrey Hepburn, William Holden, Cary Grant, Fred Astaire, Grace Kelly and Humphrey Bogart now comes The Odd Couple, the Neil Simon masterpiece starring one of the Hollywood’s greatest, but far from graceful or beautiful, acting team, Walter Matthau and Jack Lemmon.

The movie opens with a despondent Felix Ungar, played by the incomparable Jack Lemmon, walking through New York City, he checks into a flop house and neatly places his personal things into an envelope addressed to his wife and kids and tries to kill himself. Things don’t quite go as planned and Felix returns to his trek through the lively New York City streets. Meanwhile a poker game is by fits and starts taking place in a large but trashed apartment. The guys are worried because Felix is late, and Felix is never late. The host Oscar Madison, Walter Matthau in one of his greatest performances, emerges from the kitchen with brown and green sandwiches which only the hungriest of his guests is brave enough to chance. The phone rings and the guys are informed that Felix is missing. His marriage is on the rocks, he didn’t show up for work this morning and nobody knows where he is.

We learn from the guys reaction that Felix is a bit high strung and they are worried, rightly, that Felix may try to do something extreme. Before they can figure out whether to go searching for him or do something else Felix shows up at the door. After Felix reassures everybody that he’s not going to try to kill himself, at least not tonight, the game busts up after it’s decided that Felix will stay the night at Oscar’s where Oscar can keep an eye on him. The one night turns into however long it takes for Felix to get back on his feet and adjust to single life.

While Felix’s marriage has just fell apart and he has to learn to live on his own again. Oscar appears to have adjusted to his divorce but in reality he’s just as far off the deep end as Felix. He’s dangerously late on his alimony and child support payments and he’s basically just living day to day. In truth he’s just as out of his element as Felix he’s just hiding it better. For a while the two of them living together works out well. Felix gets Oscars household in order, the apartment cleaned up and his finances in order and Oscar keeps Felix from turning into a hermit, but after a while their differences just become too great and everything blows up.

The screenplay based on the hit play by Neil Simon is a masterpiece of hilarity. The humor comes from the extremes of the characters but the performances by Matthau and Lemmon keep Felix and Oscar sympathetic even when they are at their most neurotic. Lemmon and Matthau’s performances are so iconic it’s easy to overlook the contributions of the other actors but the co-stars John Fielder, Herbert Edelman, David Sheiner, Larry Haines, Monica Evans and Carole Shelly all turn in masterful performances. Nearly every scene had me laughing out loud. This is not only a heartwarming movie about two middle aged men adjusting to new circumstances but it’s one of the funniest movies ever made. I would call this a perfect movie. Howard Hawks defined a good movie as “three good scenes and no bad ones”, Every scene in The Odd Couple is at least a good scene most are great. Not only are all the scenes good or great they are all integral, there is no flab in the 105 minutes of running time.

The video is presented in the widescreen format. It is on par with all of the other Centennial Collection offerings, which is uniformly excellent. The transfer is done from a clean and fresh print with no noticeable blemishes or scratches and very little grain. The color is good, it does have that Technicolor tint but the skin tones are natural and the blacks are nice and dark like they should be. The images are always sharp with a tight focus on the principles and often on quite a bit of the background as well. I never really noticed any of the usual compression artifacts like moiré, aliasing or blooming.

The audio is presented in Dolby Digital 5.1 Surround Sound in English and in mono in French and Spanish. There are subtitles in French, Spanish and English. This is not a movie you pop in to show off your new Surround Sound receiver but there is nothing wrong with it. The mix is excellent with all of the dialog easily heard and the beautiful Hefti score shining through. There is never any need to jockey the volume up or down when the scenes change and I never noticed any no distortion or any other artifacts that would interfere with your enjoyment of the movie.

This two DVD set is packaged in a standard DVD case with a cardboard slipcase. The packaging matches the other entries in the Centennial Collection. They look quite handsome lined up on the shelf. The artwork is simple and elegant using iconic images from the film. Like all of the Centennial Collection editions there are a number of extras, including a commentary with the sons of Jack and Walter. The second disc featurettes go into the Matthau and Lemmon team, how the Neil Simon hit play became a classic movie, memories from the set from some of the surviving cast as well as more information about the production.

Simply one of America’s greatest comedies, this movie belongs in every movie lover’s collection and this is the edition you want 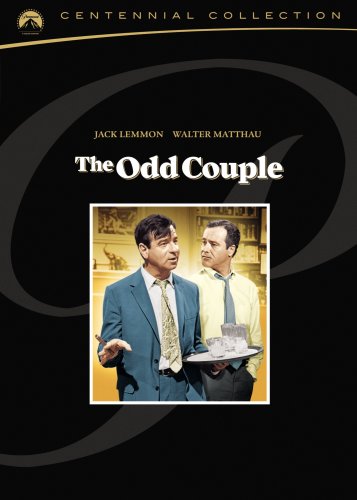