On DVD: Paramount Centennial Collection: To Catch a Thief

This is the sixth installment of Paramount’s Centennial Collection. Another masterpiece hauled from the Paramount vaults and re-mastered and re-released. This time it’s the Hitchcock classic To Catch a Thief. The Cary Grant and Grace Kelly caper slash love story set in the French Riviera.

John Robie, Cary Grant, a retired jewel thief, has a problem. After a string of jewel thefts that are remarkable in their similarity to some of his old work. No one believes that he is still retired. Not the police, who want to revoke the parole he earned for heroics performed as a member of the resistance in the Second World War, and throw him in jail. And not his old buddies from the underground who think he’s freelancing now and not spreading the wealth around like in the old days, who want to kill him. Since no one is going to find out who the real crook is when they are convinced that he is the culprit he comes to the realization that he is the only one left to look for the actual thief. This is a very dangerous course because to get close to the thief he has to get close to the thief’s targets. Close enough to make him look extremely guilty, to the police and his old comrades, unless he catches the thief red handed.

Using the one contact from the old days that he thinks he can trust he sets up a meeting with someone who has been snooping around asking questions about people with a lot of jewelry. It turns out the snoop is an agent of Lloyds of London who has been forced to make some large payouts and has been poking around a bit on his own. Robie and the insurance agent form an uneasy alliance and Robie learns from the insurance agent the identity of the next likely target.

Robie poses as a rich lumber magnate from the Pacific Northwest and manages to ingratiate himself with the Stevens, one of the likely next targets of the thief. The Stevens are mother and daughter, Jessie and Frances, and Robie, being Cary Grant, of course charms the both of them. The movie starts out as a caper movie but at this point a love story starts to weave in and out of the narrative as Francie pursues Robie with the continuing jewel thefts serving to heighten the tension of both story arcs. While this is comparatively light fare for Hitchcock he proves masterful in managing the suspense and tension leavening it where appropriate with humor.

While Cary Grant and Grace Kelly are quite easy on the eyes the French Riviera is absolutely stunning. It practically becomes a character in the movie. I suppose you could tell this story in New York City or Paris, but it’s hard to imagine it anywhere else but the south of France. There are several helicopter shots that are absolutely stunning even now; it’s hard to imagine the impact they would have had in 1955 in a dark theatre. Kelly’s sexuality and the risqué dialog must have had more impact in 1955 as well. It’s a testament to Hitchcock’s storytelling that they the heat is still there after our senses have been dulled by todays hyper sexualized fare. While the love story competes with the caper story arc this is still a Hitchcock movie with his signature red herrings and plot twists.

The video is presented in the widescreen format. As I mentioned previously the French Riviera looks absolutely gorgeous in the exterior shots even in the close ups when the principles are in focus and the background is not yours eyes are still pulled to it. When the focus is deep as in the helicopter shots I find myself distracted from the main action and just let my eyes roam. The only problems with the video are because of a wardrobe choice. Early in the film Robie wears a shirt with tight stripes which generate a moiré pattern in every shot they are in. Other than that I never noticed any compression artifacts. The transfer is done from a clean and fresh print with no noticeable blemishes or scratches and very little grain. Besides a bit of that Technicolor tint the color is excellent.

The audio is presented in Dolby Digital Stereo in English and in mono in French and Spanish. There are subtitles in French, Spanish and English. The mix is excellent with all of the dialog easily heard. There is never any need to jockey the volume up or down when the scenes change and I never noticed any no distortion or any other artifacts that would interfere with your enjoyment of the movie.

This two DVD set is packaged in a standard DVD case with a cardboard slipcase. The packaging matches the other entries in the Centennial Collection. I think I’m getting addicted to these Centennial Collection editions. I even like the smell of them. The artwork is simple and elegant using iconic images from the film. Like all of the Centennial Collection editions there are a number of extras, including a commentary from Dr. Drew Casper an expert on Hitchcock, this commentary is a treasure trove of information about the movie and Hitchcock. It will take several viewings to glean all of the details it has to offer. The second disc featurettes go into how film censorship worked in the fifties, how the film was made, Hitchcock himself as well as Edith Head, who did the costuming as well as more information about the production.

Hitchcock, Kelly, Grant, that’s really all that needs to be said. If your still not interested throw in the French Riviera and it your still not nibbling then I don’t know what to do with you. 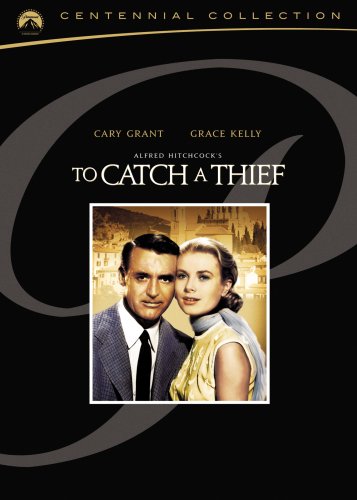