On Blu-Ray: The French Connection

William Friedkin may well be best known for The Exorcist, a fantastic movie and a true classic, but the man has done some other films outside the horror genre that are just as innovative and just as influential as that seminal film. One of those films is The French Connection.

Without The French Connection there might not be modern television series such as The Shield and The Wire. The whole idea of a gritty morally ambiguous at best and morally bankrupt at worst cop that still manages to do the job started with this classic Gene Hackman starring film. Watching this film now might even feel cliché and a little less powerful than it was when it was first released in 1971 because it has been lifted from so much by subsequent films and television series. As viewers we’ve become desensitized too much of the edgier violence and language that seemed so excessive when this film was released. With that in mind though this film is a must own for fans of crime dramas because it’s truly a benchmark in the genre.

Hackman and Roy “Blue Thunder” Sheider star as two New York narcotics detectives who spend their days kicking around small time dealers with little regard for the criminals legal rights. Hackman plays the more grizzled and bitter of the two detectives with Sheider being groomed in his image. Things change for the two of them when they discover that a major drug shipment will be hitting New York. They believe that if they can take take down the French drug lord behind the shipment that this will be the case that makes their careers.

That’s really basically it for the plot. The characters are established rather than evolved through dramatic elements. There’s no realization for Hackman’s character about what a bad guy he is sometimes, there’s only the chase. That chase is rendered in a way that’s so imitated these days on TV in particular that it’s startling. The film si shot in a documentary style making it appear gritty and realistic similar to modern TV such as Homicide: Life on the Streets. The film is fast paced and riveting all the way to the end. Sure some of the action feels common compared to modern film and TV but it’s so well done that it’s like a good meal you’ve had before; you’re always happy to have it again. The film broke the mold when it was released in style and in thematic elements. On top of that the direction from Friedkin is confident and consistent and Hackman and Sheider own their characters in a way that makes the documentary look of the film feel even more legitimate.

The French Connection set the pace for modern cop dramas nearly 40 years ago and even if it hadn’t done that it would still just be a great entertaining film.

OK, this is where things get controversial. The film is presented in full 1080p resolution with retouched color supervised by the director. Overall, the film just looks horrible. Detail level is very poor throughout the film due to a defocusing of the color layer done purposefully by the director in hopes of getting closer to a documentary look for the film. The new colors are described as pastel by Friedkin and his description is dead on. While watching the film you may find yourself wanting to adjust your television especially when you notice the purple hue to skin tones. It’s the most bizarre color retouching I’ve ever seen and overall it’s a complete failure. There is extensive coverage of the color retouching in the bonus features that don’t make the pain of this redo in less. As I said detail is diminished by the out of focus color layer and black levels are crushed. This film doesn’t look like a Blu-Ray presentation at all.

The original mono audio is presented here in three options; DTS-HD, Dolby Digital 2.0, and the original mono track. Dialogue is a bit muddy in places and some sound effects are shrill out of balance with the rest of the film. With that said the score is fairly immersive and the few instances of surround use are subtle rather than heavy and overdone. Considering the source material the presentations aren’t bad with the HD option sounding the best.

The packaging and Bonus Features

The 2 disc Blu-Ray edition is presented in a standard slim Blu-Ray amaray case with cover art that features a retro style which is appropriate for the film.

Fox released this film a a few years ago in DVD special edition and the bonus features here have been brought over from that release. There’s a director’s commentary on the first disc that feels more like descriptive audio for the film rather than an informative commentary that shares background information about the film. Gene Hackman and Roy Sheider each do half a commentary as well. I say half because Hackman appears on the commentary for the first half of the film and Scheider appears on the second half. These commentaries are a bit more informative although they tend to focus on the acting side of the making of the film. This commentary would have been better had Hackman and Scheider been in the room together and had some conversation about the making of the film.

There’s a feature length BBC documentary about the real French Connection case and the production of the film. “Making the Connection: The Untold Stories of The French Connection” is another feature length documentary that focuses on one of the real detectives that the movie was based on. He shares his memories of the original case. Both of these films offer really interesting background on the film and the case that the story was based on. There’s also about 12 minutes of deleted scenes. There’s a brief introduction from the director prior to the deleted scenes playing. The quality is awful and so is the optional commentary.

There’s actually a bevy of all new Blu-Ray exclusive bonus features! More studios should be adding substantial new substantive Blu-Ray exclusive bonus features to get fans behind the format. There’s a brief introduction to the film from the director where he begins trying to sell us on his new color timing. There’s also a trivia track that can be turned on to run during the film. The trivia track focuses on the real case which overlaps with the previously mentioned documentaries but there’s still some good nuggets to be found in the track here and there.

“Anatomy of a Chase” is a brief featurette that follows the director and producer of the film as they revisit locations from the major chase scene of the film and discuss the staging of the chase. These location visits are always fun and here Friedkin finally does something other than just describe the film.

“Friedkin and Grosso Remember the Real French Connection” is a featurette that consists of a conversation between the director of the film and one of the real detectives that the film is based on. It runs less than 20 minutes but it’s interesting to see these two sit and discuss the film and the real case.

“Color Timing The French Connection” is 13 minutes of Friedkin trying to sell fans on his new color changes. He even goes so far as to condescend to those that think the original image looks better. Everyone has a job to do and making color and image decisions are obviously not Friedkin’s. He’s still capable of making a good movie though. Look at Bug from a couple of years ago as an example.

“Cop Jazz: The Music of Don Ellis” is a 10 minute look at the music of the film.”Rogue Cop: The Noir Connection” is a featurette comparing the film to other classic FOX films of the same genre. Finally there’s the very odd addition of D-Box Motion Code. This code can be loaded from the disc onto a PC and will sync D-Box enabled furniture to shake and jostle the furniture to the action scenes of the film.

There’s so much stuff on this disc that the absence of still galleries and trailers is all too obvious. Where are they? Also what about some new interviews with the cast? At any rate there’s a lot of really good bonus material in this collection. Even if you don’t agree with Friedkin’s color changes (believe me you won’t) you do get to see where his mind was when he made them. 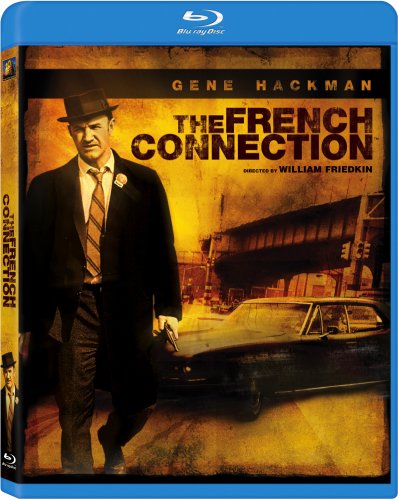