Back when this film came out in 1996, it was the first time film audiences saw the talented Edward Norton. He was the reason I enjoyed this film as anyone who knows me knows that I am not a big fan of Richard Gere. So, how does the film hold up after 13 years? Paramount Home Video recently released the film in a Blu Ray edition.

Primal Fear is based on the novel by William Diehl and stays mostly faithful to the source material. Aaron Stampler (Edward Norton) is caught after leaving the scene of a brutal murder, the murder of Chicago’s Catholic Archbishop Rushman (Stanley Anderson). Stampler does not seem like the murdering type. Baby faced and cursed with a significant stutter, but he is covered in blood and seems to have a story to tell. Enter Martin Vail (Richard Gere), a defense attorney that is a lot of big talk, fancy suits and swagger and seemingly can’t get enough attention from the media. He feels like Stampler is innocent and begins the work of defending him.

There are a lot of obstacles in Vail’s way. He has a tenacious ex cop (Andre Braugher) trying to find a missing choir boy that may have some information, a prosecutor (Laura Linney) that isn’t falling for the story Stampler is telling and has some mixed feelings about Vail because of a failed romance with the egomaniac, and a psychiatrist (Frances McDormand) that is trying to pry open the puzzle that is Stampler’s brain.

Similar to other courtroom drama films, there is a lot of scenes of the prosecutors, defense attorney and judge yelling out the various legal jargon that is expected. Also similar is how these types of films are told: the case is explained, the trial commences and the trial reaches its conclusion.

What makes this film stand out is the striking performance by a young Edward Norton. He owns every frame he is in and has turns in a multi-layered performance full of mystery and emotional complexity in the Stampler character.

And, while I am not a big fan of Gere, he capitalizes on what seems to be his natural arrogance to tap into the mind of the equally arrogant Vail character. It was a good fit for his particular talents.

Laura Linney as the prosecuting attorney and Andre Braugher as the ex-cop again turn in solid performances as expected.

So, if you are a fan of courtroom dramas, this is a must see. This film fires on all pistons and Norton scorches the screen with his performance. Make room on the DVD shelf for this one.

The show is presented in Anamorphic widescreen in 1080p transfer. While the film features moments of extreme clarity and detail, other segments seem a bit flat. The color palette and black levels are decent.

Presented in Dolby Digital TruHD 5.1, the dialogue is crystal clear and mixed well. The bass mix is respectable and there is nice usage of the rear speakers.

The film is presented in a standard Blu Ray amaray case with a picture of Edward Norton and Richard Gere on the cover.

There are some nice bonus features to explore on this release. First up, a commentary with director Gregory Hoblit, Writer Ann Biderman, Producer Hawk Koch, Casting Director Deborah Aquilla and Producer Gary Lucchesi. To me, it seems like this would have been more entertaining if just a few of the above names participated. Instead, it seems everyone has a lot of the same stuff to say and talks over one another a bit.

Primal Fear: The Final Verdict is a new featurette created for this release. All of the cast is here, except for Richard Gere and discuss the making of the film and the buzz around the film upon its release. Primal Fear: Star Witness is a look at Edward Norton and how he got this much coveted part and how it has changed his career. The Psychology of Guilt is a discussion about the legal and forensic aspects of the film with a real life judge and forensic psychologists.

Rounding things out, a trailer for the film is offered. All things considered, a nice assortment of films to compliment this strong court room drama film. 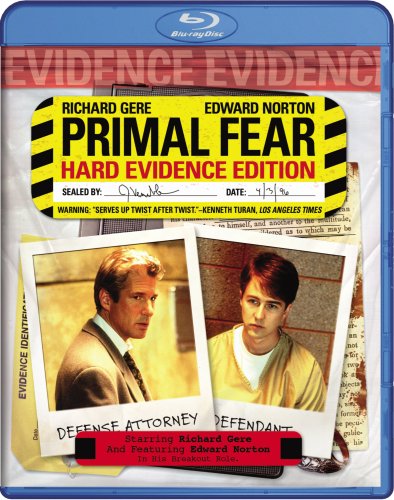