On DVD: Way of War

Cuba Gooding Jr. is a man on a mission. As the sole survivor of a darker than night black ops mission to eliminate the “Ace of Spades” he’s out to discover the truth about the real nature of his mission, I think.

The movie starts out with a press conference at the White House. A distinguished looking member of the administration dressed in black tie is apologizing for ruining every bodies New Year Eve. He then explains that a week ago the administration had received intelligence pinpointing the location of the “Ace of Spades”. Remember the deck of cards the military was using in Iraq with all of Saddam’s top henchmen. I suppose this is what they are referring to and assume that the “Ace of Spades” must then be referring to the big banana, the bogeyman himself, Osama. The black tied official explains to the press that a brave team of three soldiers has acted on this intelligence and that the “Ace of Spades” has been eliminated. Tragically though, the three brave soldiers have also perished.

As the official steps away from the podium he his met by another official. In a secluded hallway official number two informs official number one that “he” has popped up. “He”,Cuba Gooding Jr., is currently on a bus heading to Washington, as the bus arrives he is confronted by two agents who place a tagging device around his ankle and give him an envelope. He explains to the agents that he just wants his box and his cash and then he will disappear. The agents explain that that is not one of the options available to him. There are only two, just walk away and disappear, or open the envelope.

Interleaved with these scenes are two different series of flashbacks. One set of flashbacks takes us back an indeterminate period of time to a seedy DC blues bar where Cuba is doing some cloak and dagger business with another operative. After that business is over he notices the bartender, turns out that she has noticed him as well. A couple of scenes later we see Cuba proposing to her after explaining that he’s not going to be around over the holidays. The other series of flashbacks deal with what Cuba was up to overseas. On Christmas Eve, Cuba was in Northern Pakistan with the other two members of his team. They had just received the intelligence locating the “Ace of Spades” and set out to take care of him once and for all. This series of flashbacks continues all the way through the movie.

Meanwhile back to New Years Eve, Cuba is doing some more cloak and dagger business with a room service waiter, a sheet of plastic, a roll of duct tape and the “how many licks does it take to get to the center of the tootsie roll pop” riddle to track down his box. When he finally does find his box what it contains precludes any possibility of his just walking away. Thanks to a couple of unbelievable coincidences and some plot turns that don’t even make enough sense to be called holes Cuba manages to deliver his message all the way to the top.

This is not a good movie. It suffers from the same problem a lot of low budget action movies, there’s just not enough action. That doesn’t have to be a death blow. A dearth of explosions and gunfights doesn’t automatically equal a bad movie. What’s really unforgivable is that technically this is a decent movie. The acting is generally pretty good. The dialog, if a little overwrought in a few places is not bad, the music is terrific and and I liked the direction for the most part. What kills it is the plot. It doesn’t make any sense. After reading the copy on the cover I was afraid that this might be some kind of truther nonsense and It might be, I don’t know, it’s impossible to tell. After watching it twice I still have no idea who the good guys and the bad guys are and exactly what the point is anyway. In spite of all this the ending sent a bit of chill down my spine at the same time I was thinking “huh?”. If the story had any sense at all this would have been a bit of a b-movie gem.

The video is presented in wide screen format and it looks pretty good. There is some aliasing her and there and at times the image is almost too sharp. The colors are nicely saturated and the skin tones are natural. Beside the bit of aliasing I never noticed any other artifacts or other issues with the video.

The audio is presented in English in Dolby Digital 5.1 and stereo. There are English and Spanish subtitles. The excellent score and music never steps on the dialog and there is no distortion or other problems with the sound that will get in the way of extracting what ever enjoyment there is to be had in this movie.

The DVD is packaged in a standard Amaray case with artwork that emphasizes the fact that Cuba Gooding Jr. is in this movie. Considering their recent output it may have made more sense to put J.K. Simmons on the cover. The copy plays the movie up as an action movie when it’s really more of a drama, but maybe the copywriters just had as much trouble as I did figuring out what the movie is about. The only extras are a trailer and some previews which is perfectly understandable because the movie doesn’t really deserve anything else.

Movies like this always leave me a little baffled. You have to admire the technical skill and professionalism of everyone involved, but how could they not recognize that the script did not make any sense. How is it possible that nobody raised there hand and said “excuse me, but this stinks”. I mourn for the movie that could have been if somebody had the courage to stand up and yell “rewrite”. I’m afraid I can’t recommend this movie to anyone except for masochists and whoever is responsible for green lighting the Steve Martin Pink Panther movies. 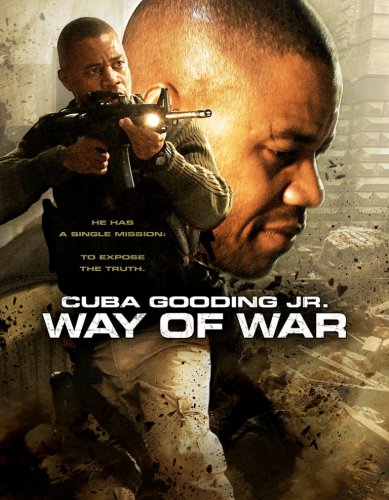