On Blu-Ray: A Mighty Heart

Michael Winterbottom, director of Welcome to Sarajevo and 24 Hour Party People, tackles the heart wrenching story of the search for Daniel Pearl before he was ultimately killed by Pakistani militant fundamentalists in February 2002. A Mighty Heart is released in the Blu Ray format by Paramount Home Video.

A Mighty Heart tells the story of Marianne Pearl (Angelina Jolie), and the struggle her, the investigators and government officials had trying to locate Daniel Pearl after he was captured by Pakistani militant fundamentalists while he was covering Al-Queda and Pakistani Intelligence as the South Asia Bureau Chief for the Wall Street Journal.

Daniel was held for 9 days before he was executed in a most barbaric manner, an act I won’t describe further. However, the audience is witness to what Marianne endured and the process of trying to find Daniel before his death.

His captors sent terrifying videos, showing Daniel being held against his will while they made their demands. These were shown on American television, as well as news networks throughout the world. They threaten his life and the life of any American, journalist or otherwise, that is in Pakistan covering Al Queda and the situation in Pakistan.

As the search continues, the Pearl home is covered with notes, maps, documents and more. The officials have told Marianne that there is a short window of opportunity to get Daniel back safely.

What is agonizing about the film are the moments that seem hopeful, only to be followed by sadness and sheer frustration as Daniel slips away from all of them, despite all of their work, determination and prayers.

Angelina Jolie turns in another fine performance as Marianne. Despite movie audiences focusing on her appearance, Jolie is a very capable and talented actor. She has “it” where it counts and can dial down the vanity to dig deep into characters. This part isn’t easy and Jolie handles it well.

The supporting staff, while not household names or Hollywood “A” list, turn in solid performances in this emotionally devastating film.

This film is emotionally unflinching and honest in its depiction of what Marianne and all those involved in searching for Daniel went through. There isn’t a false performance or emotion expressed in each frame of this film.

Is this a film that one would want to watch over and over? No, so I don’t know if it needs to be added to the permanent collection. But, it was overlooked in the theater during its original release, so don’t miss it now.

Presented in Anamorphic widescreen in 1080p, the film looks a good as you are ever going to see it. While the film was shot with HD digital cameras, this format showcases that choice well. The black levels are respectable with the color palette looking vibrant and realistic.This may not be the disc you reach to show off the HD home theater, but this film has never looked better.

The film is presented in Dolby TrueHD 5.1 Surround track. While this film is primarily people talking, the dialogue is presented crystal cleared and mixed well with the minimal ambient noise and soundtrack. It is not going to give your speakers a work out, but it is well mixed and presented.

A Mighty Heart is presented a standard Blu Ray amaray case with understated artwork appropriate for the film presented.

Journey of Passion, clocking in at 30 minutes, is a behind the scenes look at the challenges of bringing this heart wrenching story to the big screen. There are some brief looks at the real people the film was based upon, but more time spent with cast and crew, which I found a bit surprising.

Rounding things out, Committee to Protect Journalists features a look at the foundation that was established to protect the rights of journalists all over the world.

The bonus features are not plentiful nor presented in HD, so you might want to save your money on this Blu Ray if you were looking for tons of bonus features taking advantage of the format. 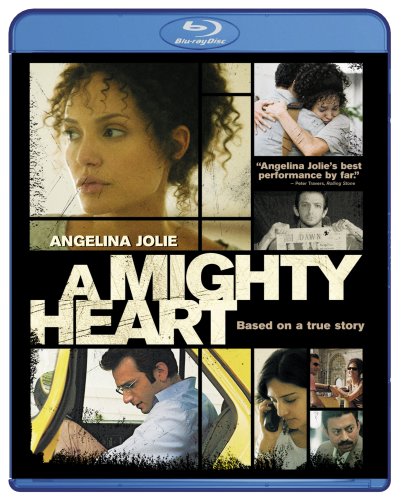