Green Lantern #38 ends the latest Green Lantern story arc, “Rage of the Red Lanterns”. Previously, Hal Jordan, with the help of a couple of Blue Lanterns, was trying to stop the emerging Red Lanterns. The issues before 38 do a good job of establishing the power struggle taking place in Green Lantern. The Red Lanterns feel that Rage is the overriding power in the universe while the Green Lanterns feel that courage is the dominant ideal. Contrast this with Sinestro’s Yellow Lanterns belief in fear leading the Galaxy and the Blue Lanterns complete faith in hope and we have a huge power battle over ideals done with fists and power rings. This is the beauty of all of the issues leading up to “Blackest Night”. The reader gets an understanding of what will finally culminate with the formation of the Black Lanterns.

I must admit that I’ve really been anxious to get to “Blackest Night”. However, Geoff Johns is doing a great job of keeping us reading until then. I like this latest story arc and really feel that the story is progressing so far. Issue 38 is big on action. We understand why they are fighting and get down to the actual fighting here. Johns really understands the characters of Hal Jordan, Sinestro, and Atrocitus. Each man represents his Corps quite well. The cliff hanger of last issue plays out well at the beginning too. We see Hal Jordan possessed by the Red Lantern ring and the Blue Lanterns trying to save him. This represents Hal’s doubt about his purpose and mission. Plus, we see how valuable Hal Jordan will be in the upcoming storylines and to each rogue lantern faction.

The ensuing battle is mixed with dialogue really well. Geoff Johns does a great job with mixing dialogue and action. In fact, I think he is one of the best writers DC has right now. He always makes sure that we aren’t falling behind on the story, which could be rather easy considering the huge mythology of Green Lantern and all of the revisions and additions being made. Johns knows Green Lantern and isn’t being stingy with this information. The only draw back is for totally new readers. I suggest getting some of the back issues before jumping right into “Rage of the Red Lanterns”. Thankfully there isn’t a Grant Morrison like plot that can’t be understood unless you have read 40 years worth of continuity, but it can be a little confusing.

Overall, Geoff John’s continues to bring great Science Fiction superhero fun to Green Lantern. Each issue is understandable and necessary with little to no filler. Just be warned new fans that Green Lantern is getting more complex, but it will definitely be worth your time with some effort on your part.

The “Origins and Omens” back up story is interesting and irritating at the same time. We are finally introduced to the Orange Lanterns, but only in a glimpse. This would be fine except the next story arc is “Agent Orange” highlighting the Orange Lanterns. I hate company wide crossovers that seem forced and “Origins and Omens” is definitely forced and unnecessary. This is a small complaint, but that extra space would have been nice for the Red Lantern battle. Still Green Lantern is a consistent book that is worth the price of admission.

The artwork has been tremendous on Green Lantern. The separate cover artists do tremendous work that is equally matched with the interiors. I can always tell characters apart, which is a big part of comic book art in my opinion. The huge space battles are detailed and the colors really stand out.

One of the strongest points in the book is the art done on the constructs created by the Green Lanterns. In the past, artists just showed them as simple concepts that Lanterns could make. Now, Ivan Reis gives them depth and character. This really brings home the concept of Green Lantern and shows their powers to the fullest extent. It seems to be an identifier for each Lantern and done exceptionally well.

Ivan Reis and Oclair Davis understand the science fiction elements in Green Lantern and show them perfectly. There are no generic looking alien races in this book. What we get is depth and attention to detail. The artwork is almost equal to the story. It really is nice to see artists that work well with the scripts they are given. 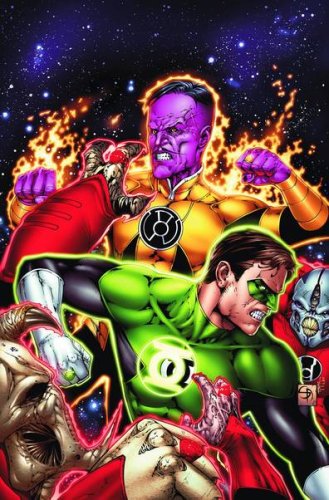