The slice of life film is a staple among independent cinema. Seems a stereotypical independent movie deals with heartbreak, loss, a struggle for identity, and day to day life, but does it in a non-Hollywood manner. Sadly, New York City Serenade does all of these things, but does them in a rather clichéd manner that is awkward to watch.

New York City Serenade, directed by Pulp Fiction actor Frank Whaley, tells the story of two friends and their separate struggles to live and work in New York while finding themselves in film and music. Already the plot seems trite and to an extent it really is forced and predictable. The friends, played by Freddie Prinze Jr. and Chris Klein, deal with relationship issues, work failures, and the very stereotypical idea of finding one’s self in the hectic world of New York City. As stated earlier, this movie is very cookie cutter and repetitive. I knew how it would end after about twenty minutes. My major problem with the film is its predictability. I hate how often I can figure out the plot points. In my opinion, independent film should make me view the world in a new exciting way. This film fails in this endeavor.

Acting is rather lacking throughout New York City Serenade. There is a noticeable change in New York accents in different scenes. It seems as though a Brooklyn accent comes and goes. Usually this is a small quarrel, but the difference is too frequent to ignore. The acting problem does not fall squarely on the actors however. The direction of the film has each character falling deeper and deeper into their blatant problems. Chris Klein plays the typical partying rock star wannabe with alcohol problems and a little girl who is slipping away from him. Freddie Prinze Jr. is a hopeful filmmaker forced to work at a photo lab while going to foreign films he does not totally understand.

Frank Whaley’s direction gives us more stereotypes in hopes of making us laugh, but all this action does is force me to see his film as condescending. I feel he is trying film satire, but lacking the skill to be subtle. Even the title suggesting a serenade feels clichéd and hackneyed. Throughout the film we are treated to cheesy musical numbers that have nothing to do with the film at all. A film like this should have New York as a character. However, New York just happens to be a location. In fact, the movie would work interchangeably in any city. While being about New York, much of the action takes place at a distant low budget film festival.

The biggest fault of the film is the disregard for the audience. Don’t scream at us with ideas. Let us figure out things on our own. If you want a smarter audience, write and direct for them. This seems like a poor first attempt at film making, but Frank Whaley is on his third movie. There are few bright spots in this film to be perfectly honest. I thought Jamie-Lynn Sigler does a good, yet short, job as Prinze Jr.’s girlfriend. We understand her hurt and pain without her going out of her way to tell us. In all, this film would work much better with deeper characterization and less cliché.

This DVD isn’t meant to be a wonderful spectacle of modern technology, but the picture quality is fair to good. I thought a lot of the dark colors were too dark. The presentation in 1.78:1 widescreen is fine for this release. Being in Dolby Digital doesn’t hurt or help the film. Again, there is nothing tremendous about the video of this release.

The audio is Dolby Surround 5.1. The already mentioned cheesy musical numbers sound fine, but do not fit into the film. This is the audio section, and this is the only note of merit in the audio department. The dialogue sounds crisp, but again nothing very moving. Do not expect to use this DVD to test your new surround sound.

Being an independent film, it has to toot its own horn. Four awards are present at the bottom of the artwork on the amarey case. While it shows the film’s merit by showing its awards, I feel it’s a cheap move since the seals look like Sundance awards. In addition, the only praise on the cover comes from Film Threat. Nothing wrong with them, but if you want indie credentials, find them from other sources. The artwork emphasizes Jamie-Lynn Sigler, who has a rather small role in the film. It seems cheap to me. The artwork is like the film, lackluster.

The only special features are an audio commentary with the writer/director and the secondary actors and a Behind the Scenes featurette. These features seem forced and it bothers me that none of the principle actors would come back for the commentary. 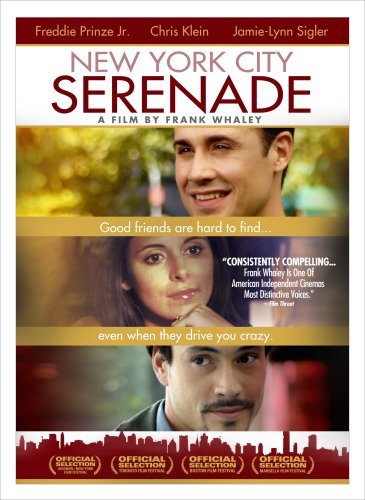