I am a sucker for “talking animal” movies. I have been since I was a kid and I am not going to apologize for it. We all have guilty pleasures. So, before I get emails, if you could read over my Top 25 favorite films, directors Robert Bresson, Akira Kurosawa and Vittorio DeSica are on that list, so I consider myself a cinematic connoisseur with a variety of interests and tastes, okay? Beverly Hills Chihuahua: Blu Ray was recently released on DVD by Walt Disney Home Video.

Chloe the Chihuahua (Drew Barrymore) is the beloved and pampered pet of Aunt Viv (Jamie Lee Curtis). Viv owns Vivacity Cosmetics and is very successful. In fact, she is so successful, Chloe has her own island in the oversized pool and Viv arranges play dates for her. Life is good for Chloe.

That is until Viv has to travel and leaves Chloe in the care of her immature niece (Piper Perabo) who almost immediately decides to take a trip with her friends to Mexico for a vacation of boys and beers. They pack Chloe in the car, but don’t pay much attention to her.

While Little Miss Self Centered is fixated on her and her friends shallow pursuits, Chloe is captured by dog-nappers who want her for illegal dogfights. Things turn dark in Disney world, don’t they?

It is a good thing that Chloe meets the street smart Delgado (Andy Garcia), a German Sheppard that while tough has a heart of gold. But, the bad guys have a dog that causes every dogs “furry” knees to knock and that is Diablo (Edward James Olmos), a mean Doberman that has a past with Delgado.

All of this danger has made Chloe forget about Papi (George Lopez), a scrappy, blue collar (no pun intended) Chihuahua that has romantic intentions for her. Her romantic life has to be put on hold so that she can excape the bad guys and get back to her pampered life by the pool.

And how does the movie twist and turn and eventually wind up at with an iguana and a rat in tow and at the sight of pre-Columbian ruins?

While virtually every frame of this movie is something you have seen, particularly if you have seen the Disney animated classic film Lady and the Tramp or 101 Dalmations, the voice work and the cute pooches make for a pretty good time.

Does this go in the annals of greatest animal movies of all time, like the original Benji film (1974) or For the Love of Benji (1979) or even later films like Milo and Otis or Babe? Well, no in all honesty.

But, it was more enjoyable than I thought it would be and would make the young kiddos in your house pretty happy. So, add it to the rental queue for them but it doesn’t have to be a permanent fixture on the shelf.

The show is presented in Anamorphic widescreen in 1080p transfer. The film looks very respectable with excellent detail and fantastically vibrant color. The black levels and contrast is decent.

Presented in English 5.1 PCM and in English Dolby Digital 5.1. The dialogue and each bark of a dog is crystal clear. I noticed some nice moments of well mixed ambient sounds that made nice usage of all speakers in a home theater.

The film is presented in a standard Blu Ray amaray case with a cute pic of the dogs on the cover.

There is a nice selection of bonus features to explore on this release. A Blooper reel and deleted scenes with commentary are offered.

A feature commentary with Raja Gosnell is offered and he keeps things very serious, considering the content of the film. There is a cute animated short film called Legend of the Chihuahua that is some fun. 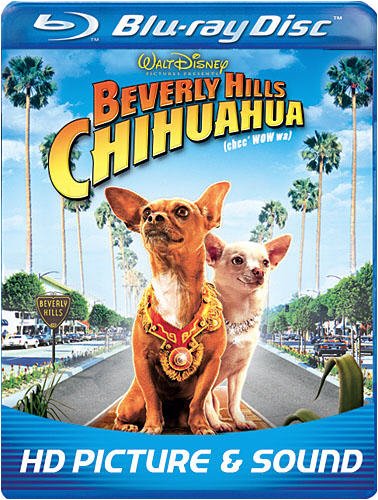