On Blu-Ray: The Bird with the Crystal Plumage

You either get Dario Argento or you don’t. He’s the godfather of the “giallo” style of storytelling on film. Basically, this kind of film is a horror/thriller in which a killer stalks and murders beautiful women. Other requirements to the style are POV shots of the killer’s hands in black leather gloves. Sure, it sounds simple and straightforward but when you apply lush colors and camera work, you get some groundbreaking films. Some of the most influential horror films ever made are in this style. Argento has been called the Italian Hitchcock for good reason, this style of filmmaking features shades of Hitchcock when it’s at its best. These kinds of films were the grandfathers to the slasher films of the late 70’s and early 80’s. Standout films from the director include Suspiria, Opera, and Deep Red. If you don’t get Argento, you may say he’s over indulgent and even a bit creepy and you’d be right. What you’re missing is that these are good traits.

An American author, roaming the darkened streets of Rome, comes across a brutal attack on a woman in an art gallery. After failing to stop the murder of the woman, the police hold him in Rome as a potential suspect. He cooperates fully believing he saw something that could help; he just doesn’t know what it is. Soon, he and his girlfriend begin receiving threatening phone calls and they even get attacked in an attempt to shut him up.

This is Argento’s first film and it is fascinating to view having seen so many of his later films. The story is a bit flawed with some extreme lapses in logic in favor of horror elements, but Argento’s visual style is in full effect here. Even though this is his first film, it’s as stylistically strong as most of his follow ups. His ever popular use of splashes of vivid reds is apparent throughout mixed with some great use of shadow. There are numerous gorgeous set pieces throughout and his work with Oscar winning cinematographer Vittorio Storano is nothing short of beautiful. Part of what makes Argento’s work so unique is his parallel of completely gorgeous shots and sets and extreme gore. This movie in story is a perfect precursor to the better developed Deep Red and visual style is a hint of what is to come in his most popular film, Suspiria.

The Bird with the Crystal Plumage not only kick started giallo as a genre but it also introduced a few elements into Argento’s films that would stay prevalent all the way to through his career. The biggest has to be the black gloves of the killer and the extended sequences shot from the killer’s perspective. Argento is able to create amazing levels of tension and suspense with these tactics. Any Argento fan worth his slat knows that any time you see those black gloves in any Argento film that his hands are actually inside them. The other major event in this film is that it’s the first Italian color film to include a gay character that isn’t in the film because he’s homosexual. He’s just in the film as a character that happens to be homosexual. His preference has nothing to do with his presence in the film and nor does it have any bearing on the plot at all.

When you watch this film, you’ll be screaming at characters for making some really unbelievable decisions which will help create more victims for the killer, but if you can give yourself over to these lapses you’re in for an entertaining and disturbing film. This is a must own for Argento fans and those looking for groundbreaking filmmaking in the genre should pick it up as well. Dario Argento has made some of the most disturbing films of all time and The Bird with the Crystal Plumage is what started it all.

This 1080p presentation is quite stunning featuring very high detail, gorgeous color representation, and solid black levels. The Bird with the Crystal Plumage is nearly 70 years old so the fact that a print even exists is exciting, let alone one in good enough shape to produce this quality of hi def presentation. There is some print damage and a thin layer of grain throughout the film but even with those flaws the image is still in shockingly good shape. Night scenes where people typically disappear in the murky darkness look fantastic here. It’s not perfect but for a 40 year old movie it’s as close as you could hope for and for a fan of the movie it’s reason enough to buy a blu-ray player.

Blue Underground typically offers up tons of audio options for their special edition releases and this blu-ray is no exception. There are 7.1 DTS HD, 7.1 TrueHD, and 5.1 Dolby Digital 5.1 EX options available in English and an Italian Dolby Digital 5.1 EX track with English subtitles. Thankfully, Blue Underground pulls an Animeigo and subtitles some of the Italian signs in English throughout the film. The mixes aren’t extremely different from one to the next but the HD tracks are slightly stronger if you have the system to take advantage of them. Dialogue, score, and sound fx are well mixed and there are even a few surround effects throughout the film. This film was originally in mono, so the fact that Blue Underground made the film as immersive as they have is amazing.

The single disc presentation comes packaged in a standard slim amaray case with artwork taken from the original Blue Underground DVD release. The art is perfect for this film featuring an air of mystery, just as the film does.

Sadly, there are no new bonus features for this blu-ray release. Everything here was taken from Blue Undergrounds previous DVD release. These extras are good but the featurettes are in standard def and if you owned the previous version of the film then there’s nothing new here for you.

There’s a feature length audio commentary from journalists Alan Jones and Kim Newman. They offer a ton of great information about this film and about Argento. If you can’t hear from the man himself this is about the next best thing.

My favorite bonus feature is a featurette titled Out of the Shadows. This too short featurette is basically an interview with Dario Argento. The reality is that the interview runs long enough I just can’t get enough of this classic director. Painting with Darkness is also interesting. This featurette is an interview with cinematographer Vittorio Storaro who was as vital as Argento himself when it came to creating the look of the film. There’s an interview with Ennio Morricone called The Music of Murder about his score for the film. Morricone has done some of the greatest scores in Italian film, so it’s quite interesting to hear him discuss this one. Lastly, Eva Renzi discusses her experiences with the film in Eva’s Talking.

There are also some TV spots and trailers for the film. These are all great extras but they are all in standard def and are double dips. It would have been great to get some blu-ray exclusive.

The Bird with the Crystal Plumage isn’t my favorite Argento film, but it is one of his most important films. It’s a great place to start if you’re new to his work or new to Italian horror in general. 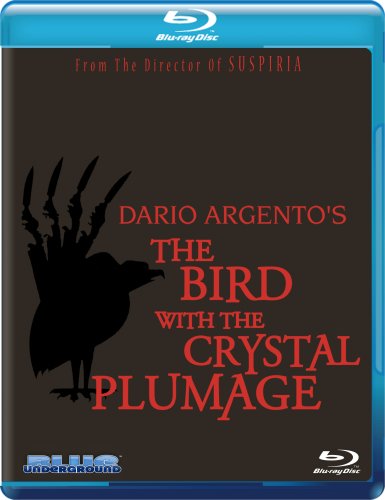