I was a rabid fan of HBO’s and later Bravo’s Project Greenlight. In that series, a lucky writer/director was given a million dollars and the support of producing team Ben Affleck and Matt Damon to make his film come to life. The first two seasons of the series were much more interesting than the films that were actually produced. In the 3rd season, the producers were given the mandate to produce a successful film, not just create a reality show about people making a film. The idea was to do a horror film because those films nearly always make money. Wes Craven (A Nightmare on Elm Street) was brought in as an additional producer and the contest began.

John Gulager, an awkward geeky dude, inevitably won the competition mostly based on the visuals of his short films and his script and pitch for a film called Feast. He was really the underdog but he had a singular vision and a campy style that made an impact on the film. In theatrical release the film probably would have made good money but just as the film was finishing up production there was a big shakeup at Mirimax that left the film with a limited one or two day theatrical run just before the DVD was released. The movie still found a way to make a few bucks so two sequels were greenlit.

Feast II and III were both released direct to DVD so the only way you’d see them is if you came across them in a bin in your local Best Buy or it randomly popped up in your Netflix queue. With that said, this 3rd film makes a really ballsy decision. It picks directly up where the second film left off with no recap and no explanation of what brought these characters to the situation they are in. That’s a real problem for something coming out direct to DVD because many viewers may not have seen the first two films. If you haven’t seen them, it’ll take a long time for you to settle into the film and figure out what’s happening. That’s not to say that the plot is complex or deep because it’s not, but even with a simple plot, the audience needs an opportunity to invest in it and in the characters.

Speaking of the characters, they are mostly one note with no real names or any depth. They are cardboard cutouts of 70’s era action/horror film characters. They have names like “Bartender” and “Honey Pie”. The film is supposed to be campy and often the jokes work but just as often they come off childish and just not fully. The gore does spill though and many of the shots truly define why Gulager won his season of Project Greenlight. His use of angles and color create a really striking style. At the end of the credits ,this is a step above a Roger Corman or Troma film except that it’s creative shot and surprisingly well acted at times. So if you’re into the late 70’s early 80’s type of gory horror film, then this one’s definitely worth a look. When I say gory believe me: I mean gory. There’s blood and guts aplenty throughout this film from beginning to end. Seeing the first two films first is highly recommended though. Feast III will of course come off better if you know who the characters are and what they’ve already been through.

Feast III only runs 70 minutes, so it cranks through at a fairly blistering pace, which is a good thing. If you are leaning on special effects to keep viewers attention ,it’s like a kung fu movie, you have to get to the point and not overstay your welcome and this film does just that.

The anamorphic widescreen presentation here is solid throughout with great detail and color representation. The overall desaturation of color here establishes a style for the film that looks great on DVD. Now, with that said the darker sequences are a bit crushed and are often hard to see and the low budget CGI stands out a bit too strongly here. There’s also a good bit of grain in places. It’s far from perfect but for a low budget direct to DVD film it looks pretty good.

The Dolby 5.1 presentation features a clean mix of dialogue, score, and sound effects. There are some minor surround effects but overall it’s a pretty standard presentation.

The single disc comes packaged in a standard amaray case with a slipcover. The artwork is good but not memorable in any way. It would have been nice for the art to better represent the style of the film.

The main extra on the disc is an audio commentary with the director, producers, and writers. There’s tons of insight in this commentary in the process of making this film but Gulager can be a little tough to listen to over the running time due to his mumbling delivery. Luckily there’s a nice balance with the other participants. They all laugh and actually make fun of a lot of the film.

There really needed to be more supplements here. What about an F/X featurette? A “Catch Up with Feast” featurette would have been cool too.

Feast III is overall a failure but there are just those shots and moments in the film that are so cool looking or are just so much fun. Gulager really needs to direct someone else’s script with a different group of actors to show what he can really do. 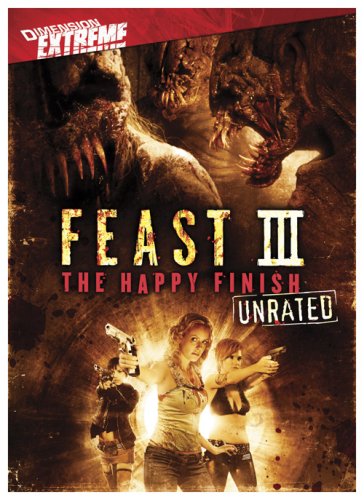