On Blu-Ray: Miracle at St. Anna

Spike Lee has made some movies I liked: 25th Hour and Do the Right Thing. He has also made some real stinkers, anyone remember Girl 6? So, where does Miracle at St. Anna fit into Lee’s filmography? Miracle at St. Anna, based on a true story, was recently released on Blu Ray by Touchstone/Disney.

The movie opens as Hector; a senior citizen working in a post office pulls out a gun and kills what appears to be an innocent customer. When questioned by the responding police, he won’t tell why he did it.

An eager reporter, snooping in Hector’s apartment, finds the head of an antique statue and discovers that the statue is worth nearly 2 million dollars. Why does Hector have this and is it connected to the man that found himself at the wrong end of Hector’s gun?

The audience learns more about Hector, the statue and his past through flashback, which make up the bulk of the film’s running time.

The foursome finds themselves trapped near a small village during operations in 1943. While trying to figure out what to do to save themselves, Private Train risks his life to save a young Italian boy.

The boy brings the good hearted, yet simple Train and his fellow soldiers back to his village. They soon find themselves ensconced in the lives of the villagers and grow very close to many of them. They have to continue to fight the Germans, protect their new found friends and each other. And we soon learn about the mysterious statue head. What is its story and will the four separated soldiers ever find the rest of their division?

While there are some great moments in this film, the film’s pace is bogged down in too much melodrama and social exposition. It seems that it is very hard for Lee not to make a overtly message driven film. This obsession of Lee’s is what spoils the natural intrigue of the story being told in the film. It doesn’t need message driven into its dialogue, just let the story unfold.

Spike Lee, in my opinion, doesn’t trust his own fans and movie audiences in general. It is as if he thinks we are too emotionally ignorant to “get” what he is trying to say in the films he has made. Therefore, he comes on too strong or forces his actors to recite lines of dialogue that are dripping with message, but lacking in emotion.

It is not that Lee can’t make a good film; I have liked some of his work. I have always felt Lee had a lot of natural talent, but it gets lost in favor of his seemingly massive ego. Lee has always seemed to direct from his mind and not his heart.

The performances in the film are a bit uneven particularly that of Omar Benson Miller playing Train, which is another problem you could lay the blame on Lee for. Miller plays his character too broadly and one dimensionally.

The cinematography and setting for the film is absolutely beautiful, making one want to book a flight to Tuscany as soon as the credits roll.

So, while the film is far from perfect, if you are curious what Spike Lee would do with a war film, you could add this to the Netflix. But trust me; there are better war films out there. Perhaps see out a documentary about the Buffalo Soldiers: I think I would have enjoyed that more myself.

The show is presented in Anamorphic widescreen in 1080p transfer. The film looks spectacular with excellent detail and fantastically vibrant color. The black levels and contrast is very respectable. This film looks absolutely great and makes the most of this format.

Presented in TrueHD 5.1 Surround, the soundtrack is immersive and lush. Every syllable of dialogue is crystal clear However, some of the gunshots and explosions were overly loud in the mix to me.

The film is presented in a standard Blu Ray amaray case.

There is a plethora of bonus features on this Blu Ray release. Deeds Not Words finds Lee discussing the novel, written by James McBride, also present for the discussion, with actual veterans of the 92nd Buffalo Soldier division.

The Buffalo Soldier Experience reveals more of the story of the soldiers and their relationship with Italian villagers during the war.

There are 9 deleted scenes, coming in at over 20 minutes. I found it surprising that there wasn’t a commentary. 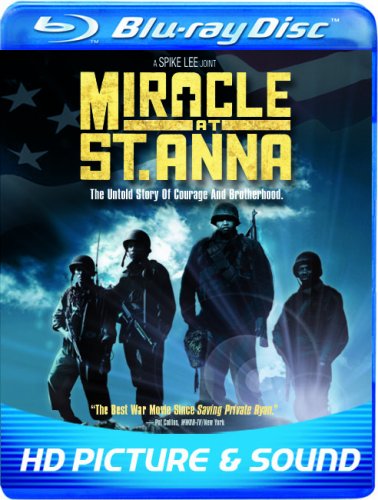