I really liked the first Madagascar film. Well, I really loved the penguins and if you are honest out there readers, you did to. I can almost see your silly grins from here. So, if the penguins are back, count me on. Madagascar: Escape 2 Africa -Blu Ray was recently released by Dreamworks Animated.

The whole gang is back for the sequel to this popular animated film: Marty the Zebra (Chris Rock), Alex the Lion (Ben Stiller), Melman the Giraffe (David Schwimmer) and Gloria the Hippo (Jada Pinkett Smith). Also back for another adventure are my favorites, the penguins: Skipper (Mark Mc Grath), Kowalski (Chris Miller), Private (Christopher Knights) and Rico (John DiMaggio).

The film begins as the gang is attempting to return to New York via a repaired crashed plane that the penguins have fixed and are going to pilot. As you can guess, it doesn’t go well and everyone winds up in Africa. It is this thought that got them to Madagascar in the first place, because Marty convinced everyone that all animals belong in the wild instead of zoos.

Life is much different in Africa and lots of exciting things happen quickly. Alex finds his birth father and mother and learns how he got from Africa as a youth after he was poached. Gloria has her eyes set on a cute male Hippo named Mota Mota and Melman winds up learning witch doctor skills and taking on a new profession. Marty finds tons of other zebras and is delighted when they all act and speak like him.

The penguins have their own affairs to attend to. They set forth to repair the plane again and carjack some tourist jeeps to utilize in their plans. Skipper is still hard on the sweet Private, even though he tries so hard.

Life in Africa, while exciting, isn’t all it laughs and giggles. Alex learns he is going to have to take part in a lion “coming of age” ritual that is not what he thought, Mota Mota is not the charming boyfriend Gloria thought he was, Marty the Zebra is going through an identity crises after feeling that he is not as unique as he thought he was. And, Melman is convinced he is dying after the “spot” of doom shows up on his skin.

And, if all of this wasn’t enough, all of the animals learn that their vital watering hole is drying up at fast pace and King Julien, everyone’s favorite lemur (Sacha Baron Cohen) is suggesting someone has to sacrifice themselves to the “water gods” to save everyone. Things are going to get pretty ‘hairy” before it gets better. Yes, that pun was intended.

Madgascar: Escape 2 Africa has a plot that is easily guessed from the first frame. There isn’t anything remarkably surprising or emotionally challenging in this film. This film just wants to make you laugh at the pop culture jokes and the sight gags it has to offer.

So, this makes for a mostly enjoyable night of viewing for you and your rug rats, or just yourself if you are just a fan of animated films, like I am . It doesn’t have to take up valuable shelf space if you don’t want: add it to the Netflix queue.

The show is presented in Anamorphic widescreen in 1080p/AVC MPEG-4 transfer. The film looks spectacular with excellent detail and fantastically vibrant color. The black levels and contrast is very respectable. This film looks absolutely great and makes the most of this format.

Presented in TrueHD 5.1 Surround, the soundtrack is immersive and lush. Every syllable of dialogue is crystal clear and mixed well. I did not find myself “riding” the volume button on this one.

The film is presented in a standard Blu Ray amaray case with a cute pic of the critters on the cover.

A plethora of bonus features await your exploration on this release. An Audio Commentary with Directors Eric Darnell and Tom McGrath and producers Mireille Soria and Mark Swift. It is mostly entertaining and worth a listen, especially if you a fan of Tom Mc Grath’s Skipper voice because he brings it out often.

A “Making of featurette” is offered, as well as one covering “The Cast” and “African Adventure”, that explores the actual African locations that were used as an influence in the film.

Also offered is “The Heart of a Lion” that looks at the real lives of lions, “The Bronx Zoo: Madagascar” shows the zoo’s Madagascar exhibit at the Zoo and “Jambo Jambo: Swahili Speak” explores the language used in some areas of Africa. All of these are enjoyable and some of the photography of the animals is truly beautiful.

As far as exclusive HD content, there are three bonus PIP or Picture in Picture tracks to enjoy, a Trivia Track and an option to download BD-Live content.

All things considered, a very nice collection of bonus features to accompany the film. 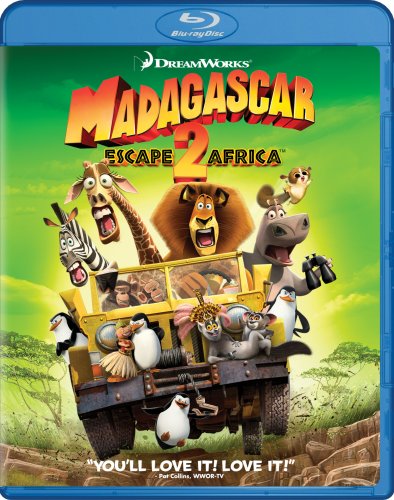