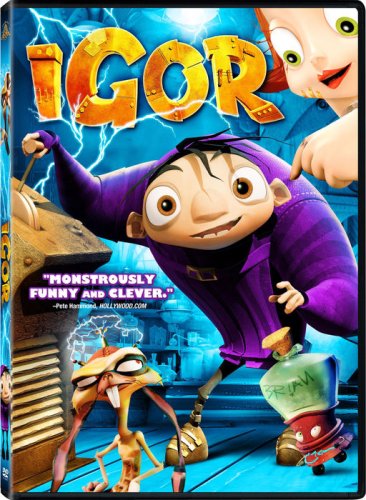 Can the guy that wrote Home on the Range and Lilo and Stitch 2: Stitch has a Glitch direct an entertaining animated film? Something that can compare with the films that come out of Pixar? Igor: Blu Ray was released on DVD by MGM and I gave it a try.

Igor (John Cusack) is the assistant to King Malbert (Jay Leno). Malbert rules the world of mad scientists in the kingdom of Malaria (yes, you read that right) with a sense of style and a fist made of iron. There is a local science fair and Malbert is determined that he and his “Igor” are going to win.

Through some funny circumstances, Igor sees a chance to achieve true greatness: he going to make and bring to life his own monster. He has already brought to life a “road kill” rabbit named Scamper (Steve Buscemi) and robot with an enormous brain (Sean Hayes), that are his companions now. So, to impress all the evil doers in Malaria, Igor must make a fierce monster and impress everyone at the upcoming science fair.

So, Igor gets his noodle working and creates a gigantic creature named Eva (Molly Shannon). However, Eva isn’t all that Igor dreams for her to be. He wants her to be evil, but she seemingly can do nothing but good. Igor tries and tries, but Eva is just a goody two shoes.

What is Igor going to do when Malaria’s number one with a bullet mad scientist, Dr. Schadenfreude (Eddie Izzard) discovers Igor’s invention and wants the plans, or even Eva herself?

Igor is a fun little romp. The voice actors are well cast in their parts. Of particular note, Eddie Izzard is great as Dr. Schandenfreude and Steve Buscemi as Scamper. And, even though I was never a fan of the television show Will and Grace, Sean Hayes does a nice job with the character Brian.

Anyone that is a fan of Christopher Guests films (Best in Show, Waiting for Guffman) knows the name Jennifer Coolidge and she is great in her part as well.

The character design is wonderfully quirky and refreshing; which is more than I can say for the plot. Igor’s plot is not the most original that you will find among animated films of late. “Believe in yourself” or “Try to be good” are all shop worn and clichéd. It is the character design and voice work that is the stand-out in this film.

While this film seems to be getting compared to “The Nightmare Before Christmas”, I don’t see that at all. I guess it is only because both films have decidedly gothic influence or darker story elements. Although I did notice a character that looked a lot like the character The Mayor from The Nightmare before Christmas. I am sure the filmmaker would want us to just call that homage, right?

Igor makes for a fun night a viewing. It isn’t a classic that has to go in the collection, but just you or you and your kiddos can add it to the Netflix queue, at least.

This is presented in Anamorphic Widescreen in 1080p. The Blu Ray transfer is impressive with eye popping colors and very respectable black levels. I did not notice any artifacts or line enhancements.

The Audio is presented in English DTS HD 5.1 and Spanish 5.1 Dolby Surround. Every syllable of dialogue is crystal clear and well mixed with the soundtrack.

Presented in a standard Blu Ray amaray case with a cute pic of Igor.

There are some nice bonus features to explore on this release. First up, an entertaining commentary with Director Tony Leonidas, & Writer Chris McKenna, and Producer Max Howard that is worth a listen.

There is an Alternate Opening Scene to enjoy.

Rounding things out are Storyboards and Posters. While maybe not the most plentiful of bonus features on a DVD release, the ones that are offered are entertaining.