On DVD: His Name Was Jason 30 Years of Friday the 13th 2 Disc Spallter Edition

Jason Voorhees made is first appearance on film in the closing moments of the first Friday the 13th film back in 1980. He hacked his way through one sequel, and in the third film, which was in 3-D, he became iconic when he dawned the hockey mask for the first time. This new documentary examines who Jason from nearly every conceivable perspective.

The creators of this epic documentary about Jason sat down with over 80 people that were involved with Jason in some way throughout the 12 (including the upcoming remake) Friday the 13th films. Featured are many of the actors, directors, special effects people, and writers that were all a part of the cultural icon’s life on the big and small screen. The opening of the film feels a little hectic as a ton of those interviewed get brief statements to get the ball rolling. While it does work to establish what the movie is about it often feels like the comment was just chopped a little too quick. With that said, it’s amazing to have some representative from every film ready to discuss who and what Jason was and what he ahs become. Some notable interviews include Sean S. Cunningham (director of the first film and producer of other installments), Betsy Palmer (Jason’s mother), Kane Hodder (Jason) and many others.

Along with comments from all of the people involved with the film there are also interviews with filmmakers who were impacted in their own careers by Friday the 13th and Jason including Tony Timpone (Fangoria Magazine), Felicia Rose (Sleepaway Camp), and Adam Green (director of Spiral and Hatchet). Along with the filmmakers are several online wirers who have extreme passion for the horror genre and Friday the 13th. Hearing from people like Adam Green and Felicia Rose was much more interesting than the online writers. The writers come off mostly as just hardcore fan boys which is completely valid but I appreciated the filmmaker perspective much more.

The attempts to psychologically analyze Jason get a bit monotonous because in the end he’s a fairly base character without any real depth. The comments on his impact in film and in pop culture were much more interesting. The affects he had on the lives and careers of those interviewed was quite interesting too. Famed gore special effects artist hosts the film and occasionally appears in throughout the film to set up segues into different topics. As much as I like Savini having him host the film feels clumsy and cheap. I’d rather have just seen him get interviewed along with the rest of the stars. One other thing, where was Corey Feldman and directors Steve Miner and Ronnie Yu? It’s a shame that the creators of the film went to so much trouble to get these interviews together and still managed to miss some important players within the franchise. Overall these interviews were great fun and a must see for fans of the series. It may seem a bit ridiculous to try and dig into a character like this with any amount of depth but when you consider just how influential the character has been on horror films and how much of an impact he’s had on pop culture this film doesn’t feel like such a reach.

The widescreen presentation is very basic as it consists of mostly talking heads. With that said skin tones and other colors look fine and grain is kept to a minimum especially considering most of the backgrounds to the interviews are so dark. It’s not phenomenal but the presentation is adequate for the kind of film this is.

Again the audio is very basic considering that the film is almost exclusively made up of interviews. The 5.1 audio is mostly limited to the center channel but dialogue, the most important part of this film, is clean and crisp.

This 2 disc “Splatter” edition is presented in a standard amaray case with a hinge for the extra disc. The cover art is great and says everything necessary about this film.

There’s quite a bit here as far as extras. First up is “Friday the 13th in Four Minutes”. This is a fun little feature that tells the story in a really short time. This is obviously influenced by the web recaps of Lost and BSG. “The Men Behind the Mask” is a group of extended interviews with the actors that played Jason across all of the films. These extra comments just offer up a little more information from these actors about their experiences behind the mask. The extra information is good but it did need to be cut from the main film for time.

“Final Cuts” is probably the coolest extra in the package. It’s nearly a feature length additional documentary made up of additional interviews with the directors of the films. There’s a ton of fascinating stuff here about the making of these films. It’s good that these interviews are separated from the rest of the main film because here the focus can be completely on filmmaking.

There’s a bevy of additional short featurettes that offer a bit more insight into the films but more interestingly they feature some of the cast walking around locations from the films in 2008 when His Name Was Jason was shot. It’s fun to see these locations as they look today. There’s a really brief script to screen feature with some of the writers discussing their process. Finally there’s a fan film that’ll really only appeal to the hardcore fan.

All together there’s over 4 hours of bonus features and most of them are either informative or entertaining. Anchor Bay did a fantastic job assembling all of these additional features to go with this film.

His Name Was Jason offers more information than a fan could ever hope for about Jason and the films that he was in. With only a few exceptions everyone who had any sort of investment in the franchise gets time to talk and share experiences with the films. 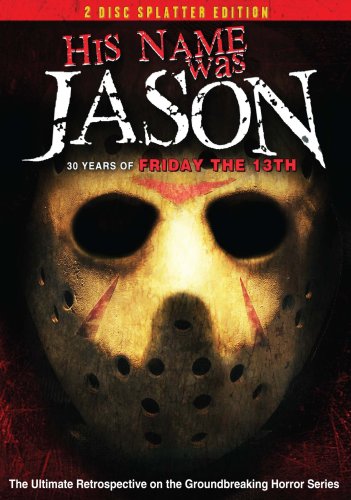