Teen films have become High School Musical or 10 Things I Hate About You and Bring it On. But before that, we had great snarky films like Heathers. And, because of Heathers, we have films like Election, recently released on Blu Ray by Paramount Home Video.

Jim McAllister (Matthew Broderick) is like a lot of teachers I bet many of us had in school. He wore the uncool short sleeved dress shirt with cheap polyester dress pants and ugly ties that were inoffensive and drab. Maybe he tried to be the “nice teacher” that joked around or cut you a break or maybe he didn’t. But, none of us knew or cared what his life was like after the bell rang. For all we knew or cared, did he have a life outside of the gray walls of school?

Jim is a straight as an arrow government/civics teacher at Carver High. He has a friend that is a fellow teacher and they spend their time counting the days until summer break. Jim’s wife has turned their home life into nothing more than eating, making inane small talk and trying to make a baby during what seems to be joyless sex.

But, what gets Jim’s blood pressure rocking is Tracy Flick (Reese Witherspoon), a know it all, uptight, perfectionist student that is so blindly ambitious and power hungry, it just makes Jim’s blood boil. We all remember the Tracy Flick types, right? The one that you feel is going to have heart failure unless the teacher calls on her first. The Tracy Flick types are the first ones to remind the teacher he or she has forgotten to assign homework for the night. Yeah, you know the type.

Instigating the bad feelings is a little piece of bad history between Tracy and Jim’s friend and fellow teacher that didn’t end well. So, when Little Miss Can’t Be Wrong wants to run for student president, Jim backs popular but moronic footballer Paul Metzler (Chris Klein) for the office. He is going to make sure this is one time Tracy doesn’t get exactly what she wants. And he isn’t afraid to break a few rules to get his way. This is when things go from okay, to bad to much, much worse.

Election beats with a snarky and dark hearted sharp wit throughout its running time. It never goes for clichéd teen comedy plot devices; it instead takes a note from the Heather’s play book and keeps things nice and sarcastic.

Matthew Broderick and Reese Witherspoon are great in their parts. Alexander Payne would later write and direct About Schmidt and Sideways and if you are fan of these films, you are going to enjoy this little film nugget.

Election is a dark and dirty film that is definitely worth your time. And remember, in the words of Tracy Flick “You see, you can’t interfere with destiny. That’s why it’s destiny. And if you try to interfere, the same thing’s going to happen anyway, and you’ll just suffer.”

This is presented in Anamorphic Widescreen. The blu transfer is okay and surprisingly, there are a few instances of what seems to be grain. The black levels are respectable and the color is mostly vibrant.

The audio is presented in Dolby Digital 5.0. The audio mix is wonderful with dialogue crystal clear and vibrantly mixed with ambient sounds.

Presented in a standard Blu-ray amaray case, the artwork is tastefully understated.

The only bonus feature is a commentary with Alexander Payne. While enjoyable, the bonus features are very paltry for the premium price paid for Blu Ray releases. 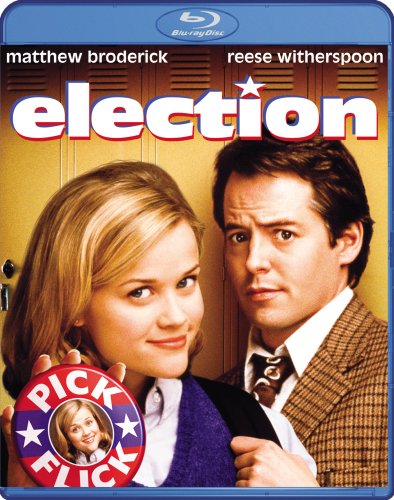