I am a big fan of the British series The Office. It is on that show that I first saw Ricky Gervais and I have been a fan of his since. So, would I like Ghost Town just because of Gervais? I typically do not like this type of film so I was hesitant as I popped the disc in the player. Ghost Town: Blu Ray is released by Paramount Home Video.

Betram Pincus (Ricky Gervais) isn’t a likable man, either by birth or by profession. He is a dentist with a seriously sour disposition. He doesn’t like anyone around him and looks down upon everyone. He spits bile of the verbal variety on everyone that darkens his path. Until one day, because of a mishap, Pincus finds himself in the hospital. His visit doesn’t go well initially and Pincus is “dead” for seven minutes until he is revived. After he leaves the hospital, Pincus’s sour life is forever changed.

He now has the ability to non only see ghosts, but to speak with them as well. This leads to some funny situations and Pincus has a hard time adjusting to his new ability and the responsibilities that come with it.

One ghost in particular, Frank (Greg Kinnear) is desperate for Pincus’s help. He wants him to help save his wife Gwen, who is still alive (Tea Leoni) from marrying a jerk of the meanest ilk.

So, where his life was once stuffing people’s mouth with cotton, pulling teeth and hurting feelings, Pincus now finds himself trying to find his altruistic center and help a ghost. And, it doesn’t help that Gwen is attractive to him as well.

You don’t need me to point out where all of this is going. There certainly is not a big twist ending in this film of The Crying Game variety. As is the case with a lot of romantic comedies, the plot points and story are a lot the same and can be predicted. Fans of this genre don’t watch these for complex plots or a lot of emotional depth. Instead, they watch them for “light” entertainment, a few laughs, a few “aw shucks” moments and the chemistry of the lead actors.

While I would have never thought that Gervais would have on-screen chemistry with Leoni, they make this work somehow. If you like Kinnear as an actor, you will appreciate him here. If you are not, nothing here will change your mind.

I enjoyed Gervais’s work in the film, particulary when he was the “meaner” version of Pincus, not as much when he wasn’t. I would love to see him have a much more consistently snarky part to sink his teeth into because I miss his David Brent from the old The Office days.

While Kristen Wiig doesn’t have a lot to do, she still is very funny and does a lot with a smaller part. She truly is one of the main reasons to even try to watch Saturday Night Live these days where she is a cast member.

So, fans of Gervais might be a bit disappointed and wish for him to have something else to do stateside after watching the film. Leoni and Kinnear fans should be happy.

While I still cannot say I am a fan of this type of film, this was entertaining enough and I can see if you really like this genre of film, you might get a kick out of this one.

This is presented in Anamorphic Widescreen. The blue transfer is first rate and the colors are vibrant. The scenes shot in Central Park in New York City look absolutely beautiful. This is an all around solid transfer onto Blu Ray.

The audio is presented in Dolby True HD 5.1. The audio mix is respectable with dialogue crystal clear and vibrantly mixed with ambient sounds.

Presented in a standard Blu-ray amaray case, the artwork is what is to be expected with this type of film.

There are a few fun bonus features to explore on this release. First up, a funny commentary with David Keopp and Ricky Gervais that is definitely worth a listen. Two making of featurettes that while standard, a fan of the film would enjoy.

Rounding things out, a gag reel that Gervais fans are going to love. 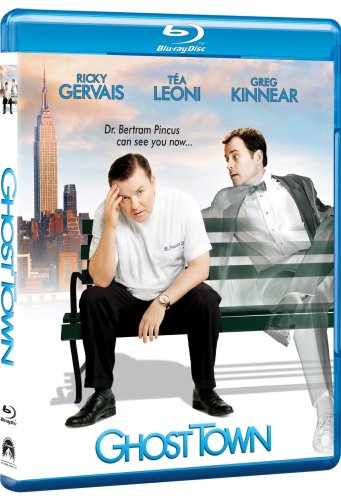