We live in a visual world. Most of what we do is based on seeing and it’s
Generally it’s taken for granted. What would happen if huge numbers of our population suddenly couldn’t see? That’s one of many questions the film Blindness asks.

Mark Ruffalo plays an eye doctor who gets an emergency visitor, a man who has lost his vision for no apparent reason. His vision loss is opposite what is typically understood about vision loss. Rather than having everything go black everything actually goes white. So rather than no light getting in, too much light gets in. One character refers to the symptom feeling like “swimming through milk”. From this one man a pandemic begins spreading to the doctor, his other patients, and even his employees. The numbers of the infected grow so high the government decides to quarantine them. When the military comes to pick up the doctor his wife (Julianne Moore) goes with him even though she hasn’t lost her own vision. Those in the facility have no contact with the outside world other than the daily food drops made by the military.

No one in the facility has a real name. Moore plays the wife, there’s a prostitute, of course the doctor, the thief, and others. This can be confusing because it initially feels like we, the viewers, aren’t supposed to connect with any of these people. Since we can see the filmmaker have taken something else away from us in order to make us connect with the characters in a different, more basic and visceral way, similar to how the characters have learned to connect with each other. Add to that the blown out whites and some creative milky white transitions and suddenly the audience is experiencing the film similarly to the victims, albeit on a minor level.

These people are starving, going through a traumatic event in their lives, and they’ve had no training on how to handle even the most basic tasks as a blind person. Things take an even darker turn when a new resident pulls together his own group of people who decide they will rule the facility and everyone else will have to pay for food. The film for the most part is extremely bleak and humorless, and from this point on the story just gets much worse. Often Blindness is tough to watch, and the payments these people are forced to make brings some of the most intense, almost nauseating scenes. People learn to survive in many different ways and situations like this one can bring forth personality traits that may never have risen to the surface had the pandemic not happened.

The wife does have site, but she’s outnumbered and the man most responsible for the mayhem in the facility does have a gun. Wife is going through her own character evolution. She starts out as the wife of a fairly wealthy doctor. She likes to cook and have a little too much wine at night. She has to become a leader and she has to learn to fight. Her husband also finds himself changing. Due to his blindness his wife is now taking care of him more like a child than a husband and he feels like he’s lost his manhood. The scale of the film changes from claustrophobic to epic but these smaller character developments and the moral questions of humiliation versus survival and how far a person should go to survive keep the film grounded and even without names begin to attach us to some of the characters. All of this happens slowly but the film is slow paced so the more precisely placed changes fit the atmosphere of the film.

Blindness is a long film that has many moments where the characters just try to survive without any big plot movements and that works for me but it may irritate some viewers. These scenes I believe are important because they illustrate with great clarity how these people have changed and how they now have to live. There’s no humor in the film and that makes sense because there’s nothing funny about the new lives these people have to live. Sure, as far as post-apocalyptic films go Mad Max has plenty of moments of levity but the people in that film have been living in that world for many years and they’ve had to create lives for themselves. Everything in Blindness is fresh and new and outside of not having gas or electricity these people suddenly have lost one of their senses.

Blindness is gritty, dark, and melancholy, but there are moments of hope and moments of beauty within the tragedy due to the gorgeous cinematography and editing. This is a tough film to absorb but the bits of hope will keep you going and the social commentary and questions it asks may make you come back for a second look. Julianne Moore is set up to be the glue that holds this film together and she does a solid job in the role. Her character evolution may be the most subtle but her leadership and her reactions to visual scenes do a solid job at bringing us into the world. Blindness isn’t perfect. One issue is why aren’t there sited scientists coming into the facility in airtight suits examining these people toward the beginning of their incarceration? Also, Danny Glover has a monologue at the beginning of the film that is simply there to catch the audience up with what’s been going on in the real world. It’s wedged into the film uncomfortably and he delivers the lines as if he’s reading a bedtime story. Aside from those complaints, this film is a challenging accomplishment that should be seen by everyone.

The film is presented in widescreen and it looks solid overall. The constantly changing color pallet and lighting make this film a real challenging one to bring to DVD. One scene finds the white’s purposefully blown out and the next scene features warm yellow lights and there’ll be another that’s nearly pitch black. Overall the film comes off solid with some grain and some softer detail being the biggest problems. This film requires a high definition presentation and hopefully we’ll get it soon.

The Dolby Digital 5.1 presentation is crisp and clean but several times during the viewing I had to pump the volume to hear some of the dialogue. Nothing’s more irritating than riding the volume while trying to enjoy a film. Surround speakers get some use but nothing phenomenal. What’s most sad is that the director just focused on the visual aspect of the film. There was a great opportunity to tune the audio of the film to match the way the newly blind people hear things. Their hearing doesn’t immediately get better but they do find themselves paying more attention to audio detail.

The single disc DVD comes packaged in a standard amaray case with very unremarkable artwork. This film deserves more attention to detail than it received for cover art.

For bonus features there are some deleted scenes and a lengthy collection of featurettes. Watching the featurettes via the “Play All” option makes them feel like one feature length documentary that covers nearly every aspect of the production from early coaching of cast to play blind parts to shooting and even a screening for the author of the book upon which the film is based.

There’s no commentary which is a huge mistake but the featurettes offer a ton of great information. The best parts are the early featurettes covering the work the cast did to learn how to interact with their environments as a blind person.

There’s not enough here. There should be a feature commentary from the director, an interview with the author of the book, and a ton more. Hopefully there’ll be a hi def release down the line with more features. As it stands the featurettes do offer some good information.

Blindness is bleak even repulsive at times and it’s a must watch. The film is well acted and beautifully shot. Flaws aside the film still offers a lot to think about the world in which we live. The bonus features just needed more attention. 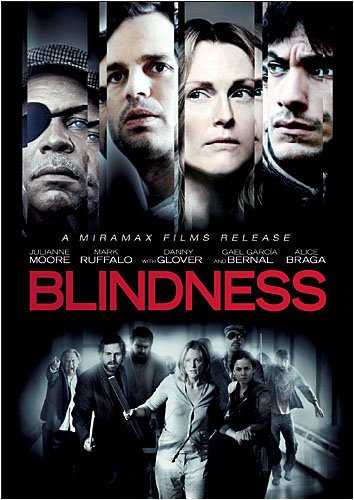