The much hyped and highly controversial end of Grant Morrison’s Final Crisis promised to change the world of the DC Universe. As readers, we were supposed to be shocked knowing that the DC Universe we knew and loved would be different. Morrison fell flat on this promise and left us with only the shock of having spent $3.99 on this misguided attempt at epic storytelling.

Final Crisis #7 is the last book in the rather long crossover event Final Crisis. This story chronicles Darkseid’s resurrection and attempt to control mankind with the Anti-Life equation. I will admit that I bought into this story hook, line, and sinker. In all fairness, the Final Crisis started off rather slowly. I am perfectly fine with this fact, but many felt that the work was stagnant. Having been a fan of Morrison’s work on Animal Man and Arkham Asylum, I gave him another chance at superhero books after his dismal effort on X-Men. Morrison delivered in the middle having Darkseid enslave the whole world using the fabled Anti-Life Equation. I was in awe and loved every issue.

Sadly, the honeymoon died with this issue. Instead of having an epic superhero battle, we get whiny dialogue and confusing Morrison storytelling. I hate when an author makes us feel inferior to their ideas and interpretations. Morrison does this throughout Final Crisis, but painstakingly so with the final issue. I honestly could not figure out what was going on. A writer must engage the reader with complex ideas that can be understood. Morrison fails miserably. Morrison’s reputation of being edgy fails when he gives us a clichéd ending of good always wins. Even this message is shrouded in hard to understand plot.

With the convoluted plot, Morrison also kills Batman. That’s right, Batman is dead. This screams 1990s gimmick. In addition, every comic fan knows he will return. This cheapens the idea and falls into mediocrity. Perhaps the worst crime that Morrison and DC editor Dan Didio commit is bringing back Barry Allen, the silver age Flash, from the grave. This is comic book blasphemy! Barry Allen died in the original Crisis on Infinite Earths to save everyone. This makes the sacrifice in vain and negates the importance of the original story.

Every good thing I had to say about the previous issues of this series died with this issue. I felt confused, used, and that Morrison was laughing at the fans of the DCU. While I still respect his previous work, this issue makes me want to stay away from any of his new material. Don’t even get me started on Batman R.I.P. *shudder*

The only saving grace of this series was the wonderful artwork. Each character is painstakingly drawn and inked to look perfect. The colors are bright and well done. However, the beautiful artwork is shadowed by odd marketing decisions. This issue has 2 covers. I hate this practice and feel it cheapens the medium of comics. The artwork would be better suited on a nice monthly book, not this farce of an epic.

One of my complaints is the interpretation of Darkseid. Characters should fit an archetype and Darkseid looks like himself only in complexion and headware. However, the artwork is indeed superb. 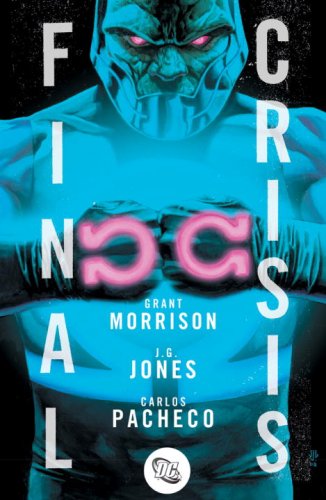