Mary Poppins proves to be one of those rare movies that is just as magical now as it was when I first saw it as a kid.

The fantastical story story of Mary Poppins, Bert, Jane and Michael set in turn of the century London is probably familiar to most but just is case; the story opens with Bert, played by Dick Van Dyke, breaking down the fourth wall and walking us down Cherry Tree lane to the Bank’s residence where we learn that Jane and Michael, played by Karen Dotrice and Matthew Grubber respectively, have gone missing for the fourth time this week. This is simply to much for Katie Nanna, their nanny. When Mrs. Banks returns full of exuberance but somewhat distracted from a suffrage rally Katie Nanna gives her notice while she informs Mrs. Banks that she doesn’t know where the children are. As Katie Nanna is leaving she bumps into Mr. Banks returning from work at the bank. Mr Banks, David Tomlinson. Mr. Banks is more cross than worried when he finds out Jane and Michael are missing and we find out that Jane and Michael have a way of going through nannies, our in the last six months. Jane and Michael soon are brought home by a constable, it seems their kite had gotten way from them in the park. Mr. Banks decides that Mrs. Banks has not used good enough judgment in hiring nannies and takes it upon himself to interview the next one and dictates an ad to Mrs. Banks to be placed in the Times. Jane and Michael trying to be helpful supply their father with an ad for what they think would be an acceptable nanny. Mr. Banks is dismissive of the children’s ad and after sending Jane and Michael upstairs to bed tears it up and throws into the fireplace.

The next morning there is quite a gathering of prospective nannies on Cherry Tree Lane. Jane and Michael looking out their window are quite perplexed that none of the candidates appear to match the ad they had presented to their father. To their wonderment a strong wind comes up and literally blows all of the nannies away. In with the wind comes Mary Poppins who enters the interview for the position with Jane and Michael’s patched ad for a nanny. Seeing the ad that the previous night he had ripped up and thrown in the fireplace in Mary Poppins hand distracts Mr. Banks and instead of him interviewing Mary Poppins she ends up interviewing him. She decides to take the position but informs Mr. Banks that they are on a weeks probation. Jane and Michael are enchanted by Mary even though the first thing she has them do is pick up the nursery, then it’s of to the park where they run into Bert. Today Bert, a jack of all trades, is a drawing pictures in chalk on the sidewalk. Jane is particularly taken with one of the English countryside and after a clumsy attempt by Bert, Mary Poppins pops them into the picture where they all have a bit of a holiday. The first of several adventures the children will have with Mary Poppins and Bert.

Of course you can’t talk about Mary Poppins with out talking about the wonderful songs by the Sherman brothers. From the iconic Supercalifragilisticexpialidocious and Feed the Birds, to Fidelity Fiduciary Bank, there is not a bad one in the bunch and the cast performs them beautifully. And what a cast, Julie Andrews and Dick Van Dyke are of course wonderful, but David Tomlinson manages to steal most of the scenes he’s in as the stuffy uptight banker. Even the children, Karen Dotrice and Matthew Grubber are perfect. Just the songs, dancing and slapstick humor would be enough to make this movie a classic but what makes it truly great is the narrative the stitches it all together. Screenwriters Bill Walsh and Don Digradi took a bunch of songs that the Sherman brothers wrote for Walt Disney based on the Pamela Travers book and crafted a tale about distracted parents who were letting the childhood of their children slip away from them. Not exactly a unique tale but a universal one that most kids and certainly all parents can identify with. Mary Poppins real magic isn’t her traveling on clouds or jumping though sidewalk drawings or speaking with animals but in bringing families together.

The video is presented in wide screen format and it looks wonderful. It’s amazing how good the special effects still look, the scenes that combine live action and animation are flawless, I find myself watching them over and over trying to figure out where the animation stops. The print the transfer was made from is perfect; I never noticed any dirt or other flaws. The colors are sharp and everything is nice and crisp. I never noticed any kind of compression artifacts.

The audio is presented in your choice of Dolby Digital 5.1 Surround sound or the original Stereo mix. There are also French and Spanish language tracks along with English, French and Spanish subtitles. The audio is great and well mixed the music never overpowering the dialog. I never noticed any distortion or any other sorts of defects.

This two disc edition comes in an embossed card board slipcase. This artwork maybe a bit fussy but it fits the subject matter. The copy is accurate and appropriate. There is quite a bit of bonus material which includes an audio commentary. The audio commentary is provided by Julie Andrews, Dick Van Dyke, Karen Dotrice, and Richard Sherman, half of the Sherman Brothers songwriting team, archival audio from Walt Disney, Bill Walsh, producer and screenwriter, and Robert Stevenson. There is even a subtitle track for the commentary. There is also a trivia pop up feature that gives more details about the movie as you watch it. The story of how the movie came about is as interesting as the actual movie and the making of materials included explain the trails Walt Disney went through to get the rights to the material and the creative process that went into converting the books by Pamela Travers into the movie. There is also a good bit of material about the Broadway Production Mary Poppins and a new animated and live action short staring Julie Andrews.

This is a story I always loved as a child and it delights me that I find it as much if not more entertaining as an adult. 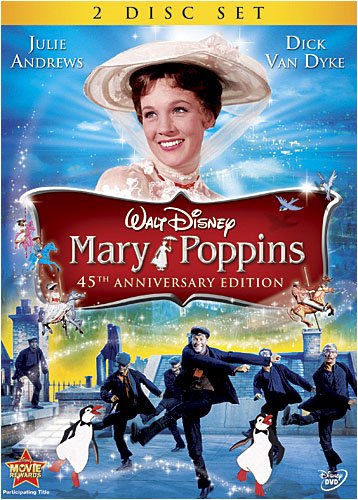