Dexter is a show that I tried to watch when it first began airing on Showtime but just didn’t stick with it. I was expecting something dark and scary but the show is actually dark and quirky, even humorous at times. Some of the characters are even over the top in a campy way. So, because the show didn’t match my expectations, I guess I just gave up on it. I was happy to give the series another shot on blu-ray though.

Dexter is a blood specialist working for the Miami police department. He’s also a serial killer. Dexter, like other serial killers is very specific in the kinds of victims he chooses. He seeks out villains, other serial killers, rapists, and other such ilk and he carries out a unique type of justice on them. Some people would probably say that Dexter is doing Miami a favor by taking out these horrible people but at the same time, Dexter is one of the worst of the villains. Eventually, throughout the season the reason Dexter chooses the victims that he does is because he was trained to do so by his police officer father. Dexter’s father realized early on their was no changing the way Dexter is so he helps Dexter learn to control his urges and when he needs to exert them, who to choose to kill.

Dexter has a sister working on the police force who constantly comes to him for help. Being a criminal himself, Dexter has a keen sense of what another criminal will do. Also being a forensics expert doesn’t hurt. Dexter also maintains a relationship with a woman and her two kids. Dexter doesn’t truly have any feelings for anyone so he appears to be in the relationship more for a social experiment than anything else. He also hopes the relationship will help him appear more “normal”.

The story becomes more intriguing for us and for Dexter when a new serial killer comes to town that knows about Dexter’s extra curricular activities and wants to “play” with Dexter. This new killer even seems to be mocking Dexter with the way he chooses to kill his victims. Dexter is a blood expert and these victims are completely drained of blood. So, Dexter sets out to track down the killer as do his sister and the rest of the Miami PD. Of course, Dexter doesn’t want this mastermind arrested. Dexter wants to find him and give in to his urges.

Michael C. Hall, who was great in Six Feet Under, is fantastic in the lead role. He’s creepy and cold and sarcastic and angry, sometimes all at the same time. Jennifer Carpenter is odd in this season as Dexter’s sister. Sometimes she’s great and other times she seems uncomfortable in the role, and in her costumes. David Zayas plays sort of a typical TV cop, very reminiscent of the show Homicide actually. Julie Benz as Dexter’s girlfriend is warm, sweet and quirky making an interesting parallel to Dexter’s cold and calculated personality.

I’m glad I gave this series another shot on blu-ray because the drama and suspense are gripping, the horrific elements are effective, and even the campier elements seem to fit into the series as it progresses. The production is also bright and colorful, well representing Miami, but also dark and brooding when necessary.

The series is presented in full 1080p here and it looks outstanding. Black levels are deep and rich and on the opposite end of the spectrum whites are clean and bright. Color in general is outstanding in these episodes and that’s a good thing considering the variety of colors and textures in the series. Speaking of textures the detail levels of this season is fantastic. The only complaint about this season is a bit of grain here and there particularly in darker scenes. Otherwise, this is a near perfect presentation.

The Dolby TrueHD 5.1 presentation offers solid bass and good surround usage. Dialogue is clean and easy to hear throughout the season with the minor exception of some of the narration feeling a little muffled at the beginning of the season. Overall, the sound quality seems to improve as the series progresses. The sound presentation doesn’t stand out as being unique in any way but it’s one of the best television series to DVD presentations available and in that way I guess it is unique.

The blu-rays are presented in a standard slim blu-ray amaray case common to blu-rays and that’s a good thing. This season won’t crowd your shelf with unnecessary packaging. With that said, the art on the cover is just OK. It features Hall and a dead hand.

The only bonus features I was able to look at were the two audio commentaries. The commentaries offer a nice balance of information with one of them featuring several of the show’s actors discussing the series from their perspective and a second commentary featuring producers covering the more technical perspective.

There were supposed to be several other bonus features that were to be made available via the BDLive web option but none of them worked for us yet. It’s frustrating because at least some of these BDLive features were offered as standard supplements on the DVD’s. It feels like these extras could have easily been put on the blu-rays, but they weren’t in order to make the presentation feel more cutting edge by forcing us to view them through an internet connection. Since the features didn’t work, I have to rate the supplements based on what I was able to see.

Season One of Dexter was much more entertaining than I initially expected and it’s probably because the pilot feels a bit uneven compared to the episodes that follow. Once the show found its pace, Season One was very entertaining and Season Two and Three must turn into a “must see” series. 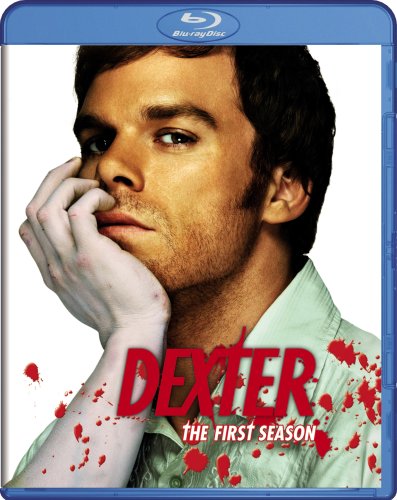