This double disc set is the fifth movie in Paramount’s Centennial Collection and the fourth one featuring Audrey Hepburn. This time playing opposite George Peppard as Holly Golightly a young woman trying to get by in New York City.

The movie opens with a long morning shot of an empty 5th Avenue in New York City. As Johnny Mercer and Henry Mancini’s Moon River plays a solitary cab floats down the street and stops at the corner of 57th and 5th in front of the marble facade of Tiffany’s. A lone figure emerges from the cab in a simple black dress and pearls to do a little window shopping while sipping coffee and enjoying a croissant. This is of course Holly Golightly enjoying one of her “breakfasts at Tiffany’s”. Holly finishes her breakfast and continues down the empty street as the credits roll. As the credits finish Holly is crossing a residential street to her flat. She notices a man sleeping at the wheel of a big black car. Upon noticing the man she picks up her pace, but she has been spotted. The man jumps from the car and chases after her. Holly is ringing her upstairs neighbor to let her in, as the man catches up with her. Turns out he’s not a bill collector, process server, or long lost relation but her date from the previous night. She scurries away from him up the stairs as Mr. Yunioshi, her upstairs neighbor played in yellow face by Mickey Rooney, complains loudly about being woken to let her in. She beats her suitor to her door and leaves him protesting outside that he’s got “rights”. After all didn’t he pick up the tab for her and her friends, didn’t he give her fifty dollars to go to the powder room? Doesn’t that give him “rights”? He’s not crass enough to say it but there are no doubts as to just what he means by “rights”. After he leaves Holly steps out to mollify Mr. Yunioshi with the possibility of letting him take those pictures they had discussed. It appears that our Holly is a bit of tease, if a beautiful and elegant one.

While sleeping off the effects of the previous night Holly’s slumber is broken by someone buzzing from the downstairs door. It’s her new neighbor, Paul Varjak, played by George Peppard. His agent sent him the upstairs key, but not the downstairs key, Paul explains to the sleepy Holly, and before she can return to bed he asks if he can borrow her phone as well. He explains that he was supposed to meet someone at ten and asks if this is indeed ten o’clock Thursday morning. He’s just flown in from Rome and he’s not sure if he has not bungled the time. This sends Holly into a flurry, she explains that she has a meeting that she must attend at ten forty five and they are very strict about visiting hours. As Holly prepares herself to go out she explains she is meeting a notorious gangster at Sing Sing. She explains that for visiting him once a week he pays her one hundred dollars, or more precisely his lawyer pays her after she relays to him the weather report. As Paul escorts Holly outside to grab a cab they are met by the party Paul was to meet, a lady Paul introduces as his decorator, played by Patricia Neal.

Later that night Holly retreats to the fire escape to elude one of her dates who has become a little more amorous than she is comfortable with. She climbs the fire escape and peeks into Paul’s bedroom window to spy Paul’s “decorator” counting out three one hundred dollar bills and placing them on his desk by the bed, then slipping quietly out. Holly slips into the room waking Paul who is alarmed until Holly explains to him that it’s okay the other women has left. Holly sits at the desk, picks up the money and asks Paul if he gets paid by the hour, week or what. Of course Paul takes offense but Holly assures him that it’s okay that she understands and indeed she does. She coaxes out of Paul that he is a promising writer who’s career has stalled after his first collection of short stories was published, leading to his present predicament. When pressed for details of her own past, Holly gets snippy and leaves in a snit. The next morning Paul finds a note on his letter box apologizing for the previous night and inviting Paul for cocktails at her flat that evening. Paul shows up to find a swinging party and gets introduced to the crowd that Holly hangs out with, agents, models, rich middle age playboys and all manner of hanger-ons. Holly eventually ditches the party with the ninth richest single man in New York under fifty on her arm right before the police show up to bust up the party.

Of course being neighbors and surviving under somewhat similar circumstances the two become friends, but Holly’s vague need to become somebody blinds her to Paul’s growing affection. As Paul works toward gaining his independence Holly perceives her only salvation to be in finding a rich husband. Unfortunately the type of fellows willing to give a girl a fifty dollar bill for the trip to the powder room or for or the taxi ride home aren’t exactly looking for a wife. Adding to her desperation is news that her brother, described as “sweet and vague and terribly slow”, is getting released from the army in four months and will have to reenlist if she can’t support him.

The movie is based on a novella by Truman Capote, and it’s a little shocking when you think about it that it was released in 1961. After all, if you strip away the charm, fitted suits, trips to Tiffanys and gowns by Givenchy your left with a story about a whore and a gigolo falling in love. But Audrey Hepburn and George Peppard play their parts with such class and dignity that the facts of exactly how they support themselves kind of floats over your head even as Patricia Neal is counting out the cash and placing it on the desk by Paul’s bed. I guess the only way that they got away with it is that Holly just receives money from her dates for trips to the powder room, I am assuming there is somebody in the powder room that gets tipped giving the ladies a reason to ask for a bit of cash, but it’s hard to believe gentleman will continue to contribute to the powder room fund if there is not a little quid pro quo going on. I don’t know how realistic these characters are, but they are quite believable, due to the craft that went into the screen play by George Axelrod and the skill of the actors.

Blake Edwards did a wonderful job directing the movie, not only in the technical sense of getting the scenes setup and shot, but of drawing wonderful performances out of everyone. Everybody from Patricia Neal who purchases Paul’s services to Sally Tomato the gangster that Holly visits in Sing Sing, plays their part perfectly. And of course Hepburn and Peppard are wonderful as the leads. In the bonus features it is mentioned that Capote actually imagined Marilyn Monroe for the role of Holly. If I put my mind to it I can imagine Marilyn playing the part, even doing a great job with it, but it would have been a very different movie. There is one role that does jar, not enough to ruin the movie but it is cringe worthy. I imagine it wasn’t a big deal in 1961, but today it just seems wrong on several levels. It’s the role of Mr. Yunioshi played by Mickey Rooney. The part is played by Rooney in yellow face, exaggerated buck teeth, coke bottle glasses and a horrible fake accent. The part would have only been less jolting if it was played by someone that actually was Japanese. The fact is there was no need for the character to be a specific ethnicity. The character is supposed to provide a bit of slapstick humor and that could have been accomplished no matter what the ethnicity of the character. Thankfully the character while important to the function of the story is not really a featured role and only has a few scenes. Mr. Yunioshi is the only wrong turn in what is otherwise a nearly perfect movie.

The video is presented in wide screen format and like the other selections in Paramount’s Centennial Collection it is stunning. It’s got the Technicolor color palette, which does date it, but I couldn’t imagine it any other way. The detail visible however is incredible. There is a bit of grain in the background of darker scenes, but the foregrounds are always crisp. The print used in the transfer is perfect. I never noticed any scratches or any defects. The only compression artifacts I noticed were some slight moire, but i had to look for it.

The audio has been restored as well and in presented in Dolby Digital 5.1 Surround in English or in the original mono in English, French and Spanish. There are subtitles in English, French and Spanish as well. The sound is wonderful which is fortunate, it would be a tragedy if the wonderful score by Henry Mancini wasn’t reproduced as perfectly as possible. I never noticed any distortion or any other kind of compression artifacts or problems.

This double disc edition comes in a single width Amaray case with a cardboard slip cover. The artwork matches the artwork on the other Centennial Collection releases. It is simple and elegant. Black with gold trim with a small iconic image from the film and the front and appropriate copy on the back. The menu’s are common with the rest of the Collection as well. There is a second disc containing all of the extra features, except for the audio commentary by producer Richard Shepherd. There are ten bonus features including, a featurette covering the Asian communities contemporary response to Mr. Yunioshi, a making of featurette, a featurette about Henry Mancini, and other subjects. They are all interesting, but are a all a little uncritical, not that I expect them to trash their own movie but some independent criticism or history from someone that isn’t touting the company line would be nice, but that’s getting a little nit picky.

A simply wonderful story gorgeously shot and beautifully acted. One of Hepburn’s best performances and probably Peppard’s greatest. I’m proud to have it in my collection. 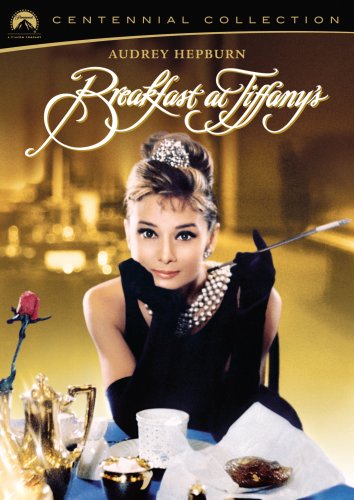