On Blu-Ray: Friday the 13th Uncut

Every era has at least one iconic character that represents the boogie man whether it’s Dracula, Frankenstein, Michael Myers, or Freddy Kruger. While there were a few in the 70’s and 80’s it’s hard to deny that through 80’s Jason Voorhees from the Friday the 31th films was one of the most recognizable horror movie monsters. The movies have been on tape and on DVD many times but now just in time for the release of the new film to theaters we get the classic first film on Blu-Ray.

When Cunningham and crew sat down to create this little film which they call a “pot boiler” the story wasn’t as clichéd as it would later become. They even admit to having watched Halloween for influence and inspiration but the camp counselors and the killer that are the basis of this story are much more obviously ripped off by future films. It’s hard to believe that someone doesn’t know the story of poor Jason Voorhees. As a young child Jason is ignored at Camp Crystal Lake as he drowns by counselors that are busy having sex. Those counselors are murdered and years later when the camp reopens the murders begin again.

The movie isn’t deep at all but it is scary. The score is a true piece of classic movie music right up there with the theme of Jaws and Halloween. In fact the music from Friday the 13th might actually e even more popular or well known than from those films. The music stingers remain some of the best in the genre. Tom Savini created some truly memorable special FX sequences in Dawn of the Dead and he followed that up with the classic killing of Kevin Bacon. Friday the 13th had a job to do as a low budget horror film and that job was to be gory, be titillating, and to give audiences a good time for 90 minutes. It did just that, but it also went on to influence the horror genre all the way to now.

True hardcore fans of the genre must own this film, nuff said. Die hards will be excited that this is the “uncut” version of the film restoring about 14 seconds of gore that was originally cut and hasn’t been available on home video until now. More casual fans must have at least seen this movie because it’s just so influential. Overall the movie still holds up even nearly 30 years later. Yes some gags come off flat or silly and the film still has a definite 70’s feel but due to filmmakers like Quinton Tarantino and Rob Zombie the tropes of that decade feel fresh again.

This blu-ray presentation is easily the best the film has ever looked. Darker scenes feature details that probably haven’t been seen since the film was in theaters. By pushing the brightness as far as possible the film does get a bit washed out and grain is even stronger. Wile it would of course be better if the grain was reduced its existence does make the film feel even more grindhouse like. While far from a true restoration this is the best this film has ever looked.

This TrueHD 5.1 presentation is extremely disappointing. Dialogue is low in the mix, high end is ear piercing, and there’s no bass to speak of. Also, there’s no surround use in this 5.1 mix! The original mono is also available on the disc and it sounds about the same as this modern hi def audio presentation. It gets the job done but doesn’t do much more than that.

The blu-ray is packaged in a standard slim blu-ray case with artwork that plays off the original poster with the “uncut” added to the proceedings. Much of the bonus material here is brought forward from an earlier release but there are a few new items for this release.

There’s a commentary that was recorded for a previous release of the film on DVD that features segments with the director, the editor, the composer, and some of the stars. The commentary is choppy and a bit off putting at times because these are “segments” and not a true commentary that flows with the participants watching the film together. With that said there’s a ton o great information in the commentary making it a must listen for fans.

There are four featurettes that were created to compliment the already existing Crystal Lake Chronicles documentary that was a part of the 2005 release. Since the original documentary was taken into account when these new featurettes were made everything in these short documentaries is new or at least different information. All together the four featurettes, Fresh Cuts: New Tales from Friday the 13th, The Man Behind the Legacy: Sean S. Cunningham, Cast Reunion, and Secrets Galore Behind the Gore, run around an hour. The only issue with these featurettes is a bit of repetition from Betsy Palmer. The cast reunion is visually a bit uninteresting as it is a recorded panel from a Friday the 13th panel too. Overall there’s a lot of great stuff in these featurettes including interviews with the cast and crew. Still no Kevin Bacon though.

Crystal Lake Chronicles is the longest of the featurettes running around 20 minutes and brought over from the previous DVD release. Like Fresh Cuts it features interviews with the cast and crew about the making of the film. There’s a bit of repetition but not much. For the most part, as I mentioned earlier, these featurettes all work well together to give a true look at the history behind this film.

Lost Tales from Camp Blood is an extremely odd bonus feature. It’s a newly shot short film featuring young people who exchange awkward dialogue and are then killed by someone who looks nothing like Jason Voorhees. What’s the point? Part 2 of this series can be found on the new release of Friday the 13th part 2 that’s oddly not on Blu-Ray.

Lastly, there’s a hi def version of the trailer. What about some TV spots and some old poster art in galleries? Seems like there was room for the creators of this Blu-Ray to go even further and provide a truly unique experience.

This is one of a short list of truly influential iconic horror films requiring attention from hardcore fans and casual viewers alike. The gore and formula hold up well all of these years later even if they feel a bit clichéd nowadays because they’ve been so heavily ripped off. The film looks about as good as we’ll ever see it on home video which makes this one a sold! 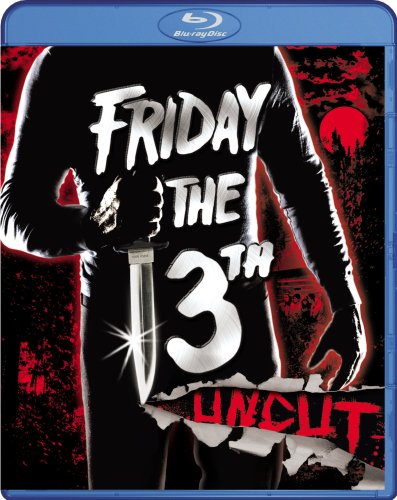