Funny Face is number four in Paramount’s and the third featuring Audrey Hepburn. This fashion fantasy musical, the first of the series in color, finds Audrey Hepburn and Fred Astaire falling in love in Paris.

The movie opens with a dilemma. Maggie Prescott, played by the incomparable Kay Thompson, the editor of Quality a fashion magazine, finds the upcoming issue completely unacceptable. She marches through the surrealistic lobby into her office and calls for all of her assistants. After all of her assistants file into the room she explains just how bad the issue is and why it would be a disaster for American woman, nay women everywhere if the magazine went out like it is. Then in a one woman brainstorming session she hits upon the theme that will pull this issue of the magazine out of the depths of despair. She breaks into song to explain why “Pink” is their answer to everything. Complementing Thompson’s performance of “Think Pink” is a montage of models modeling everything from ballroom gowns to toothpaste. Of course a new issue comes out every month so by the end of the song Quality needs an idea for the next month’s issue.

Prescott has it covered though and has a photographer Dick Avery, Fred Astaire, working on it right now, unfortunately as Prescott and her entourage find out on a visit to his studio, despite a sculpture by Itsubuchi and a string quartet he is just not getting the proper results. It is decided that a change in venue is called for so the whole show piles into a couple of cabs and heads of to find a suitably grubby bookstore in Greenwich Village. They find their bookstore and immediately take over setting up lights and rearranging all the books for their own purposes. The clerk Jo Stockton, Audrey Hepburn, finds all this unacceptable and even after being included in some of the pictures ends up being run out of her own shop. After they wrap up everyone but Dick leaves Jo to the clean up the mess they have left and after Dick steals a kiss he is invited out as well. The stolen kiss however leaves Jo something to think about which in a musical means a song of course.

Upon reviewing the pictures Dick finds only one thing salvageable, Jo. He presents his findings to Prescott who is skeptical but trusting to Dick’s instincts she asks him for some enlargements and places a large book order to lure Jo into the Quality offices. When Jo arrives Prescott and company pounce on her and nearly frighten her to death and she runs, straight into the dark room where Dick is working on her enlargements. Dick explains that he finds her “funny face” interesting, in song of course, and explains that the gig will take her to Paris. Jo is not all that interested in becoming a model but a chance to see Paris is something she is interested in though.

They all immediately leave for Paris. Flying into Orly airport they come in over Notre Dame, the Eiffel tower and the Champs Elysees. Upon landing Prescott, Dick and Jo all profess exhaustion and claim to head to their respective hotels, but they all head out to see the sights of Paris. In a wonderful number they traipse through a number of the more famous Parisian sights and end up discovering each other at the Eiffel tower. The next day though Jo doesn’t turn up at Duval’s the designer whose new collection Jo is modeling. Dick sets out to find her and comes across her in a smoky little cafe talking empathicalism, a philosophy she is quite taken up with. Jo is mortified to learn that she has missed an important meeting but a tiff develops between Jo and Dick when he belittles empathicalism. To express her feelings Jo breaks into modern dance which Dick finds about as impressive as empathicalism. After walking her back to her hotel Dick tries to make up with his own little song and dance number and the two part on good terms.

Dick and Jo spend the rest of the week photographing Duval’s new collection and falling in love but when Jo gets a chance to visit the father of empathicalsim at his salon the night of the big debut of Duval’s collection everything comes to a head.

This is of course a classic, a rare chance to see two screen icons performing together on screen and they are wonderful. Fred Astaire is perfect as the worldly fashion photographer and Audrey Hepburn of course nails the role of young naïve girl opening herself up to the wider world and falling in love at the same time, after all that’s kind of a theme in her career. Kay Thompson does not have many movie credits but she can stand side by side with the likes of Hepburn and Astaire and hold her own. And of course the movie is simply beautiful. It takes place is a parallel fantasy version of our world where smoky Parisian café’s and grubby Greenwich Village bookshops are exactly like you imagined. This is a modern fairytale and you know the ending will entail everyone living happily ever after, but the movie does have it has flaws. The songs by George and Ira Gershwin are great but I don’t find any really sticking to me. I know this could be just a matter of taste or opinion but I should have Funny Face stuck in my head at least while I’m writing the review. I have trouble even remembering some of the tunes after watching the movie a couple of times. I enjoyed them while I was watching the movie but they seem to be somewhat ephemeral. The biggest problem for me though it I could never really buy the romance between Astaire and Hepburn. The story supports it, from their first meeting you get the little clues but no matter how many kisses Astaire steals there’s never any real heat. There is just no jeopardy or tension in a romantic comedy unless you truly believe your protagonists are soul mates and as talented as Astaire and Hepburn are they never really sold me on that fact. Even with these flaws, which would doom a lesser film, it’s still a classic.

The video is presented in Vistavison, Paramount’s first crack at a wide screen format. Like the other selections form the Centennial Collection this is not just a transfer but a thorough restoration and like the other Centennial Collection offerings it is absolutely stunning. There are zero problems with the print, no dirt or blemishes, no graininess or anything like that. Check out the original trailers on the second disc to see how good a job Paramount did with the restoration. The colors are beautiful in that wonderful saturated early color movie way, it’s not just in color it’s in SuperColor. There is a little bit of moiré here and there but it’s never really an issue and I never noticed any blooming even with the intense reds that are in some scenes. Compared to the other Centennial Collection releases the image is a little softer, whether this was just a feature of the color film or aesthetic choice I like it, the others could be a little too sharp at times. The other movies in the Centennial Collection set a high bar for image quality and this one measures up.

This double disc edition comes in a single width Amaray case with a cardboard slip cover. The artwork matches the artwork on the other Centennial Collection releases. It is simple and elegant. Black with gold trim with a small iconic image from the film and the front and appropriate copy on the back. The menu’s are common with the rest of the Collection as well. There is a second disc containing all of the extra features. There are six featurettes included, covering Kay Thompson, Vistavision, modern fashion photography and other subjects. They are all interesting, especially the one on Kay Thompson, but can be a little dry.

A musical with Fred Astaire and Audrey Hepburn should be enough, but add to that a wonderful performance from Kay Thompson and the fact that it’s one of Paramount’s Centennial Collection wraps it up. This really is a must have for movie fans. 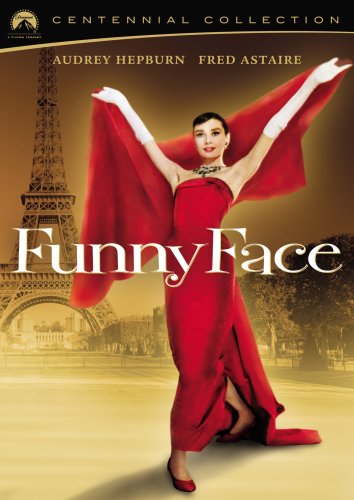