This the film first came out in a very slick HD-DVD version that you can probably find in a discount bin for $3.99 somewhere if you have an HD-DVD player. If you chose the Blu-Ray route then you’re now in luck as Paramount is bringing the film and all the bonus features to that format.

Political Cartoonist Robert Graysmith (Gyllenhaal) became obsessed with the Zodiac killings back in the late sixties as they were happening. He wasn’t directly involved with the reporting of the stories as they came out but he ended up being a sounding board for the reporter that was, Paul Avery (Downy Jr.). Graysmith seemed to have a nose for the situation from the beginning predicting many of the Zodiac’s moves and helping to solve some of the Zodiac’s puzzles, or at least figure out how the Zodiac created the puzzles after they were solved.

This film is able to stick with the procedural nature of the book and still make the main character interesting. Over the years when the murders slow and the letters stop everyone seems to give up on finding the murderer except for Graysmith and one lone detective. Slowly the obsession with the case destroys many lives including sending not just one but two people spiraling into drunken retirement and causing Graysmith to lose his family. The parallel to these very humanized characters is the inhuman Zodiac himself. During the height of his killings he is shown simply in shadow and represented as something outside of humanity, something almost otherworldly. What we do get of the killer in depth is the murders he commits. They are grotesque and disturbing, very much in your face compared to the rest of the film. They are very effective in building tension and detailing the fear that the Zodiac caused in the late sixties.

I never realized just how long the saga of the Zodiac lasted and how anti-climactic the finality of the search for the killer was. It started in the late 60’s and finally ended in the 80’s with the case even now open and considered unsolved even though for the most part the case is solved. The ending is the least complicated of the movie, so if you don’t know the story of the Zodiac I won’t give it away.

I also never realized how complex the hunt for the Zodiac got and how many leads the police and reporters found that seemed almost perfect and ended up being dead ends. Graysmith was apparently one part brave and another part obsessive to a life destroying degree. He had built a family and at one point the Zodiac was calling him and breathing into the phone, showing that he knew that Graysmith was chasing him and that he could be in danger.

The thing that makes the movie so fascinating is also the biggest fault of the film, it just runs too long. Here’s the thing though, it’s hard for me to tell you where to cut it down. There’s a lot of information here, about all the work that went into chasing the Zodiac, how the cops, reporters, and on the outside for most of the film Graysmith chased the Zodiac but were never able to pin him down. I have no doubt this film was too long for many viewers but I was riveted. it’s epic in length, and it should be because it’s such an epic story. Other than the length I really don’t have any complaints (and that’s barely a complaint). The acting is fantastic, especially from Robert Downy Jr. and Jake Gyllenhaal. Chloe Sevigny has a small part in the film but she really immerses herself in the world and I didn’t even recognize her at first. Fincher established himself in his early career as someone with a lot of style and skills in editing for style, but in this film he plays it more subtle, with no fast cutting and his artistic style is there but it’s portrayed in establishing the environment and making the night time look beautiful and scary at the same time. I’ve seen a few other movies covering this same subject and none compare to this film. The film stays about as true to the procedure and the characters as possible without straying into heavily pandering territory. Fans of Robert Downy Jr., Jake Gyllenhaal, and David Fincher must see this film as should those interested in serial killers.

This “director’s cut” is only four minutes longer than the theatrical cut and the added scenes are barely relevant. They aren’t bad, in fact one of them adds something to the passage of time but they are just so minor it seems strange to me that they were cut in the first place if Fincher really wanted them in. Why not just call this a 2 disc special edition? Because extra scenes in a movie about a serial killer hints at the potential of some cut back in gore which sells DVD’s. Still, the movie is great with only a few complaints.

The anamorphic presentation is fairly solid with good detail and solid blacks. Detail is strong and the contrast is as it should be. What I mean is that it’s a bit soft but it seems to be purposefully so not due to the transfer but due to esthetic choice. The detail level here is fantastic and the contrast is way stronger than in the previous release. The CGI shots do stand out a bit more in this version than in the first release probably due to the sharper image and better contrast. Basically this presentation is identical to the HD-DVD release.

The Dolby Digital Plus 5.1 presentation is very strong and offers some solid atmospheric effects. My favorite scenes involve the rain, it literally feels like it’s all around you. It’s touches such as that which really make the film feel immersive. Balance is great and dialogue, effects, and score are crisp and clean throughout. It’s no Star Wars but it’s very well done considering how dialogue heavy the film is. Again, if you saw it on HD-DVD then you won’t be surprised by this release.

The single disc is presented in a standard Blu-Ray keep case with some really cool artwork. The artwork is inspired by one of the letters the Zodiac killer sent back in 1969. Points go to Paramount for doing cool art that actually represents the film.

There’s a bevy of bonus features in this set that starts with audio commentaries that feature director David Fincher, Jake Gyllenhaal, Robert Downey Jr., producer Brad Fischer, James Vanderbilt, and James Elroy. The producers and David Fincher really went into detail with this film and it turns out that they investigated these cases themselves in depth for a long time before the movie went into production. All of the participants offer intriguing information that further deepens the viewing experience and are a must for fans of the film.

Under “The Film” the Zodiac Deciphered is a seven part documentary about the making of the film that runs around and hour if all the parts are watched together. This segment features interviews with the filmmakers discussing the process of making the film. Much of this information is covered in the commentary but it’s still a great watch. The Visual Effects of Zodiac is a 15 minute featurette covering all of the visual effects shots in the film. There’s probably more CGI in the film than you suspect. Some shots are obvious but many others aren’t so apparent so it’s interesting to see all the work that went into these shots. Also in this section are some pre-visualizations of key scenes in the film. These are raw CGI shots of the scenes in the film often used as animated storyboards. Finally there’s a theatrical trailer.

Under “The Facts” is a 1 hour 42 minute four part documentary called This is Zodiac Speaking. This documentary is very deep and features new interviews with many people involved with the case including detectives and attack victims. I enjoyed this documentary almost as much as the actual film. Anything you ever wanted to know about the case you’ll find here. Finally the near 45 minute His Name Was Arthur Leigh Allen is a really creepy montage of interviews with friends, family, and investigators.

The extras here are deep and really informative. They can actually make you appreciate the film even more than you might have on first viewing.

I loved this movie, sure it’s too long but how can I complain if I can’t find one thing I’d cut? This is a deep story presented here in an epic way. To me, Zodiac is a must see. Robert Downy Jr. again as is usual nearly every time he is in a movie, deserves some attention for his work. 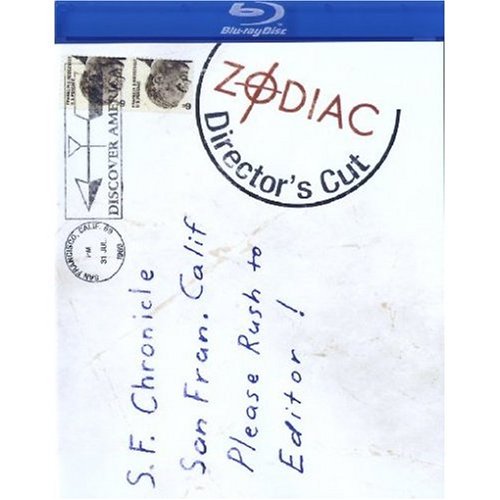