Chris Farley is one of those actors that divides people: either you love him or you hate him. I am one those that saw that Chris Farley could be great if he is given strong comedic material. Tommy Boy is one of Chris Farley’s best cinematic moments. Tommy Boy:Holy Schnike Edition Blu Ray was recently released on DVD by Paramount Home Video.

The shoes of Big Tom (Brian Dennehy) are awfully hard to fill. He runs one of the most successful auto parts businesses in the U.S. While his son Tommy (Chris Farley) loves his dad, it isn’t hard to see that Tommy is an idiot, albeit a lovable one. Big Tom would love to see Tommy take over his company, but Tommy’s brain is oatmeal. Big Tom has employed one of Tommy’s classmates/enemies Richard (David Spade) who knows that Tommy is a disaster with a capital D.

Tommy, the prodigal son, returns home to attend Big Tom’s wedding and to figure out his life. While at the wedding reception, Big Tom has a sudden heart attack, leaving Tommy and his company alone.

Tommy decides he is going to save the company and be the success that his father always wanted him to be and sets out on a sales trip across the United States. Richard tags along on this potentially disastrous trip, perhaps to not only save the company, but to watch Tommy misfire, and have a few laughs at his expense along the way.

When Big Tom’s new wife shows an unexpected side to her intentions, how will Tommy and Richard save the day?

While the plot of this movie could be described as shop worn or clichéd the performances by Chris Farley and David Spade make this a worthwhile watch. Chris Farley is at his most unabashedly silly, lovable and clueless best and David Spade drips sarcasm and wonderfully cutting snarkiness throughout, making a nice cinematic concoction. Spade and Farley are as great as some of the classic duos such as Belushi and Aykroyd and even the classic Laurel and Hardy. In this film the two make you wanna sing with the Carpenters and see a deer rip a car apart. Sure the whole thing is predictable at its base story but it’s not about the destination here, it’s about the journey.

Bo Derek and Brian Dennehy turn in fine performances. Remember, this movie has to be carried by the personalities and charisma of its participants, not a plot that isn’t going to set the world on fire. Even Rob Lowe is great but he may just be playing himself in this particular film.

So, if you are looking for an intricate plot, check out another film but if it is Friday night, and you have a beer, pizza and some friends and you need a few laughs, this is the film to pull off your shelf. Before there was Step Brothers or Superbad, there was Tommy Boy.

The video quality is presented in 2.35:1 aspect ratio and is a nice looking transfer, albeit not perfect. The colors are vibrant and the level of detail is respectable. While I did notice a bit of grain, the film looks fine in this transfer. Is it representative of the Blu-Ray format? No it’s not but if you don’t already own this film it does look a bit better than the standard def version.

The audio is presented in Dolby TrueHD 5.1. The dialogue is clear, although there are times when the soundtrack is a little heavy in the overall mix. Also the surround usage is fairly minimal for a hi def mix.

The film is presented in a standard Blu Ray case with artwork with silly Chris Farley and snarky David Spade on the cover.

There is a nice amount of bonus material to explore here. First up, a commentary with Peter Segal that is an entertaining listen. Next up are four making of featurettes, deleted scenes, alternate scenes and extended scenes are offered. Also, storyboards, a photo gallery, a gag reel and theatrical trailer are included. Rounding things out some television spots.

All things considered, a great bunch of extras to enjoy after the film is over. There’s no Blu-ray exclusives and the bonus features aren’t in hi def disappointingly. 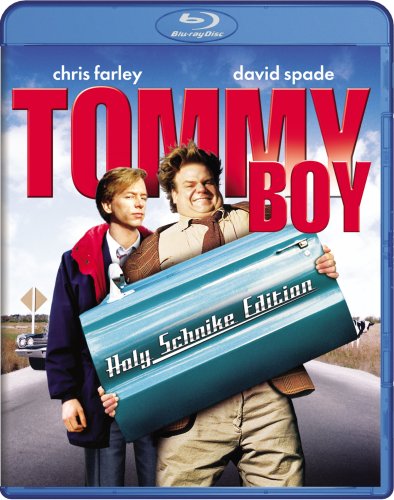