Alexander Aja burst onto the scene with a somewhat flawed but still phenomenal horror opus in High Tension (get the uncut and undubbed import version). After that film, he did a respectable job with the remake of The Hills Have Eyes. His work isn’t necessarily as innovative as it should be or could be, but he’s still a shining light in the cavernous darkness that is American horror film. Yes, he’s French but he’s been working in the United States since High Tension.

Most horror films hitting theaters these days are remakes of films from around the world, most often from Asia. Mirrors is one of those films, unfortunately. With that said, this version of the story is substantially different from the original in a ton of ways, but that doesn’t mean this one’s better unfortunately. Sutherland plays Ben, a laid off police detective who is struggling to put his life back together. After killing a man, Ben sank into a bottle and ended up separated from his wife and kids and laid off from his job. A year later he has stopped drinking and moved into his sister’s (Smart) house and taken a new job as a nighttime security guard for a burned out department store.

The schedule is rough but Ben appears to be settling into his job fine until he begins seeing strange things in the department store. The man who had the job before Ben made it a priority to keep every mirror in the dilapidated building clean and suddenly Ben finds himself being drawn to the mirrors too. He slides into his old role as a detective and beings trying to figure out why all of these strange events are happening. Soon his own family begins experiencing creepy happenings in mirrors too making Ben’s investigation all the more desperate. He must discover the truth about the mirrors before his entire family is destroyed by them.

The character development for Ben is about as over cooked as it can be. Why do so many modern horror movies feel the only way to give a character a story arc in a horror film is to make him/her damaged? This kind of character is too predictable these days. Sutherland gives it his all though; bringing in his brand of intensity to Ben and injecting enough charisma into Ben to make us continue to watch what happens next even though we already know what Ben’s story is. There are some other redeeming factors to Mirrors, mostly consisting of visuals. There are many creepy moments in the film and some nice redirects and camera tricks. A few gags are destroyed by some really terrible looking cgi though. Amy Smart is good here and she gets one of the most memorable scenes in the film.

Mirrors ends up being a mostly by-the-numbers horror film with some standout scenes here and there and a clever plot device in the mirrors. It’s not horrible but it’s not a classic either. Mirrors is a fun rental for fans of the genre and is recommended as just that.

The 1080p presentation features some deep detail and solid color representation. A few times the mostly solid black levels get a bit murky and the purposeful grain causes what appears to be an unintentional gauzy effect. Complaints aside the detail in the department store is stellar and the visual style of the film appears to be perfectly rendered in this high def presentation.

The DTS HD presentation here is a mixed bag. The sound is extremely immersive with action panning across the entire soundstage and more subtle ambient sounds coming from every speaker making the experience overall extremely immersive. The only problem here is the dialogue. When people are speaking the comfortable volume for the louder parts of the film feels too low forcing the volume up and back down again when all hell breaks lose. The presentation is in desperate need of balancing. There’s also a solid standard Dolby Digital 5.1 option.

There’s a theatrical version of the film as well as a slightly more gory (which means better) unrated cut. It’s not much longer it’s just a little bloodier.

The first bonus feature is Anna Esseker Hospital footage. This sequence just offers more background on Anna’s childhood. Why was this not just included in the deleted scenes? Reflections: The Making of Mirrors is an extreme in depth look at the making of the film from its original script to what the film eventually became. There’s cast and crew interviews and behind the scenes footage. Casting, locations, post production, music and much more is all covered in this near hour long documentary. The most interesting part of the documentary comes when the director, producers, and writer discuss their vision for the film and the main character compared to the film they actually made. Apparently, they think they’ve sort of remade The Shining. I don’t see that at all.

There’s also a brief featurette covering the mythology that surrounds mirrors, an animated storyboard sequence, some deleted and alternate scenes, and Bonus View. BonusView is the way commentaries are handled on this Blu-Ray disc. The first commentary is simply a sparse picture-in-picture option where Aja’s storyboards are laid over the left hand corner of the screen when certain scenes occur.

The second BonusView option is a picture-in-picture commentary from director Alexandre Aja and co-writer Gregory Levasseur. While the film is playing and the audio commentary is running, there’s also behind-the-scenes footage running in the lower right corner of the screen. The commentary is enthusiastic and entertaining but much of what the two discuss is also covered in the documentary so there’s a good bit of repeat. The BonusView options are only available for the theatrical version and frustratingly the audio commentary can’t be accessed without the full BonusView experience being active.

The documentary is more than just a featurette because it offers so much information and the commentary, while a bit repetitive, is also worth a listen. Finally, there’s an additional disc that features a digital copy of the film for portable devices. The big question is why are neither of the featurettes in hi def?

Mirrors isn’t going to be one of those horror films that’ll be around in twenty years influencing future releases, but it’s a fair diversion for the horror fan. 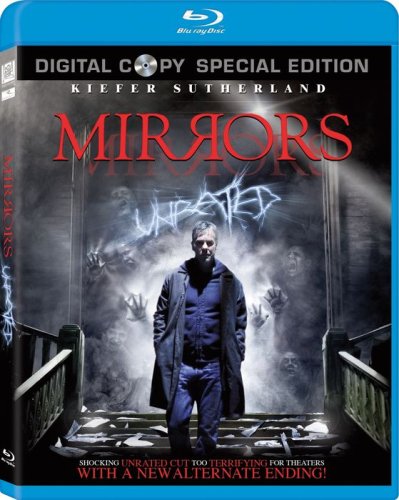